Donald D. Deignan spent nearly 20 years learning the full story of the uncle after whom he is named, who survived the December 7, 1941, Pearl Harbor attack. 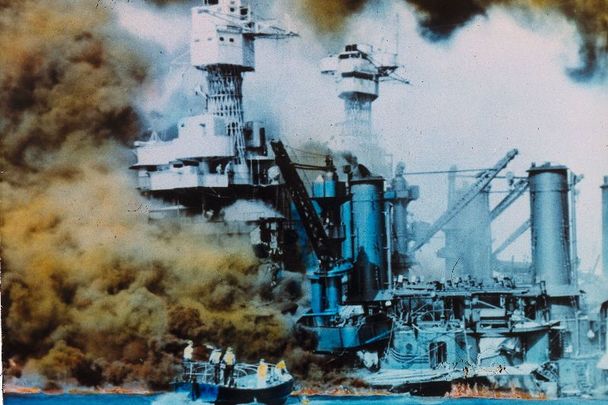 December 7, 1941: American warships on fire in Pearl Harbor, Oahu Island, after a surprise attack by Japanese forces, which brought the USA into WWII. Getty Images

Every year around this time, Providence, Rhode Islander Donald D. Deignan allows his mind to drift back in time across the Atlantic, to the family members who came to the US from Ireland. And across the Pacific, to Pearl Harbor in Hawaii, where one family member changed the course of his life.

“I continue to be deeply grateful for the positive influences which my uncle (Donald) had and still has on my life spiritually, intellectually, and psychologically. Beyond any doubt he helped me…to become the man I am today,” Deignan told the Irish Voice, sister publication to IrishCentral, last week.

Donald D. spent nearly 20 years learning the full story of the uncle after whom he is named, who survived the December 7, 1941, Pearl Harbor attack, on that “date that will live in infamy,” plunging the US into World War II.

“I increasingly regret that America has moved farther and farther away, as years pass, from the sense of common purpose engendered by the Pearl Harbor attack and its aftermath,” added Donald D., who earned a Ph.D. from Brown University, and whose decades of research tell us a lot about his determination.

As does his disability rights activism. Deignan was born with cerebral palsy into a large Irish Catholic family that originated as the “Duignans” in Kiltubrid, Co Leitrim, before fanning out to Scotland and the US

Deignan himself recalls a pivotal moment from the late 1950s when a nun in school read a story to his class about “an aspiring altar boy” in 17th-century Ireland.

“I knew that both he and I were Irish and Catholic…I saw myself in him,” Deignan writes in The Shadow of Sacrifice, a family history he’s published.

It was also around this time Deignan began to learn the basic facts of his uncle’s life – born in Worcester, Massachusetts, in 1915, a “world of tightly packed immigrant tenements…a place of poverty, disease, malnutrition, and high infant mortality.”

Uncle Donald dropped out of high school and once the Great Depression hit, traveled the country working with the Civilian Conservation Corps.

Then he joined the Army and was serving in Oahu, Hawaii, on December 7, 1941.

“My Uncle Donald was a good and decent young man who died honorably in service to our country. In the end, he was simply overwhelmed by circumstances beyond his control,” notes Donald D.

“Much more attention is now being paid to the mental health needs of active duty service members and veterans alike. I’m happy that these sensitive matters are now being openly discussed, taken seriously.”

The Deignan family also serves as a vivid reminder that it wasn’t all that long ago that angry folks believed it was Irish immigrants who were ruining the country.

Which makes the fact that Donald D’s father made it to college – and his son to the Ivy League – all the more impressive.

“My father was, by any standard, a remarkable man and a real American success story. Adversity in childhood, during the Great Depression, and in World War II brought out those traits in him and, again.”

It does sadden Donald D. that Pearl Harbor is fading from American memory, along with a broader agreement “on America’s leadership place in the world and on our obligation to promote freedom and democracy,” which he believes “effectively ended in 2016 when Donald Trump broke so sharply with the values of that prior time period.”

Donald D. has also been a key figure in erecting a Famine Memorial on the banks of the Providence River, serving as a founding member and president of the Rhode Island Irish Famine Memorial Committee.

“My father always regarded education as ‘the royal road to anywhere’ and he traveled its entire length and always encouraged me to do likewise, which…I did.”