Ireland gets serious about climate change 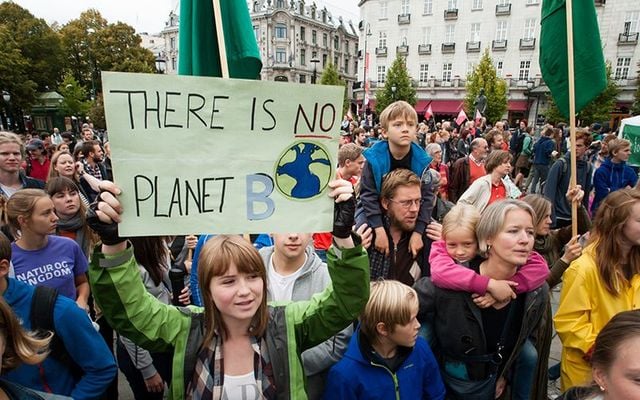 Arriving back at Dublin Airport on Sunday after a week in southern Portugal, our plane took a sudden, alarming swerve to the side as we were about to touch down. Nothing to worry about, just a strong gust of wind, but enough to make everyone on board go woooa!

Worse was to follow when the doors opened and we felt the temperature. It was not just cooler than Portugal, which is to be expected.  It was decidedly chilly, way below what is usual here at this time of year.  And of course, it was raining.

The last month or two in Ireland have been miserable, with everyone complaining that summer has forgotten us this year.  It was miserable before we went on our week's holiday in the Algarve sun and now that we're back it has not changed -- low temperatures, blustery wind, and incessant rain as successive weather belts roll in from the Atlantic.

Read more: Ireland to ban sales of new petrol and diesel cars by 2030

Against that background, it might seem strange to be talking about global warming but as it happens the next day, Monday, the Irish government revealed its master plan for playing our part in dealing with climate change, now universally recognized as the biggest challenge facing the world today.

Well, almost universally.  In weather like we have been enduring a skeptic (and President Trump is not the only one) might say that a little global warming would actually be welcome.  But that is foolish -- this is an extremely serious problem that threatens the future of humanity.

Nor is it just about global warming per se.   We all love a sunny summer, especially in Ireland since we get them so rarely.

It is the consequences of the rise in global temperature -- the unpredictable, often violent changes in established weather patterns, the floods, storms, droughts, forest fires, degraded farmland, melting ice caps and rising sea levels -- that make what is happening to our planet so dangerous and disruptive for so many people.

In some areas of the world part of that is longer and wetter winters, which would seem to fit with what we have been experiencing here so far this summer.   Even the sudden cross-wind that almost blew us off the runway might be a foretaste of what is to come.

Of course, talking about the problem or getting a reusable takeaway coffee cup or voting for Green Party candidates in the election are all relatively easy.  We're all aware of the problem and many people say they want to help.

But the reality is that solutions are far from easy and will come with considerable cost and discomfort attached.  Just how committed people will be to making the necessary changes when they require drastic alterations to their easy and comfortable lifestyles remains to be seen.

What the Minister for Climate Action Richard Bruton unveiled on Monday was just an outline of what lies ahead, but it was detailed enough to be convincing and it made for sobering reading.

As we have pointed out here before, Ireland is bottom of the class in Europe in cutting carbon emissions per capita so we have some catching up to do.  But even without that extra burden, the task is daunting, just as it is for every other country.

The plan is designed to cut Ireland's carbon emissions by 80 percent by 2050 -- in just 30 years -- and the ambition is that soon after that we can become carbon neutral. The plan recommits the government to raising carbon tax from the current rate of €20 per ton to €80 by 2030.

No one here will be spared, the action will affect everyone's daily lives and the changes are coming sooner than people think.  If you are a car driver, homeowner, business person, builder, farmer, office worker, etc., everyone in Ireland will feel massive changes in the next five to 10 years, changes that will be backed by legislation and implemented.

Among the 200 or so action points listed, there were several headline makers. Transport and home heating were to the fore, which was to be expected.

The sale of new diesel and petrol cars will be banned from 2030 and in the meantime, drastic measures, both carrot, and stick will be taken to get people to go electric.   These will include fuel price hikes, banning petrol and diesel cars from town and city centers, a massive increase in charging points around the country, scrappage payments for people who want to get rid of their petrol and diesel cars and so on.

On home heating, oil and gas boilers will be banned in new build homes from 2022 (just three years away!) and 2025 respectively.  In existing homes, the changes will be implemented from 2026 onwards.

A countrywide move to heat pumps (pumping up heat from below ground) will be state-supported and heavy carbon taxes will discourage the use of open fires (the price of coal will double).

A major retrofitting program will be implemented to make homes more energy efficient, and all houses will be required to get a Building Energy Rating Certificate (BER) to a high standard.  To carry out this insulation retrofitting work, homeowners will be able to get state loans which can be repaid over time through their electricity bills or an increase in the local property tax.

Homeowners, along with factories, office blocks, farmers, etc., will be encouraged to micro-generate their own electricity through solar panels, turbines, manure digesters, etc., and people will be able to sell excess electricity back to the national grid.

Single-use plastics, for water bottles, vegetable, and fruit packs and such, will be heavily taxed to force people not to use them and find alternatives (much as we got rid of supermarket plastic bags here in the recent past).  And there is much more, touching on almost every aspect of life in Ireland today.

A lot of this may seem to be hopelessly aspirational.  We have heard this kind of thing before and promises on action were not kept.

But the key difference this time is that most of the actions in the plan are to be backed by legislation which will force people to change their behavior.  And given the new awareness among younger voters about the threat of climate disaster, seen in the Green surge in the last election, this time real change may be possible despite the costs involved to individuals.

One area where Ireland faces great difficulty is agriculture, mainly because of our proportionally huge dairy and beef herds and the methane they emit.  The plan is cautious on this, referring to lowering these emissions by creating new, sustainable opportunities for family farms, more forests and better management of bogs (both of which are great carbon stores).

This seems to hint at an inevitable end to our highly intensive beef and dairy farming but that would come at an enormous national cost, which may explain why the plan on agriculture is so vague.

It would be easy to be cynical about all of this.  Launching grand plans is one thing. Implementing them is something else.

Carbon tax currently is €20 a ton here, and after all the talk since the Paris Agreement in 2016 about how badly Ireland was doing, that was expected to go up to €30 in the last budget.  But nothing was done.

Now we are being asked to believe that it will shoot up over the coming years.  We'll see.

At the moment we're not in a good place, so far behind our agreed targets on emissions that we are facing hundreds of millions in fines by the EU annually.  For that reason alone we need to take action, and quickly.

To avoid these fines we must reduce our carbon emissions by seven percent annually.  The bigger picture, of course, is that the UN experts say we have only a dozen years to prevent temperatures rising by 1.5C or even 2C by 2050, which would be disastrous for the world.  So we all have to do our bit, including Ireland.

There is one area that holds out some hope for us, however.  Ireland is set to almost achieve the target of 40 percent renewable-generated electricity by next year, most of it provided by wind energy.  Stuck out on the edge of Europe facing the vast Atlantic, wind is one thing we're not short of.

Bruton's plan includes a proposal that by 2030, 70 percent of Ireland's electricity would come from renewable sources.  After the landing that we had at Dublin Airport on Sunday, I'm inclined to believe this.

So once we get all our transport changes, home retrofitting and all the other conservation measures completed, maybe a big part of the answer to our carbon problem is blowing in the wind.