Ireland’s COVID crisis - do we choose lives or livelihoods?

As Ireland and the rest of the world continues a fierce battle against Covid-19, John Spain analyzes the Irish government’s strategy. 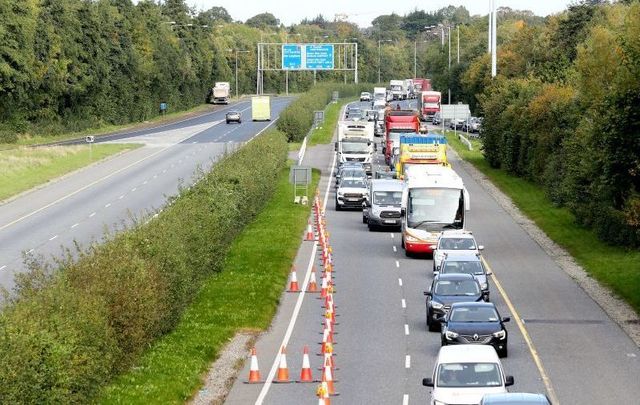 October 7, 2020: A checkpoint on the M11 near Bray. Operation Fanacht resumes as the Republic of Ireland enters Level 3. RollingNews.ie

What do you put first -- lives or livelihoods? Is it possible to strike a balance between the two as the battle against Covid-19 goes on?

That is the difficult question the government in Ireland is trying to answer now, like its counterparts in the U.S., the U.K., and elsewhere.

If you shut everything down for weeks, the economic damage is immense, immediate, and probably long-lasting. And it's not just economics -- we know that lockdown has a huge cost in human suffering, in lost jobs, people going broke, homelessness, despair, even suicide.

If you go the other way, keep everything open and try to behave as normal, the virus spread can be exponential. We know this already from the effect of the partial reopening of our economy two months ago, with schools back, more people returning to work, bars and restaurants serving customers, and so on. Even with socially distanced tables, masks, and all the other restrictions, the uptick in virus cases was immediate and now, two months later, it is accelerating.

It's not a crisis yet, but it's clear we are heading quickly in the wrong direction.

After the initial peak in March when cases were climbing rapidly, we went into full lockdown for a few weeks. That got new case numbers down to 10 or 20 a day and the virus spread seemed to be under control.

Then came the reopening in May/June and the steady climb up again. Last Saturday, there were over 1,000 cases here, the highest daily number since the peak six months ago.

If this goes on we will be in real trouble. As you may know, the expert medical team which advises the government wanted to put the whole country here on Level Five restrictions a week ago, which would have put us back into full lockdown for at least a month.

The government decided not to take this advice. Instead, the whole country is now on Level Three restrictions, with people told not to travel outside their own county, to work from home if possible, to avoid social gatherings, and bars and restaurants only giving outdoor service.

This decision by the government was very significant because it was the first time it refused to follow the scientific advice since the pandemic began. The reason for the decision goes back to that basic question, the trade-off between saving lives and preserving livelihoods.

It's an attempt by the government to find a balance between containing the virus and protecting the economy. Whether it will be enough to keep the virus in check will not be clear for another week at least, but the indications last weekend were not encouraging.

Part of the problem faced by the government is enforcing the Level Three restrictions. The gardai put up checkpoints on all the motorways around the country the day the restrictions came into effect over a week ago.

On the motorways leading out of Dublin, this caused long tailbacks and delays of an hour or more. Drivers were furious. The intention was to get the message through to people to stay in their own county, apart from essential journeys.

But even health workers in city hospitals were caught in the jams around Dublin as they tried to get home to commuter towns. The general feeling was that there must be a better way of getting the message across to the general public.

The gardai have few legal powers to enforce the restrictions, so public buy-in is essential. There has been some talk of introducing fines or prison sentences for people who will not obey the rules, but we can't lock everyone up. Given the scale involved, general support for the restrictions is more effective than enforcement, as it was when we went through the first lockdown.

The problem for the government is that this support is much weaker now, with people absolutely fed up of being restricted and more dissenting voices being heard.  And these doubting voices are not just from the looney fringe who think Covid is fake and a conspiracy to take away their freedom. There is a small but significant number of doctors, scientists and economists here who have doubts about the effectiveness of using partial or full lockdowns to beat the virus.

They point to the fact that although the virus incidence is higher in other countries in Europe right now as the second wave emerges, few if any of them have introduced nationwide restrictions like those now being implemented across Ireland, with even tighter restrictions possibly on the way here. The suggestion is that we are panicking or at least over-reacting.

There are various statistics one can quote to back up this view. Yes, the growth in case numbers here in the last two or three weeks is very concerning. But overall, our figures are still relatively low.

Out of a population of just under five million, we have had 1,826 deaths from Covid since the virus arrived here seven months ago. This was the figure on Monday when there were around 220 people with Covid in hospitals here, around 30 of whom were in ICUs.

The figure on Monday for the total number of confirmed cases here since the virus arrived last February was 42,528. Again, this is a tiny fraction of the population of five million. And of course, the vast majority of these people did not have to go to hospital and got over the infection.

As we said earlier, the worrying aspect of the present situation is that the number of new cases a day was down to 20 or 30 in June/July and over the last few days has reached around 700-800 a day on average. Stopping this growth from getting out of control is the challenge. The question is how far we should go to achieve that.

Those who argue for tough restrictions and even a full lockdown again for a few weeks to act as a circuit break in the spread of the virus are often dismissive of concerns about the effect on the economy. But going back into lockdown again would have a devastating effect and many businesses, particularly in the hospitality sector, would not re-open.

That is why the government rejected the expert medical team's advice a week ago and opted to put the country on Level Three instead. And even that is already having a serious effect on business activity, with the number of workers claiming the pandemic payment jumping by around 60,000 in the days that followed the decision.

Despite this, Tanaiste Leo Varadkar said last weekend that we may have to go into full lockdown soon if the Level Three restrictions don't work. This was beyond ironic given that he was the one who fiercely criticized the medical experts a week earlier for advising exactly that.

Taoiseach Micheál Martin said last weekend that going back into lockdown at this stage is not the way to go because it is too damaging to the economy.  But he did not rule out having to do it in the future. All of which shows the level of disagreement there is in the coalition government about what to do.

There is a strong argument for taking a tough line.  If you are going to act, "go hard and go early" is the mantra followed in New Zealand where they have had remarkable success in combating the virus.

But there is also a growing view here that the economic costs of this are too high and that local measures instead of national measures will be the best way forward.

This would mean increased testing to identify local outbreaks and then hitting them hard and fast with local closures and restrictions, while allowing the rest of the economy to function.

This local/regional approach is already being taken in the U.K. where particular areas and cities have been restricted rather than the whole country. There are varying levels of the virus in different areas here as well. Right now, Donegal has one of the highest and Leitrim one of the lowest, yet the same national Level Three restrictions apply in both counties.

This makes as little sense as applying the same restrictions to an isolated rural pub down the country as a huge tourist bar in Temple Bar in Dublin. Yet that is what we are now doing. There is a growing view here that we need a more nuanced and graduated local approach rather than a national one, a local pincers rather than a national sledgehammer.

Nor is it just a matter of geographical area. A more selective approach can also be applied to people.

The average age of Covid deaths in the U.K. is 82 and it is unlikely to be much different here. Apart from the age factor, we also know that a high proportion of those who become seriously ill with Covid are overweight or obese, and many have serious pre-existing medical conditions.

Instead of making blanket restrictions that apply to everyone, some experts argue that a more targeted intervention would make sense. Old folk as well as middle-aged people who are obese or with medical conditions would be told to stay at home when an outbreak emerges in an area. Everyone else would be free to continue on a lower level of restriction and the economy, including hospitality, would remain open.

This approach would be highly controversial, not least in places like the U.S. where more than one-third of the population is overweight and another one-third is obese. Of course, obesity is a growing problem here as well.  But if we are to preserve our economies while we wait for a vaccine, hard choices like this may be necessary for whoever is in power.