An unusual Guinness record - I’ve never had a pint

Uncle Arthur up in St. James's Gate above in Dublin would be shocked but he should know my duties have been delegated... 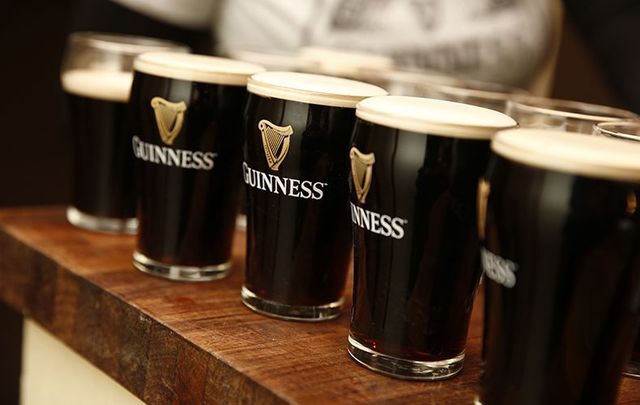 A pint of plain is your only man! Not if you're Cormac MacConnell. Getty

Uncle Arthur up in St. James's Gate above in Dublin would be shocked but he should know my duties have been delegated...

Cead Mile Failte to you all out there.  Hope ye are surviving the Thanksgiving season and are well prepared for the Christmas season, which over this side of the Wild Atlantic Way at least keeps on arriving earlier than ever before for commercial reasons no doubt.

I have a maybe strange enough yarn spinning around my old head which will maybe divert some of you away from all those jingling bells. The yarn is that I am about to formally apply for inclusion in the Guinness Book of Records and am confident of success on that front.

My unique case is that even though I have been a merry and carefree drinker of alcohol for more than a half-century around this island and beyond, including over in the USA where many of you do your carousing, I have not once downed a pint of Guinness, still the most iconic and popular pint in all the bars in Ireland.

I have never ordered a Guinness from any barman.  I’ve never finished any of the many pints of the black stuff that others purchased for me along the Four Green Fields on both sides of the strange border folk keep talking about constantly. And I am not going to change now for certain.

Uncle Arthur in St. James’s Gate above in Dublin, however, will be pleased by the reality that I delegated the Guinness bar chore, long ago, to my three strong sons, Cuan, Cormac Og and Dara, now all seasoned adults who, between them, have downed enough Guinness at this stage, around the globe, to sustain the clan’s honor along the bar.

The truth is that I never liked the taste of Guinness.  My lovely father Sandy drank bottles of it with his friends around our warm Fermanagh hearth, and I think I was about seven or eight years of age when I stole a swig out of my father's bottle, gagged immediately and did not feel well for the rest of the day.

That memory is powerfully seared inside my old brain forever.  I feel reasonably certain ye will soon see me included in that famed Guinness Book of Records.

A drinker’s bar history is relevant to us all. Mine begins, above all places, in the city of Derry, more than 50 years ago, when I was so shocked and stretched by covering The Troubles flaring there after Burntollet that I drowned the Pioneer pin I’d been wearing on my lapel since my teens, at the powerful behest of the Catholic Church, in a torrent of whiskey and any beer but Guinness.

Later still, feeling a bit ashamed of myself for falling from grace, I actually threw my poor Pioneer pin into the nearby Foyle.  But the infusion of alcohol amid all the frightening Derry troubles that month enabled me to submit my stories to The Irish Press in Dublin for the duration of my stint there, and to stay safe and sane.

It’s strange indeed how drinking cultures change.  Back in the young days when I was a member of that Catholic fraternity called the Pioneer Total Abstinence Association, with my pin in my lapel, it was part of my duty to report instantly to the fraternity if I spotted any Pioneer taking an alcoholic drink; he was barred and disgraced in the parish afterward

Back then, in the local pubs where the pints of Guinness lined up in front of the high stools of the drinkers, the only wine seen to be consumed in public was the sacramental wine delivered by altar boys like myself to the priest on the altar at Mass on Sunday.  And rural parish priests were the supreme rulers of their parishioners then, and for many years later. Many of you who were born in that era before emigrating know well this was the reality.

Today, once Uncle Arthur inscribes my name in his Book of Records, I will celebrate the feat at the dinner table, with a glass or two of my favorite red wine, Merlot, and if I venture out to a pub in Killaloe (walking of course as I’ve often warned any visitors), I might have a light beer for starters, probably a Heineken, followed by at least one acridly pleasant gin and tonic with ice and lemon.

And all the Guinness drinkers and acquaintances in the company will be glad to see me but will know well that I’m not a Guinness drinker, whatever about my occasionally visiting sons. And I will walk the short distance home as happy as the fabled Larry. And never ever regret drowning my poor Pioneer pin in the murky flow of the Foyle sweeping through Derry.

It’s quite a gentle November night here in Killaloe and, just writing about booze and boozers and pints of Guinness along friendly bars has tempted me to stop this frothy epistle here and now and venture forth under the lurking moon over Lough Derg. I hope I have your blessing to do that inside the next five minutes.

Meanwhile, be careful out there all of you until we meet again.