Co Armagh man Terry Murphy had the rare opportunity to attend his own living Irish wake, where friends said the "craic was 90." 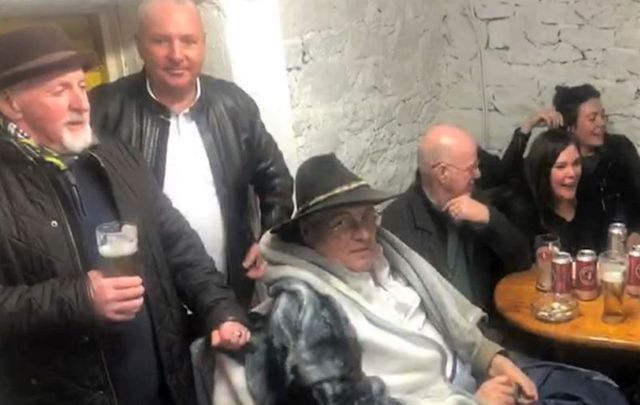 Terry Murphy got to enjoy his own "living wake" in Co Armagh after receiving a terminal cancer diagnosis. Justin McNulty, Facebook

Terry Murphy, who was recently diagnosed with a terminal form of cancer, had the rare opportunity to attend his own “living wake” at the Shebeen Pub in Lislea, Co Armagh on November 23.

Murphy, who ran the Shebeen pub for a number of years, was joined by scores of family and friends for a send-off in style that featured no shortage of Irish music and drink.

Justin McNulty, local MLA and SDLP Assembly Member for Newry and Armagh, told Joe.ie: "Terry is a character and there is widespread affection for him locally in Lislea, in South Armagh, in Newry, and in Australia where he lived for a time.

"There's affection for him wherever he has been in life. He was a roofer by trade and was always dressed with a suave and sartorial style.

"He was a tough, brave and strong man - not many were foolish enough to take on Terry Murphy!"

"He was associated for many years with the Corrinshego GAA club in Newry and was a big Armagh fan. He was probably best known for opening and running the Shebeen in Lislea for about 10 years.

Read More: How the Irish teach us to live, love, and die

"People traveled from far and wide to the Shebeen for the warm welcome, the homely atmosphere in a traditional Irish farmhouse setting and to meet the larger than life, friendly host Terry Murphy.

"The craic, the home-baked bread, the traditional music, the storytelling, the people you met from all over the world, made the Shebeen a unique and wonderful place. If Terry liked you, he might have even offered you a dram of poteen!

"You would also have regularly met Terry' s father -  'Joe Joe', may he rest in peace - and he was also a much-loved character who was famous for his favorite tipple, rum black."

Read More: Viral video shows why there’s nothing in the world like an Irish wake

The day after the epic celebrations, John Egan, a friend of Murphy’s, told the local newspaper Cross Examiner: “We went over last night from 8 until very, very late. It used to be a Shebeen years ago, and he wanted all his old friends and everyone he knew to come along. Every room was full of music and craic. The man himself was there and in good form.

“I would say myself, I have never heard or seen one of these before. But I would say it was one of the best parties I have ever been to. When you go to a wake, everyone can be in bad form, but it was completely different last night.

Terry’s aunt Tess Carr also told the newspaper: “The crowds there last night, with all of his best friends, the craic was ninety. I think it’s a great idea; there were story-tellers and all sorts of people at it – a fantastic night.”

Read More: Malachy McCourt in life's Departure Lounge at 85 and filled with fire

On Facebook, McNulty shared a video from Murphy's living wake and added a tribute to beloved the community man: “Without trying, Terry Murphy touches the lives of so many people. As one man said in the Shebeen last night, “Terry Murphy gives us all hope!

“We’re all on a timeline. Terry Murphy chooses and always has chosen to live his timeline different.”

TERRY MURPHY’S “WAKE” Without trying, Terry Murphy touches the lives of so many people. As one man said in the Shebeen last night, “Terry Murphy gives us all hope!” We’re all on a timeline. Terry Murphy chooses and always has chosen to live his timeline different.

Have you ever attended an Irish "living wake"? Would you like to attend your own wake if you could? Let us know in the comments!