'Death Need Not Be Fatal' author talks about the unforgettable lessons of every one of his eight and a half decades. 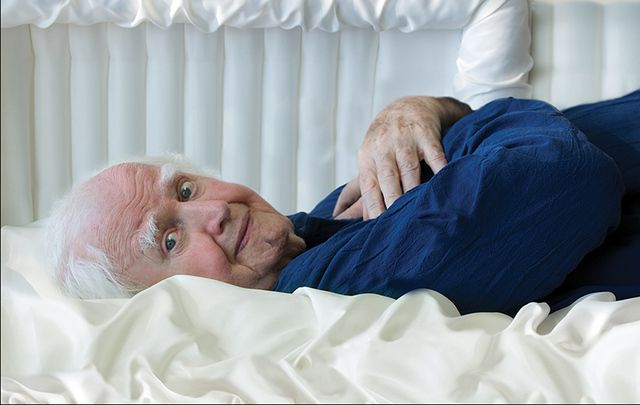 Promo shot of Malachy McCourt for his new book "Death Need Not Be Fatal".

At 85, Malachy McCourt swears to one and all he’s in the Departure Lounge of his life now, but there are few of his age filled with as much fire. Although he insists in his own words he will soon “expire, depart, ascend and vanish,” the truth is he has more to say now – hilariously and heart-rendingly – than ever. Cahir O'Doherty talks to him about his new book 'Death Need Not Be Fatal' about the unforgettable lessons of every one of his eight and a half decades.

Trust the Irish to find the funny side of death. “When you get to my age they say you’re in the Departure Lounge,” Malachy McCourt, 85, tells the Irish Voice.

“I was going to call the book Tales From the Departure Lounge, but the publisher told me that people would think it was all about airline travel. I replied, ‘You’re right, airline travel is very close to death these days.’”

Reading his new book, which he eventually titled Death Need Not Be Fatal, you can tell two things about him very quickly: he had terrific fun writing it, and it comes from a place of great personal feeling.

“As Mark Twain puts it, I was around millions of years before I was born, then life happens and I’m alive for few decades and then I die. So death is really far longer than life. It’s not an interruption of life.  It’s really the other way around,” McCourt continues.

That’s a heavy thought for noon on a Monday, but McCourt grew up in a Limerick slum where he and his brothers often went without heat and even food, so he’s uniquely comfortable with ideas and situations that might be very challenging to others.

Malachy laughing with his three brothers.

“I had a good time writing it,” he confesses. “What’s important to me now is this moment. I’m an alcoholic so the past to me is gone. It’s a canceled check. The future is a promissory note. Today is cash, you see?”

To his great astonishment, McCourt has come to a very peaceful place in his eight decades. “I’m atheist, thank God.  I have no fear of death. I will probably go to sleep like Alphie (his younger brother) did last year,” he says.

“He just lay down and he didn’t wake up. He was 10 years younger than me so I’m the last of the gang.”

McCourt has no fear of hell and no hope of heaven, he says. “I know that I certainly wouldn’t want to go to heaven. It sounds like the most boring f***ing place I can think of. Here are millions of people crowded to the right hand side of God, gazing at his right earlobe. If they ever look left they’ll see myself and Karl Marx sitting on his other side.”

For decades Malachy was the most well known McCourt until his brother Frank’s memoir Angela’s Ashes won the Pulitzer Prize and turned him into a public figure almost overnight.

But the one thing the pair had always shared was sour accusations directed at them that they had brought disgrace on their native city of Limerick. “People confuse being poor with poverty,” he explains. “But it’s really like the difference between having a cold and cancer. A cold is poor, cancer is poverty, and poverty is a disease.

“It’s very hard to describe the hopelessness of it. There’s not a scrap of coal or a bit of turf, you have nothing to eat in the house, you can’t even put the kettle on for a cup of tea. And there’s the mother with four small children trying to cope.”

Malachy recalls his mother Angela going to a dispensary to get 13 shillings and six pence. There, they would shout at her that they knew she was getting money from her husband in England in front of everyone, embarrassing her.

“Then she would line up at the Redemptorist Church for leftover food. The desperation is just… you’re cold and you’re hungry and then when you go to school they beat the s*** out of you for not being able to learn.”

McCourt left school when he was 13 and he didn’t go back.

“The thing that sustained me was the idea that I would get to America. I knew, being born here, that it was the one bright light in my life. I was a citizen. I’m an anchor baby!”

Naysayers should see the photograph he keeps of the door to his old Limerick home. “That’s the back door of our house on a Limerick lane,” he says pointing to it. “On the left is an outdoor tap and beside it is the one lavatory for everyone who lived on the lane.”

Above this grim picture it is another black and white photograph of the school he left at 13. “It’s now the Frank McCourt Museum, which is absolutely absurd. I mean Jaysus. A museum to a laner, the lowest form of life in Limerick. That’s what they called us. ‘You’re a dirty laner!’ That was the greatest insult they could throw at you.”

The hard lessons of poverty and oppression got under his skin, as they did Frank’s, and they took years to erase. “The pain, the f***ing pain of it. The class-consciousness and the embarrassment. All of that stuff.”

The Irish actor and fellow Limerick man Richard Harris famously called Frank’s memoir untrue, but how could he have known, Malachy asks? “He lived in the most upper class part of Limerick on the Ennis Road with the big house, with lawns on the front and gardens at the back and tennis. ‘Limerick wasn’t like that,’ he said. It wasn't for him.”

In Death Need Not Be Fatal, McCourt records a conversation he had with Harris that made him wonder if the actor was keeping secrets of his own. The pair had been careening around Europe in a private plane with a few pals. They visited Paris, Copenhagen, Hamburg, Stockholm and Rome, McCourt writes.

One morning Harris asked him if he had made a pass at him the previous night. McCourt was astonished. But something about the situation contained a latency that he never forgot.

“That was very strange, that comment. I kept that to myself for years. Then I thought well, f*** it, he accused Frank of all kinds of things. But I’m not accusing him. I don’t care what anyone’s orientation is.”

A longtime supporter of equality for LGBT Irish people, McCourt doesn't speculate about Harris. What he didn’t like was the actor’s bitter attacks on his brother.

“Then he played Cromwell, who killed 5,000 Limerick people! He made Cromwell a f***ing hero. But there are people like that and it saddens me because the inherent nature of our people is generosity and compassion. But it gets complicated by foreign influences, like the class system of the Brits, the foreign religion of Catholicism which is not at all Irish.”

Has McCourt thought about what his own send off would look like?

“I want a coming together, a community event because people like that,” he says. “I said to my wife Diana that I want to be cremated. There are some spots down by the Hudson River that I like. I won’t be here myself so it doesn’t matter what I want, it won’t concern me in the least where my ashes are. But if it will please the family then scatter them down there.”

The Hudson River is very important to him he says. “We went out on that river when we sailed away from America back to Ireland in 1933 and I sailed back up that river in 1952 when I returned. So that river is important.”

He concludes by mentioning one time when he picked up an elderly hitchhiker in Ireland who, when he was finally dropped off at his destination, said, “God bless you sir for your kindness, and good day to you – and may you have a happy death.”

Charmed by the memory, McCourt wants to wish that on other people too. “Now particularly I want to wish that on the current occupier of the White House, and the sooner the better, because he has to go and make heaven great again.”