November, as our ancestors knew is gloomy and dark, and as Ireland grieves for Gay Byrne, concerns grow for employment in midlands power stations as climate change grips and waters in the east become unclean. 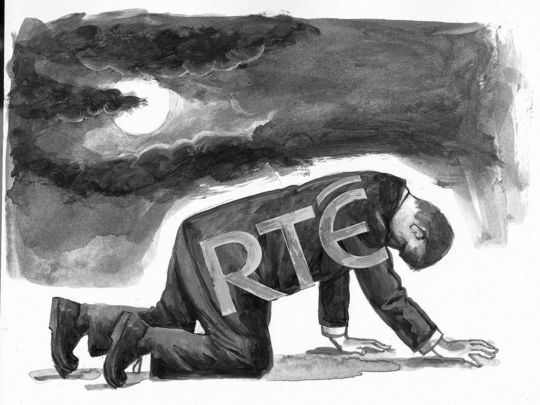 RTE, Ireland's national broadcaster, is on its knees. Caty Bartholomew

November, as our ancestors knew is gloomy and dark, and as Ireland grieves for Gay Byrne, concerns grow for employment in midlands power stations as climate change grips and waters in the east become unclean.

As we know in the marrow of our Celtic bones on both coasts of the Wild Atlantic Way, and on all the other dimensions of our diaspora, this is the ritual November month of our departed ancestors and it has always been gloomily dark and melancholy.  At home in Ireland, for certain, that has never been more powerfully and surreally true.

Events have been quite incredible right across all the scales of life and surviving its pressures right since the month began.  Sometimes, here in Killaloe on the shores of Lough Derg and the Shannon, I have the feeling that I’m struggling through a nightmare.

It’s a fervent hope that you readers, wherever you reside, are having an easier interlude than what is available hereabouts under a chilled winter moon being lashed and slashed by angry clouds with the serrated edges sharpened by a polluted atmosphere above our troubled globe.

That is heavy stuff, yes I know, but the yarns developing in Ireland this week, by the minute and hour, are almost beyond my aging ken.

The national radio station RTE, which fulfilled its public service broadcasting function splendidly for decades (and which, as he wittily recounted recently, had the power to make our publisher Niall O’Dowd famous for a day through the clout of Gay Byrne’s iconic Late Late Show on which he guested) is now in a totally different situation.

RTE is on its knees, as you read this, with its pockets so emptied by the media pressures of modernity, that it is seeking several hundred staff redundancies, closing several of its regional studios and the services they provide, freezing the salaries of staff across the board, sharply slashing the salaries of its top presenters trying to somehow occupy the shoes of Byrne (RIP) and struggling to survive into our tomorrows dominated by the likes of Netflix and Facebook et al.

According to their own statistics, actually, they could not really afford the cost of the coverage of the emotional Byrne funeral in Dublin last weekend.  Check out the details of their financial situation for yourselves if ye don’t believe this bemused old hack in Killaloe.  Ye will be shocked and amazed I think.

Concurrently, as a national row erupts over the manner in which the RTE survival plans were released, through the now infamous leaks system practiced globally across the new predatory media world which has to adopt such tactics itself to survive I suppose, other yarns were developing which I would not have believed could be true a few years ago but which are sadly true.

The most Celtic of these, I think, is the reality now becoming officially clear that the days of the turf-fired ESB power stations in the Midlands are numbered, in areas like Shannonbridge, because of climate concerns. Hundreds of jobs in the power stations themselves are directly affected, but also the very survival in the years ahead of the villages which grew up around the power stations.

The workers’ money and business down the decades has been critical to the economies and community life of those small towns down the years.  That is to end soon.  Even the most generous redundancy and re-training schemes will have little impact on the local communities once the turf smoke stops emerging from the chimneys of the stations.

And the energetic young generations, as always, will have to travel to Dublin and even beyond for the career opportunities they need once they fly away from the hearths of home along the banks of the Shannon and its tributaries.

Speaking of water -- and we’ve seen too much of it from the stormy skies this November -- it is another surprising dark truth that the gallons of holy water scattered over the sad coffin of Gay Byrne at the funeral ceremonies in Dublin’s Pro-Cathedral last week were probably originally drawn from the Dublin reaches of the Liffey and, accordingly, were polluted and toxic.

Treatment failures of water from the Liffey and other Dublin sources in recent months have resulted in all the residents of the Dublin area, and surrounding counties like Meath and Wicklow, being required by the authorities to purchase bottled water and to boil any tap water they need before using it for any purpose at all.

Something like 750,000 residents of the congested region are involved in an ongoing problem. God be with the days many of us remember when you went to the local spring well with your bucket and brought home the purest of yesterday’s water.

Reverting to the whimsical side of events, where I have always been more comfortable and relaxed, I now wish to inform you all that the MacConnell family in Killaloe is currently developing an apparently positive approach to this climactic problem besetting us all wherever we reside.  Shortly our roof will be bearing four or five solar panels which we are told will harvest the November and December light struggling to break through those dark skies above the Shannon.

However, given all the surreality surrounding this little island at the moment, I will not be at all surprised and shocked if a report emerges before the weekend stating beyond doubt that such solar panels can have an adverse impact on choppers and even larger aircraft flying above us on a constant basis.

We will deal with that issue when and if it emerges. I will keep ye fully briefed in the immediate future and hope that I am totally wrong again. Not for the first time either!

We’ll leave it there for now. I have to go to Tipperary, five minutes away across the bridge between the heritage towns we dwell in, to check out if it is any brighter and lighter over there. Stay safe, all of you, wherever you are, until we meet again.

Read more of Cormac MacConnell's tales from the west here