TV commentator and journalist is 100% Irish on her mother's side and studied there when she was younger. 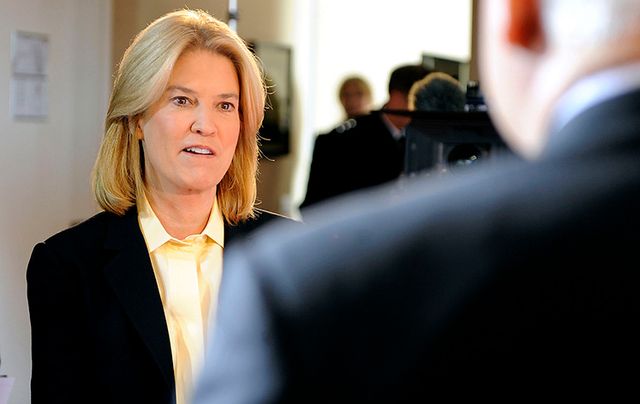 Greta Van Susteren has expressed an interest in being US Ambassador to Ireland. Wikimedia Commons

Cable show host Greta Van Susteren, canned by MSNBC last week, is looking for her next career opportunity, and she wouldn’t say no if she was nominated by President Trump as the new U.S. ambassador to Ireland.

Van Susteren, to her credit, hasn’t gone underground since MSNBC ditched her show. She’s been active on Twitter and answering lots of questions, one of which concerned her future career plans.

“Dream job -- Ambassador to Ireland? Dog walker? Radio?” she tweeted. “My husband says I should use my 59% Irish blood and find some good Irish luck :).”

Van Susteren is really into her Irish roots, as it turns out.  She studied in Ireland back in 1974 and has made many visits, including her most recent tour of the countryside in May with her lawyer husband John Coale.  She posted a ton of photos of on her Facebook page and also a 20-minute video.

Read More: Sean Spicer among favorites to be US Ambassador to Ireland

“I am in Ireland with John for a long weekend. I went to school here for a short time back in 1974 and my mother was 100% Irish, so Ireland is a place I wanted to show John,” she wrote.“John and I have been fortunate in that we have traveled many places...but usually to countries like Haiti, Burma, North Korea, Iraq, etc. so it is really fun to be with John in Ireland. I have been talking about Ireland to John for years but we have never traveled here together.”

I would love to be Amb to Ireland- my mother was 100 % Irish https://t.co/rXlxyC9tmC

Van Susteren’s had a friendly-ish relationship with President Trump, so who knows? Maybe he’ll tap her for the post that remains vacant.