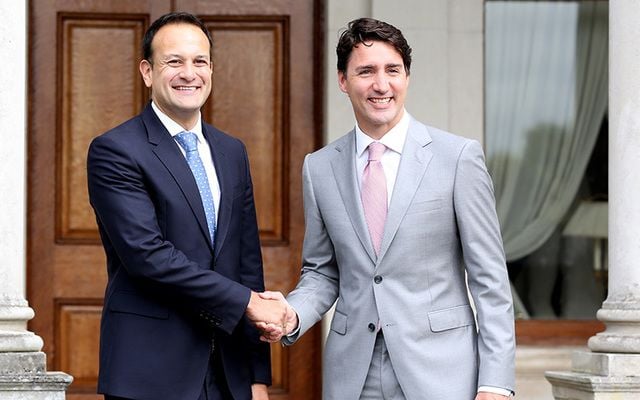 Canadian Prime Minister Justin Trudeau encouraged the Irish to be open and progressive instead of “turning inward” like the US and UK during his two-day trip to Ireland ahead of a G20 summit.

Trudeau took a hit at US President Donald Trump by stating that his Presidency and the impact of Brexit  presented "tremendous opportunities for countries like Canada and Ireland at a time where perhaps our significant allies and trading partners ... are turning inward or at least turning in a different direction."

Meeting with Irish Taoiseach (prime minister) Leo Varadkar in Dublin on Tuesday, in a meeting that was almost taken over by the media attention given to Varadkar’s Canadian-themed socks, Trudeau presented the idea that the two nations "make the pitch that Canada and Ireland are places that are exciting and open to the world in a positive, progressive way."

While Trudeau, 45, has long been regarded as the fresh face of western politics working to counteract the rise of Trump and Brexit, newcomer Varadkar, 38, as Ireland’s youngest ever Taoiseach, seemed eager to stake his claim as an equal, donning the flashy socks in tribute to the Canadian prime minister known for own interesting sock choices.

The pair also took to Dublin’s Phoenix Park for a run, leading to many photo opportunities that had the Irish media heralding a new bromance.

The Irish Taoiseach was less comfortable when it came to showing Trudeau a few skills in Ireland’s national sport hurling. While the Canadian prime minister showed he was reasonably adept with a sliotar and a hurl, following a display by Dublin player Ciarán Kilkenny, Varadkar shied away from his own contribution.

“I’m so not doing that,” Varadkar said after watching Trudeau’s impressive attempt, according to the New York Times, noting that the private school the Taoiseach attended would have forgone the Irish sport in favor of a more sedate field hockey.

Away from the chances to show off their sporting prowess, the leaders reaffirmed their support for the Comprehensive Economic and Trade Agreement, a free-trade pact between Canada and the European Union, ratified individually by each of the 28 states of the EU.

While the agreement has received pushback from environmentalists, trade unionists, and farmers, among others, both leaders committed to its continuation, stating that they believed it to be of benefit to both countries.

“We’ve much more to gain from free trade than to lose,” said Varadkar.

“All of us were looking forward to the good jobs and the great opportunities it will afford both our countries,” stated Trudeau.

“We all want to leave to our children and grandchildren a better world than the one we inherited from our parents and we are willing to work hard to build a cleaner more prosperous world.”

At a dinner hosted by Varadkar in Dublin Castle on Tuesday night, Trudeau also highlighted the strong history of Irish emigration to Canada, having discovered his own Irish roots in Bandon, Co. Cork, earlier that day.

The Taoiseach spoke at the dinner of 150 guests of the emigration of Irish to Canada during the 1840s famine, in particular, stating how we must learn from our own past in helping others.

“Today of course millions of people around the world face the threat of famine and must leave their countries to seek refuge elsewhere,” he said.

“People flee famine in South Sudan while people in Yemen, Somalia and Syria also live in the shadow of hunger.

“I am glad that at a time when other countries are taking back control of their borders, and turning inward, both our countries have decided to accept large numbers of refugees from Syria, 25,000 in yours and 4,000 in ours.”

Trudeau will today travel to Scotland Wednesday where he will meet with British Queen Elizabeth II before attending a summit of G-20 leaders in Hamburg, Germany on Friday and Saturday.