For a Yeats fan like Justin Trudeau, a trip to see the landscape that inspired his poetry was always going to be inspirational. 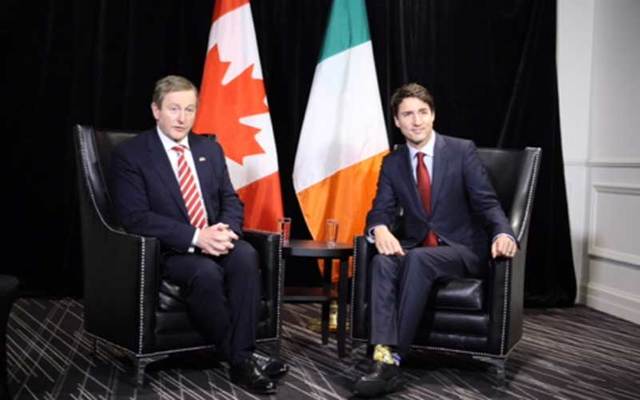 Canada’s Prime Minister has set tongues wagging all over the world again with his "Star Wars" sox appeal.

As The NY Times noted, Trudeau stood out for "Specifically, his socks. Specifically, his mismatched “Star Wars” socks, one in blue and gray with R2D2 and the other in gold and black depicting C3PO. They were impossible to miss set against his dark suit, white shirt, and red tie."

Trudeau posted a picture of the socks on his Twitter account writing “These are the socks you are looking for.” another “Star Wars” reference, of course. As of Friday night, the post had been liked more than 26,000 times.

Oh and Trudeau also spoke of experiencing Ireland’s “extraordinary beauty” on a trip to Sligo as a teenager in an interview with Irish television.

Trudeau visited the country as a teenager when his father, Pierre, was serving as Canadian Prime Minister. Growing up he had always been an avid Yeats fan and said his “best memory” of the trip being one "very misty, cloudy, slightly drizzly morning" when they visited the Lake Isle of Innisfree, describing it as “just something that burned into my mind of just extraordinary beauty".

Trudeau was hosting Taoiseach (Prime Minister) Enda Kenny for a summit on Irish-Canadian relations and EU trade. Despite the fact that the Canadian Prime Minister’s Star Wars socks stole the show, he also spoke about the long contribution of Irish immigrants to Canada; the Irish, he said, had built his “home city” of Montreal and many French-speaking Canadians had Irish origin names, such as Ryan and Murray, so interwoven into the fabric of the province had they become.

May the force always be with him @JustinTrudeau in #starwars socks pic.twitter.com/crjD3zddAy

He added that "understanding that immigration is a source of strength" means that Canada will always “anchor on” pro-migration policies.

When questioned by RTÉ about the asylum seekers traveling from the US to claim asylum in Canada Trudeau said he welcomed,  "[people] who are desperate to build a better life for themselves and their family who want to work hard, who want to contribute, who want to be part of our country."

The force — and sock game — is strong with @JustinTrudeau.#MayTheFourthBeWithYou https://t.co/nfrTq27WbK

If that sounded like a broadside against President Trump he also said there "lots of challenges in any relationship between two close neighbors" like Canada and America but that so far there hadn’t between “any awkward conversations” between the two.

"We may not always agree on the best way to go ahead but looking for ways to meaningfully improve the economic well-being of our citizens in something we agree on and we also recognize that countries that are so inter-connected can benefit each other".

But in the week that the White House warned it could rip up the North American Free Trade Agreement Trudeau was keen to talk up the benefits of free trade, insisting Canada’s new agreement with the EU would benefit workers.

Taoiseach Enda Kenny refused to answer questions over his leadership during a press conference with Canadian PM Justin Trudeau pic.twitter.com/BzgLnSf7Xy

"[The opportunity for] Canadian consumers to access goods and services from the EU and the opportunity for Canadian producers to sell the great things that we make and do here in Canada in the EU is going to make things better for everyone".

And he said he wasn’t worried that Britain’s decision to leave the EU could encourage people from his home province of Quebec to consider leaving Canada.

"There are always people who feel passionately wrapped up in their identity and feel slightly more Quebecer than they do Canadian,” he mused, “but for the most part and particularly among young people there's a recognition that we're part of a larger world, and giving up on the Pacific Ocean, giving up on the great diversity in Canada and all the resources we have…. doesn't make as much sense as perhaps it once did".