“Gay” back then meant something different entirely to nowadays. "New Ireland" has changed dramatically and it's changed for the better too 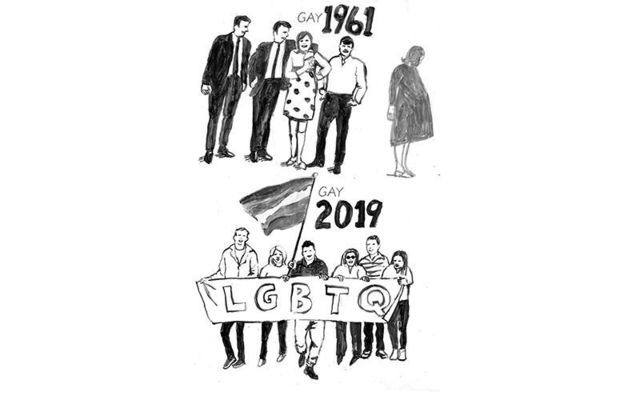 “Gay” back then meant something different entirely to nowadays. "New Ireland" has changed dramatically and it's changed for the better too

My occasionally sharp enough tongue is nowhere close to my cheek as I claim to all of you out there on both coasts of the Wild Atlantic Way this June that it is a disadvantage in the Emerald Isle at present, across all the lifescales by which we seek success and recognition and prestige, to be a straight male person in gender terms, to never have sniffed or snorted cocaine, and not possess the ability to use all branches of the media as dramatic confessional boxes to enhance our images.

With huge regret, this old hack must admit that he has never snorted cocaine or anything of that nature, that he still uses the secret old confessional boxes in country chapels occasionally and that he is not gay in the modern sense of the word.

Furthermore, in this surreal New Ireland, he has totally lost track of all the many emerging gender terms such as LGBT whatever that means. Are any of ye more senior readers in the same situation?

There are naysayers out there as always who will state that they drank pints of porter with me at the Gay Bachelors’ Festival below in Ballybunion in Kerry 40 years ago. That is totally accurate but the festival down in Ballybunion back in those days was a different animal altogether as they well remember.

The young bachelors were only interested in chasing women around the town and county because “gay” back then meant something different entirely to nowadays. The folk in Kerry, then and now, were always miles ahead of the rest when it came to generating tourist attractions and plenty of craic.

Times have dramatically changed nowadays. They have changed for the better too, right from the top down.

We have a proudly and openly gay taoiseach, liberal legislation which respects the rights and freedoms of all residents of all those gender dimensions I’ve frankly lost track of, same-sex marriages and partnerships, divorce, and compassionate abortion regulations, under compassionate grounds ye have read about widely.

In the old days of the Gay Festival, for example, the poor girl who was left with a pregnancy after the ball was over and the father gone home, had to flee to England to avoid the shame and scandal which we all visited on her decent family. And if she disappeared quietly into a Mother and Baby home here we now know that she was usually pressured into signing adoption papers for little boys and girls who were effectively sold off by the authorities to overseas adopting parents.

Those shocking stories of our national shame are emerging now.  But it is too little too late for many involved, especially the mothers involved. We’ll leave it there with a prayer.

On the personal-professional level where we began, I have now quietly accepted the reality I would be much more successful as a print journalist, much better paid and respected, if I’d had been blessed with the foresight to have traded as a potentially gay man in my youth and prime, if I’d snorted a few lines of cocaine at upmarket parties where persons of all genders were sowing their wild oats right, left and center, were readying for dramatic media confessions about that (after the legal prosecution period had long expired) to glamorize their current careers across all the arts and crafts that lead to modern stardom.

Sadly I missed that bus and cannot catch it now. So I watch the TV screens jealously and with more than a little shock and awe.  Like everything else in life, it will pass sooner or later.

In the meantime, I send warmly sincere best wishes to all of you, whatever your gender definition, and I’m determined to enjoy fully this new fangled summer. I will have a gay time for sure.

That, of course, with my wife and family, will be according to the Ballybunion traditions and dimensions of gaiety.  You can’t really teach an old dog new tricks.