Fishermen in Dingle, Co Kerry protested the docking of a Spanish vessel ship this week amid fears of COVID-19 transmission. 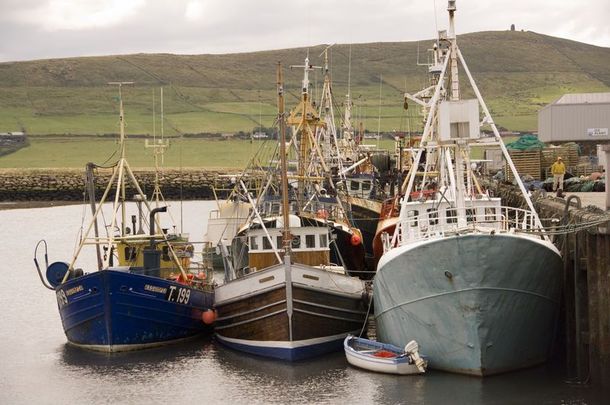 Local fishermen in Dingle, Co Kerry staged a blockade against an incoming vessel from Spain. RollingNews.ie

Fishermen in Dingle, Co Kerry protested the docking of a Spanish vessel ship this week amid fears of COVID-19 transmission.

Up to 40 local fishermen in Dingle, Co Kerry held a protest in the early hours of Monday morning in order to block a Spanish trawler from landing fish.

Read More: Ireland could be struck with nine waves of COVID-19, says scientist

The local community mounted a blockade by sitting or lying on the ground at the pier, preventing an agent from driving across the pier in a truck that would have loaded the fish caught on the trawler.

The fishermen had announced their intentions to block the arrival, and gardaí were present when the Spanish-owned trawler arrived at the pier at 4:30 a.m.

Gardaí attempted to negotiate with the protesters in order to let the truck through but were unsuccessful, and the trawler departed from Dingle Harbour at 5:30 am without having transferred the caught fish to the truck.

RTE reported that the catch was instead landed in Castletownbere in Co Cork, with video journalist Seán Mac an tSíthigh capturing the scene in the early hours.

Protesters have prevented a Spanish trawler from landing fish in Dingle, where local fishermen have raised concerns about the possible transmission of Covid-19 by foreign vessels and trucks | Read more: https://t.co/GifWDLfkfU pic.twitter.com/krmOutagyQ

The agent for trawler and truck, Spanish company Ricardo Ferriera, told RTE that the protest was "disappointing" as the crew were adhering to the guidelines set by the Irish government to allow their fishing to continue in Irish waters.

"We have completed all the relevant HSE Covid-19 paperwork and the designated zones were ready on the pier. It is four weeks since this crew left Spain to go fishing," he said.

"There is absolutely no risk of virus."

A spokesperson for the protest, local fisherman Mickey Hennessey, said they had "achieved our objective, which is to protect our town from coronavirus.”

Saying the fishermen had no problems with foreign ships fishing in Dingle waters in normal times, he stated, “We just don't want them coming in here now while this crisis is happening."

"This isn't a fishing issue, this is a health issue.”

He confirmed the protests would continue for the duration of the crisis.

Read More: Is this the most beautiful walk in Ireland?