Oscar-winning documentary maker Alex Gibney on the 1994 murder of six men in County Down – an explosive story which needed to be told. 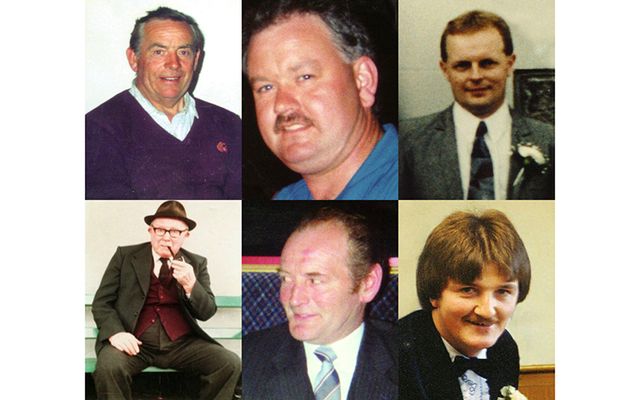 The six victims of the Loughinisland massacre, in 1994.

In 1994, six men were killed and five wounded while watching a World Cup soccer match in tiny pub in Loughinisland, Co. Down. The controversial police investigation that followed never led to a single conviction. Celebrated filmmaker Alex Gibney has reopened the infamous case to investigate why no one has ever been brought to justice. Cahir O’Doherty talks to the Academy Award-winning director about his explosive new film, "No Stone Unturned."

Director Alex Gibney’s explosive new film about the Loughinisland massacre was slated to have its world premiere at the Tribeca Film Festival on April 23 of this year, but it didn't happen. "No Stone Unturned" was withdrawn from screening due to unspecified “legal issues.”

Viewing his hard-hitting new film for the first-time last week, I can see why all parties took every precaution to shield themselves. Gibney has produced a deeply unsettling account of just how dirty the war in the North became, showing the shocking extent of the collusion and cover-up between loyalist paramilitaries and the police and security services.

The attack on the Heights Bar in Loughinisland was one of the most infamous of The Troubles. On the night of June 18, 1994 Ireland was playing (and beating) Italy in a World Cup match in the Meadowlands in New Jersey. A group of local men had gathered on the night to watch the match and cheer on their home country. What they didn’t know was that the pub had been targeted by the Ulster Volunteer Force (UVF) because it was known to be frequented by Catholics.

At 10:10 p.m., two UVF members wearing dark boiler suits and balaclavas calmly walked into the bar and immediately opened fire on the crowd with high-powered assault rifles, spraying the room with more than 60 bullets. Six men were killed outright and five other people were wounded.

The carnage in the Heights pub right after the massacre.

Witnesses said the gunmen sped to their getaway where one was overheard to be "laughing." Another witness described the “bodies … lying piled on top of each other on the floor,” and others spoke of the terrible smell.

"No Stone Unturned," which investigates how and why this massacre happened, will have its debut at the New York Film Festival on September 30.  Our sister publication the Irish Voice attended a special screening last week and spoke to Gibney in advance of its release.

“It hasn't been shown anywhere yet,” says Gibney about the BBC co-production. “It will premiere at the New York Film Festival and also at the London Film Festival and that'll be the first time it'll be seen in the U.K. Then we'll have the theatrical release in the U.K. and Ireland and here.”

What stopped it from being shown at Tribeca in April?  “What I can divulge is that the laws in the U.K. and the U.S.A. are pretty different in terms of naming individuals. There was some concern that by naming the people we do in the film there might be a risk to their lives,” he said.

“That was the issue from which there was an argument. So, with a deadline looming, we elected to postpone until we could resolve the argument.”

Have they tweaked anything in the final edit? “Not really. Ultimately the argument was won in terms of revealing names. I was having a hard time understanding why anyone would have so much concern for the likely suspects, as opposed to the families of the victims,” Gibney said.

What interested Gibney was not only the notorious case and the crime, but the idea of how do you reckon with the past, particularly in a place like Northern Ireland where the past is all around. What is the balance you need to strike?

“It seemed crazy to me if you had good evidence that you couldn't at least raise the issue and name people as likely suspects in the case as a way of prodding officials to look into it. And also, by the way, to warn people,” he says.

“If I was living in Florida in the late 1970s I would have liked to know what Ted Bundy looked like and that he was living there.”

Don't people tell him Gibney he’s kicking over a hornet’s nest? “Everyone had to wrestle those issues and I did too. But after 23 years it seemed unfair that the suspects – and indeed some of the police officers – should be shielded rather than held to account.

“We went out to the people, particularly the likely suspects, and we said, ‘We're going to name you.’ We told them in advance. There was one person we couldn't find, but the others were told in advance that we're going to name you publicly. If you have any issue with that or if you'd like to talk to us we're here. We had no response. Crickets.”

The peace and reconciliation process with regards to the Troubles is still in its infancy, Gibney admits.

“Even in regard to the Ombudsman Michael Maguire's report (into the massacre) the police are challenging it. There's tremendous pushback. There's a huge battle still being fought over the past and about whether people should be held to account.”

“But I think that what's going on in the U.K. is a cautionary tale for us here too. Here we have the First Amendment, we have a lot more protections,” he says.

“In the U.K. they are subject to the Official Secrets Act.  It's much more difficult there to get an account even well after the fact in terms of what happened.”

So how do you go forward if the government continues to bury all of this information, "No Stone Unturned" asks? “If you tab all the things the police lost or destroyed when it came to evidence in this one case and then you multiply it, it's staggering and scary. It makes me glad and proud that we have a system where we can at least get a lot of that information, and there are penalties for destroying that stuff.”

Is Gibney ready for the howls of protest from the British government and the conservative press?

“I suspect the reaction will be severe,” he shrugs. “I expect a lot of people in the British government will be upset. Fine, you know. I worked with an extraordinary team out of Northern Ireland in terms of digging out the story.

“Being an American, I was able to look at it purely as a crime story on one hand and to see it in a global context on the other. How can we all go forward if there are no ways to hold the government to account?

Many police officers did an extraordinary job under terrible circumstances in Northern Ireland, he says, and there are good reasons to maintain informer and intelligence to see what’s going on. “Trying to keep the peace now is tricky. They tell me you don't want to bring up all these old wounds that will destabilize things and drag us all back.”

But "No Stone Unturned" keeps coming back to the haunted faces of the affected families. In particular, the surviving wives and daughters are an unforgettable blend of cynicism and steely determination to get to the truth.

“What do we owe them?” asks Gibney, explaining why he decided to make the film. “Are they just collateral damage? I suspect many people in the British government will be upset by this film. I hope they are.

“I think people in the U.K. should be upset about the Official Secrets Act. I find it an appalling act to be honest with you.”

It was well known to the local police that there had been a dangerous loyalist paramilitary gang working out of the area around Loughinisland, the film asserts. Indeed, the man who is suspected of killing the six men in the pub that night is pictured and named in the film. He still works in the local area.

These days he offers extermination services to the nearby community. He cleans out rats and bugs. “When I heard that I was staggered by it,” Gibney says.

Here is a recent ESPN aired documentary on the massacre: