A twin-pronged attack on Britain‘s Brexit plans has been carried out by the leaders of the Republic’s two main opposition parties. 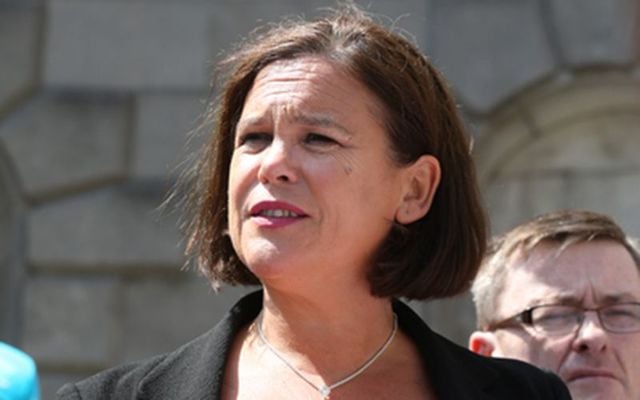 A twin-pronged attack on Britain‘s Brexit plans has been carried out by the leaders of the Republic’s two main opposition parties.

Sinn Féin leader Mary Lou McDonald has urged the EU to convene a special summit on the Irish border impasse, and Fianna Fáil leader Mícheál Martin said the Brexit process was in an undeniable crisis.

McDonald has also demanded that the EU call time on the British government stalling on Brexit.

She urged Michel Barnier to push for the additional meeting of European leaders as she met the EU’s chief Brexit negotiator in Brussels on Monday.

After her talks with Barnier, she said she had received assurances that the EU was standing firm on its insistence that a so-called Irish border “backstop” agreed between Brussels and London must form part of the final withdrawal treaty as Britain exits the EU.

McDonald was clearly not impressed with British Prime Minister Theresa May’s first visit to the border at Belleek, Co Fermanagh, last week and her speech the following day in Belfast. The visit gave no indication that the British government would abide by the “backstop” agreement last December which would ensure a free-flowing border regardless of the terms of the U.K.’s exit from the EU.

McDonald, who was accompanied in Brussels by Sinn Féin vice president Michelle O’Neill, said an extra EU meeting is required in September to try to forge a resolution ahead of October’s crunch summit – the effective deadline to secure a Brexit deal.

Read more: Tánaiste asserts that United Ireland poll amid Brexit is too hasty

Speaking as the British Prime Minister visited Fermanagh today, Sinn Féin deputy leader Michelle O’Neill accused Theresa May of attempting to renege on the commitments she made in December on Brexit. pic.twitter.com/pJQ7Hskba0

She said, “Last week’s visit by Theresa May to Belfast has raised very serious concerns over the British government’s approach to Brexit.

“In December we were told that a ‘backstop’ was a cast-iron guarantee, that the Good Friday Agreement would be protected in word and spirit, and that there would be no diminution of rights for Irish and EU citizens in the North.

“The British government is seeking to row back on these commitments and to bin the December agreement. Theresa May is placing her personal self-interest to stay in Downing Street ahead of the needs of Ireland, north and south.”

Meanwhile, Martin, speaking on Monday at the MacGill Summer School in Glenties, Co. Donegal, said the moment of truth on Brexit and Northern Ireland has been reached.

“The choices facing us are starker than ever, the room for maneuver is becoming narrower by the day. There is no more time for delay,” he said.

Martin said the “best opportunity” for Northern Ireland was for it to become a special economic zone in which it would benefit from the “best of both worlds,” with access to both the U.K. and EU markets.

Are Fianna Fáil and Sinn Féin correct? What is your take on the Brexit border issue? Let us know your thoughts in the comments section, below.