With total COVID-19 deaths now over 100,000 in America and no let-up in sight, it hardly seems possible but Trump can never be counted out. 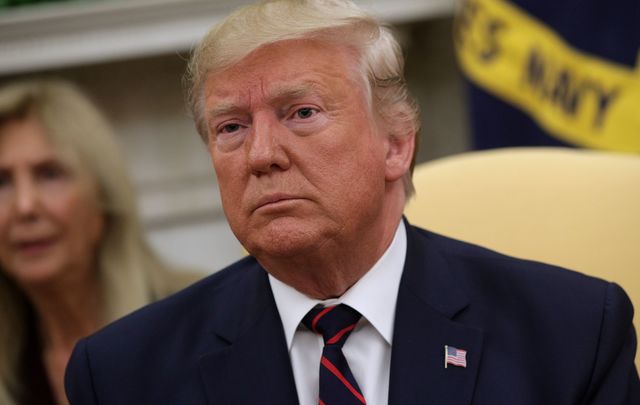 Donald J Trump will have to be Usain Bolt to escape blame and election defeat over his disastrous handling of the coronavirus tragedy.

America has lost the equivalent population of many small cities since the onset of COVID-19.  Many more will unfortunately lose their lives too.

Trump is not responsible for all the death, but he needs to know the cardinal lesson that the sign on President Harry Truman’s desk applies to him too: “The Buck Stops Here.”

In the end what is costing Trump dearly is what an examining psychiatrist would likely call a humongous case of attention deficit order, among many other ills.

He simply cannot keep focused on the task or crisis in front of him.  Despairing intelligence briefers told The Washington Post last weekend that they have cut briefings on major issues to a page or two -- the more visual the report is with graphs and photographs, the better Trump will pay attention.  We wonder if letting let him play with a Lego set as he is briefed might help.

This is the president of the United States?

Little wonder, due to this mental deficit, he failed to anticipate the gathering storm surrounding the new and dangerous virus from the East which was quickly spreading.  He lacked the intellectual capacity to comprehend the potential of the mass outbreak. His horizon stretches only to the next Fox & Friends broadcast.

Trump is playing with being president the way British leader Boris Johnson sees himself as a pretend Winston Churchill in his disastrous handling of the COVID-19 crisis.

Read more: Irish receiving Trump’s $1,200 checks in error could be banned from USA

Any president in his right mind would have called in his medical experts (as the government in Ireland did) and immediately hand over the reins as to how to deal with it.

Trump didn’t see it that way, calling for the equivalent of a plumber -- his merry bunch of yes men in the House, Senate, and media to spin fancy stories.

And what stories they spun -- a miracle drug, a vaccine breakthrough, a continuous effort to lie, obfuscate and disseminate false information. His followers swallowed it all.

It appears all of Trump’s backers are ready like Polonius to believe and broadcast every jumble and flood of misinformation coming from the president, instead of doing what a wise advisor would and try to get the ADD-addled Trump to focus on the facts.

After his lame brain projections that the COVID-19 storm would peter out were inevitably exposed, he began deflecting attention everywhere else, (Joe Biden and Barack Obama are criminals, Nancy Pelosi has false teeth, Stacey Abrams is overweight, a former employee of Joe Scarborough was likely murdered, etc.)

These kind of scare tactics worked the first time around when Trump finally pulled Hillary Clinton down into the mud pit. But it is four years on.

The plague has come and it bears the name of one Donald J. Trump as its victim not in the corporeal sense but as a political casualty.