Our nation's testing is such that we cannot get a clear picture regarding new infections or recoveries. How is this happening in the richest nation on earth? 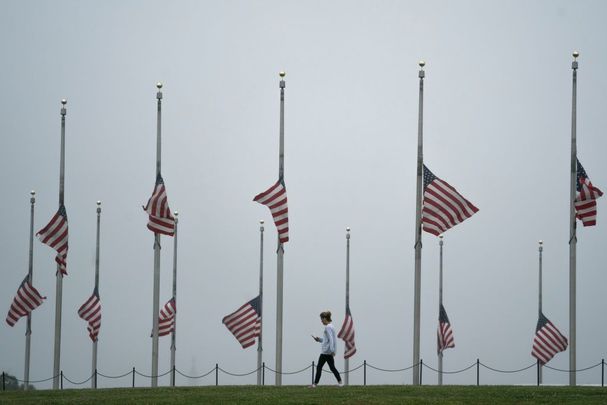 American flags fly at half-staff near the Washington Monument on the National Mall, May 22, 2020 in Washington, DC. Getty Images

100,000 Americans lie dead this Memorial Day. The United States has the highest transmission rate of coronavirus in the world, with the most catastrophic numbers of the dead.

His impulse was to visit the links, to hop in a Trump resort golf cart (thanks US taxpayers) and do something fun for himself, something that he actually enjoys for a change.

Besides he does not know, or care, about the people that have died. They were no one he knew, obviously. The people that he knows and cares for are a very short list.

I personally knew and cared for some of the coronavirus dead, and so that explains why instead of thinking about hitting the links or the beach this weekend, I stayed at home and experienced something different from the president -- immobilizing grief.

When they say America is a divided nation, this is what they mean. Even grief is for the little people now. He can not see it; he certainly does not feel it.

It's about to be June. Most of us have been hiding from this pandemic since mid-March. It may be the reason why you are alive to read this; it's certainly the reason that the number of deaths here, although already the worst in the world, are not even worse than they are now.

There are photographs hitting the internet this weekend of crowded beach communities, with thousands of oblivious Americans out enjoying the sun, completely unmasked and unprotected and eschewing any social distancing, reminding me that the phrase “low information voter” has always been an Ivy League euphemism for stupid.

Sixty-two million Americans voted for a man who thinks COVID-19 can be cured with household bleach or ultraviolet light, after all. You get what you vote for.

It's about to be Memorial Day. We have known that this coronavirus pandemic and COVID-19 was coming since January (when, incidentally, Moderna reportedly began their profitable race for a vaccine).

So instead of talking about beach-side-barbecues that can't happen or unmasked get-togethers that shouldn't happen, I want to ask why coronavirus testing in America is such a disorganized disgrace?

Lacking any coordination at the national level, the current national testing drive is not accurate enough to use never mind make a decision from, for crucial questions like when it's safe to travel, take a subway, eat out, go to the beach, or return to work.

There is no sense of national leadership if your guess is as good as Jared Kushner's, and is probably actually better, since it's being made pragmatically, with reference to the facts and not politics. 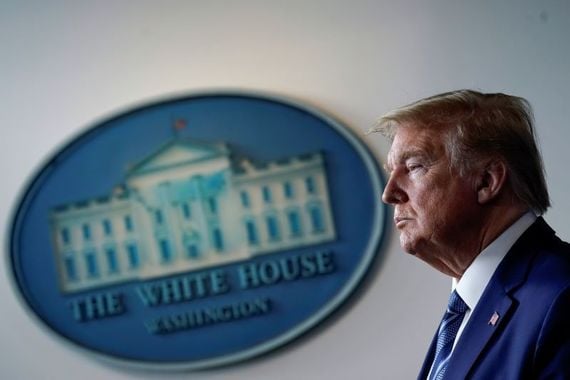 The national response is such a horrifying scandal now because, according to the press, the Center for Disease Control (CDC) is currently conflating viral and antibody coronavirus tests, two very different types of  test, which is in turn compromising the data being presented to governors before they reopen their economies.

Blending the data like this means we cannot get a clear picture regarding new infections or recoveries. How is this happening in the richest nation on earth?

How can it be that our president has been manifestly unable to address the most deadly pandemic we have ever faced head on, or the 40 million unemployed as a result of it, with a clear vision for the country and a national action plan, without scoffing at “blue state bailouts” or requesting “quid pro quos” for his help?

Last week infectious disease experts released a new report urgently called on the US Department of Health and Human Services to appoint a panel to oversee and organize national testing. Again, it's almost June. It's past time.

“The panel should include representatives from public health, clinical laboratory, and medicine; the laboratory testing research and development, marketing, and product support industries; ethicists; legal scholars; and elected officials,” the report said.

Last week New York State began investigating 157 cases of the COVID-related illness affecting children. There is no category of citizen the virus does not target. So how to explain the lack of urgency and alarm being felt by the president?

With 40,000,000 people out of work, over 1,500,000 confirmed cases of #COVID19 and nearly 100,000 deaths in the US, Trump is spending the day golfing. Hey #MAGA crowd, is our county great yet? #TrumpGolfsWhilePeopleDie #TrumpDeathToll100K #TrumpDepression https://t.co/gVgOb2ZMDV

Like Nero fiddling whilst Rome burned, Trump went golfing this weekend whilst a pandemic fills the city morgues with the American dead. Because they are no one he knew. Because grief is for the little people. Tee up and get over it.

When people show you who they are believe them, wrote Maya Angelou. This is who Donald Trump  is, and who he has always been, and this Memorial Day, and from now on, we will just have to look elsewhere for all the answers we all need.

Read More: After four years of Trump, are you better off than you were before