The Democratic Unionist Party held up the agreement between the Irish government and the British prior to the historic acceptance of a soft border by both countries. 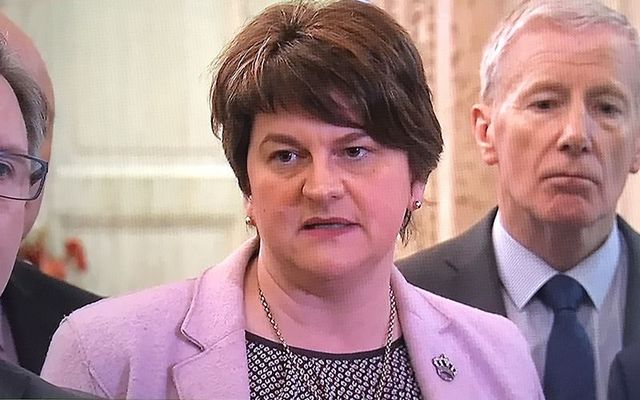 Arlene Foster, leader of the DUP, saying no live from Stormont to the first Brexit deal on December 4. RollingNews

The biggest loser in the Brexit fallout was the Democratic Unionist Party (DUP), which had held up agreement between the Irish government and the British prior to the historic acceptance of a soft border by both countries last Friday.

Prior to the agreement, the DUP threatened to bring down the British government as it props up the current Tory Prime Minister Theresa May.

But by threatening May, the DUP damaged its own best chance of influencing future British policy on Brexit.

No prime minister likes to look weak, and no prime minister takes kindly to being summoned from a meeting with other European leaders and told that she cannot proceed with an agreed Brexit plan.

But that’s what happened earlier last week when DUP leader Arlene Foster called May in Brussels and told her that the DUP wouldn’t support her Brexit deal.  May had to agree to the DUP demand that she not go ahead with the deal, but it came at a huge cost for unionism.

After defeat at home, Britain's May urges EU leaders to move on with Brexit https://t.co/kuTmOaImkk pic.twitter.com/6TruBbbnmR

No British prime minister has appeared weaker and less in charge of her government than May. It was the DUP which revealed that the emperor had no clothes.

It would have been a very interesting exercise for May to try and defy the DUP and allow the party to do its worst, an attempt to bring down the British government.

But would the DUP have carried out its threat? If May went out of power, and a subsequent election held, she would have been replaced by former IRA supporter Jeremy Corbyn who would certainly have no truck with unionism.

But the fact that May agreed to carry out the orders of the DUP has also left its mark.

Within a few days a new Brexit border agreement, essentially indistinguishable from the old one, was put together, this time with the DUP on board.

It was a remarkable moment, and an example of how the power of unionism continues to wane as political events move forward.

The DUP position made no sense. They were not in favor of a hard border, yet they acted like they were. The difference between their position and the British government’s was actually quite minor.

Theresa May and Arlene Foster outside 10 Downing Street.

The story of Brexit continues, though, the most complete political disaster in British history, right up there with Chamberlain’s appeasement of Hitler.

Nothing good will come of Brexit. The Tory Party has been torn apart by it, the British public is divided, and there seems no end of political intrigue and backroom deals as the British struggle to extricate themselves from the European Union.

The DUP had a singular opportunity to be of assistance to May in her hour of need.  Instead they decided to confront her and embarrass her, and in the process likely lost her support and backing in the future.

Brexit has brought a united Ireland closer.  The issue is now on the bargaining table.

Some superb negotiating by the Irish government led to the acceptance by the British that a border is not practical.  One can see in the near future a similar judgment when demographics put nationalists in the majority on the issue of the partition of Ireland.

The amazing thing is that Brexit was not necessary. Former British PM David Cameron called the vote in an attempt to end right wing opposition, and in the process lost his leadership.

But the British have lost something else. The outward looking, cool Britannia of Tony Blair no longer exists.

Now there is only a continuing argument as to how they can march backwards into the past and leave the European Union.

A casualty of all this is the DUP, which will become evident as the years pass.