Remembering Ann Lovett who died ashamed and alone in childbirth under a Catholic grotto. Her death changed Ireland forever. 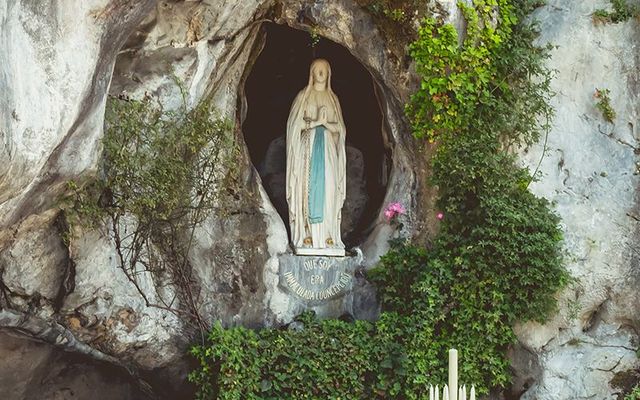 A Catholic grotto to Virgin Mary, similar to the one Ann Lovett died beneath alone and shamed in childbirth. iStock

The name Ann Lovett will reverberate through Irish history as her death marked a huge turning point in Irish life.

Fifteen-year-old Ann Lovett would turn 54 this year if she had not died on Thursday, February 2, 1984.  Rosita Boland of The Irish Times wrote a riveting account of what happened, an event that changed Ireland forever that long ago rainy day. Locals will still not discuss it.

Ann Lovett was living in Granard, Co. Longford, an unremarkable Irish provincial town about 70 miles from Dublin.  The family was originally from Cavan. Her father was a local publican, her mother a devoted Mass-goer.

► VIDEO: The story of Ann Lovett, the schoolgirl who died aged 15 after giving birth at a grotto in Granard, Co Longford in 1984 https://t.co/pcMxEr5y9d pic.twitter.com/jtAOL6bkwl

There were nine children.  Ann was remembered by a schoolmate, Nuala Ledwith, as “pixie faced” and pretty, “a strong girl, a kick-ass kind of girl.

On Tuesday, February 4, 1984, with rain lashing down, Ann left home to go to school. She also took with her a scissors.

She skipped school and instead called to the home of her best friend Mary Maguire.

Ann wanted Mary to come with her but Mary was babysitting. The rain continued to pour.

Ann walked on her own towards the nearby church and the grotto.  As Boland writes, “Ann took the scissors out of her schoolbag, leaving the bag near the entrance.  Sometime between 12:45 p.m. and 4 p.m., she lay down beside the workhouse chapel railings, removed her underwear and gave birth in the rain.”

She put her coat around the newborn after cutting the umbilical cord. Then, too weak to stand, she lay down again.

Sometime later three boys returning home from school heard moaning from the grotto and discovered Ann lying on her back and a dead baby beside her. There was a lot of blood.

They ran and told the first person they saw, Tony Kelly, who rushed to the grotto. He remembers, “I asked the big lad, ‘Who is she?’ and he said, ‘It’s Ann Lovett.’

“So I held her hand to see was she alright, like, and she was very cold. I put her hand down again. So I went in for the priest and I rang at the door.”

A neighbor, Eugene Gallagher, alerted by the boys called the doctor who ran to the grotto.

“I had a little hope for her, but not much. She was very critically ill,” the doctor said later.

Ann died in hospital shortly after the ambulance brought her there. The town immediately closed ranks with no one admitting they knew she was pregnant.

34 years ago today, Ann Lovett died after giving birth at a grotto in Granard. Ann’s death changed an Ireland which is still trying to escape the long shadow of the 1980s, writes @Donal_OKeeffe. https://t.co/dwFATxiG0L via @TheAvondhu pic.twitter.com/51cEuy2Num

Jim Gray, a local reporter, had tried hard to get people to talk. “I knocked on doors and people said they didn’t know the Lovetts at all. There just seemed to be this numbing thing: ‘Please go away, and take the story away with you,’” he told Boland.

Eugene Magee, the local newspaper editor, said the town was in deep shock.

“My job was to tell them they were not a crowd of savages,” he said.

He admits 34 years later that Ann’s death is still a taboo topic.  “There’s obviously a complete omertà on the thing, and nobody wants to talk about it,” he said.

Many found it unfathomable that no one said they knew Ann was pregnant. Magee said many actually did, yet the name of the father was never learned.

On the airwaves at the time, women flooded the popular Gay Byrne radio show with their own harrowing stories of how they had been forced to hide pregnancies, sometimes from rape, and what had become a national dirty secret, at last, came out in the open.

Ann Lovett in death had forced recognition of all that. But it came at a terrible price.