The wonderfully strange history behind the Irish saying “chancing your arm”

"Chancing your arm" has one of the most interesting backstories of any Irish phrase. 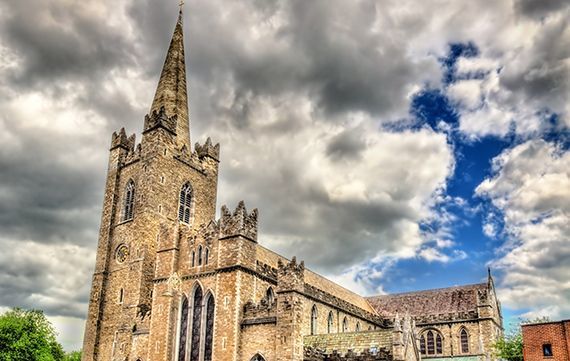 Chancing your arm was born in Saint Patrick's Cathedral in Dublin. iStock

Irish sayings tend to have a storied past and the Irish phrase "chancing your arm" is not different.

The term boycott is rooted in the Irish "Land War", when the people of Ballinrobe in County Mayo ostracized land agent Captain Charles Boycott rather than face eviction.

The phrase "away with the fairies", meanwhile, has origins in Irish folklore, referring to mythological fairies picking people up and taking them away.

However, the phrase "chancing your arm" arguably has one of the strongest and most interesting backstories.

The phrase reportedly dates back to a family feud in 1492 between two Irish families and it meant something completely different than it does today.

The Butlers of Ormonde and the FitzGeralds of Kildare were involved in a bitter feud over who would become Lord Deputy of Ireland - the British Monarch's representative in Ireland.

Realizing that the fighting was out of control, the Butlers took refuge in the Chapter House of Saint Patrick's Cathedral in Dublin.

The FitzGeralds followed them into the cathedral and urged them to come outside and make peace.

Fearing that they would be slaughtered if they agreed, the Butlers refused and remained inside the cathedral.

With the Butlers remaining staunchly inside the cathedral, the FitzGeralds had to do something to reconcile the situation.

As a gesture of good faith, Gerald FitzGerald, the head of the FitzGerald family, ordered that a hole be cut in the door to the room where the Butlers were holed up. He then placed his arm through the hole, offering his hand as a sign of peace.

The Butlers reasoned that FitzGerald was serious in his intention to make peace given that he was willing to risk his arm and so they emerged from the Chapter House and made peace, giving birth to one of the best-known Irish phrases.

The phrase clearly had a different meaning than it does today, signaling reconciliation or peace rather than opportunism as it does in 2020.

Meanwhile, the original door used to make peace in 1492 has since been renamed the Door of Reconciliation and can be viewed in the north transept of Saint Patrick's Cathedral in Dublin.

This odd looking thing is a door... just an ordinary door... or is it?
Ever wondered where the Irish phrase “to chance your arm” comes from? In 1492 two Irish families, the Butlers of Ormonde and the FitzGeralds of Kildare, were involved in a bitter feud. (1/4) pic.twitter.com/bhLJ2hiTZO