Much of Cork's city center was under a meter of water on Tuesday. 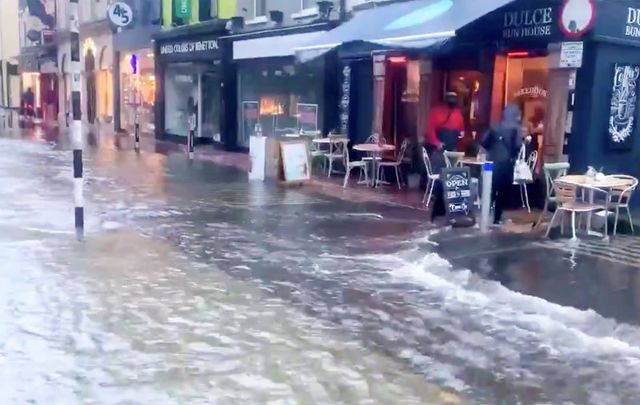 Around 100 buildings and dozens of parked cars were damaged by flooding in Cork city center following Tuesday morning’s high tide, with damage estimated to run to millions of Euro.

Significant flooding was also reported throughout the county.

Many streets in Cork City were under up to a meter in water, and at one stage the reporter on RTE told radio listeners, “The South Mall is like a lake.”

Flood warnings were issued in advance but the speed at which the waters rose appeared to have taken many people by surprise.

Beer kegs spotted floating down the street in Cork, Ireland, as city streets are inundated by flooding. https://t.co/3MkyRigqEw pic.twitter.com/Ua7aEL4icb

Many business owners, desperate to earn their final euros before Wednesday’s COVID lockdown for six weeks, had to bail out waters after the River Lee burst its banks.

Cork City Council advised motorists to avoid the city center for a number of hours up to mid-morning.  Gardai (Irish police) were forced to close off a number of low-lying streets as floodwaters began to make them impassable.

Across the city center, the north channel of the River Lee spilled out through openings in the quay walls at Lavitts Quay, flooding the roadway, but business owners were saved from flooding by having high steps into their properties.

#CorkFloods Flooding at Cornmarket Street and the Quays this morning. pic.twitter.com/5mtLJLhVvf

The campaign group, Save Cork City. mounted a number of legal challenges last year to Cork City Council’s €6 million Morrison’s Island Public Realm Project, which is incorporated in a scheme to protect the area from tidal flooding from the south channel of the Lee.

The group has appealed to the High Court for leave to seek a judicial review of the An Bord Pleanala (the planning board) decision that approved the scheme.

The High Court is due to rule on November 3 on whether or not the group can proceed with the challenge.