From the Clare side of the moon

"My ramblings from Co. Clare when the Chinese space farmers are harvesting their first crops of lunar cotton." 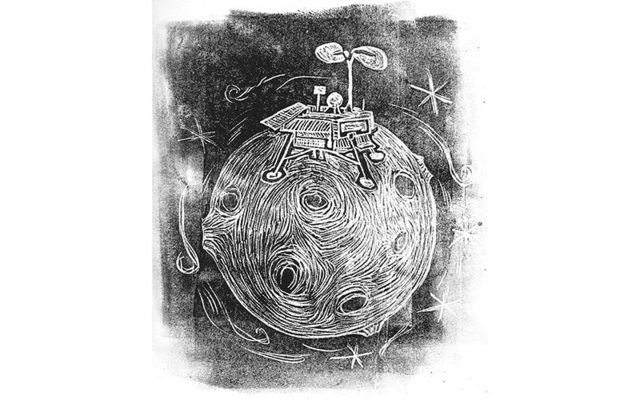 "My ramblings from Co. Clare when the Chinese space farmers are harvesting their first crops of lunar cotton."

Hello again wherever you are reading this in the depths of an Irish winter which, as far as I’m aware, is replicating itself dramatically across Europe and the United States and elsewhere far from Co. Clare, where, to tell ye the truth, it is cold enough too tonight.

Again, wherever ye reside, there is no better protection against the global realities and problems of winter nights than a good strong hot whiskey tinctured with honey. I’m relishing mine as I meet Debbie’s deadline from the other Atlantic coast. Forgive me, accordingly, if my aged fingers begin to stumble and even stagger a bit on the way home!

Maybe I’m already losing the run of myself early, I have to say that the news story that caught my attention most strongly in the last few hours had nothing at all to do with this troublesome Brexit business (which nobody has figured out yet for sure, especially the British government, entrapped in the confusion of its own entrails) but another yarn entirely from the dark side of the Moon. This yarn, incredibly enough, claims that the Chinese landing craft has successfully sprouted cotton seeds during experiments there.

Before that yarn broke I was most fascinated by a related kind of report from Hawaii that the last known land snail had died there last week, making the species extinct. Now I have forgotten about the poor snail as I ponder the possibilities of the wily Orientals soon beginning to formally claim the acreage of the moon for themselves for agricultural and political developments down the mysterious years ahead.

Can any nation lay claim to the moon in all fairness? That one is beyond my baffled brain tonight under what is allegedly a special full moon in the skies above the Shannon.

It could be special, indeed, but it is obscured entirely by January’s shawl of mist and fog high above my windows. I need another sip of my hot toddy immediately!

Which brings us back, for a bit of craic maybe, to that “deadline” which my favorite editor Debbie McGoldrick imposed on me a few hours ago across the Wild Atlantic Way. The truth is that there is nothing more demanding in this trade than the ineptly termed “deadline.”

A deadline is very much a liveline with a sharp edge. Debbie would probably show me the door after 30 years and more of faithful hackery for the Irish Voice if I fail to deliver on time. Myself and the hot toddy and the hidden full moon above the mists and Shannon fogs will hopefully keep me safe for another couple of weeks!

With the help of various divinities of all species beyond our ken, maybe ye will still be fuming over my ramblings from Co. Clare when the Chinese space farmers are harvesting their first crops of lunar cotton, and when some Paddy in Hawaii will proudly announce to the world that he has successfully discovered and bred that allegedly extinct land snail that hit the deadlines last week.

And he might claim that he is christening the snail after your beloved president. Nothing would surprise us nowadays.  Nor most of you with Celtic blood in your arteries and veins either I fancy!

There is a further Celtic reality which enters my zany head just now under that invisibly misted blue moon above my Clare chimney in Killaloe on the banks of the Shannon. It is in relation to the invariably temptingly lovely thatched cottages which often appear on IrishCentral for sale in recent years.

We bought one of them many years ago, Annet and I together, and it was a magnificently surreal experience because, in shorthand, that old cottage in Carhue near Shannon was a spiritual kind of home in which to live with respect and not a little awe as well.

I would suggest to any of you considering the purchase of an Irish cottage in this infant year, that ye check out the family history attached to the rafters that will be home in future for you and yours, usually on a holiday basis.  Use local knowledge through the real estate agent to ensure the spiritual ghost you inherit, like that of gentle Maisie, is as positive as ours was at all times down the decades we dwelt there. And I’m well aware that George, now a friend, feels likewise.

This, my friends, is solidly good advice. A cottage or older rural home anywhere in Ireland, that seems at first to be a really bargain buy for you, may have the kind of sad family history that means locals would never purchase it.

Not all the resident spirits are as gently benevolent as our Maisie has always been. I think she is not far away from me now in Killaloe in another dimension, and that is not the hot whiskey talking either!

Finally, at the risk of becoming even more boringly repetitive than ever, can I urge all visitors to the Emerald Isle this year to be strongly aware that our policemen in 2019 are very strict, and properly so, in relation to driving whilst having taken a few pints in the local pub. You could lose your driving license and maybe even land up in the nearest cell for the night.

The era of the hard-drinking Irishman singing ballads and driving home “happy” in his cups along narrow rural boreens is over.  Just be aware of that reality on any vacation this year.

And there I’ll conclude under the invisible blue moon. Good wishes to all, and if I have another hot whiskey sure that’s my own business!