The most ridiculous idea to have emerged in the Brexit debate - and that's saying something - is that it will lead to a united Ireland in the near future. 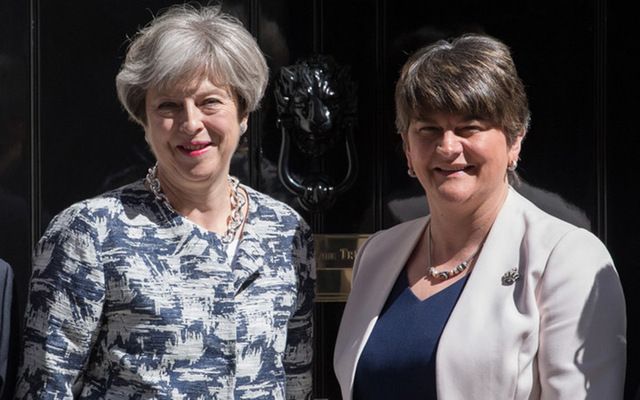 The most ridiculous idea to have emerged in the Brexit debate -- and that's saying something given all the nonsense that surrounds the topic -- is that it will lead to a united Ireland in the near future.

A majority in the North voted to remain in the EU, but this was negated by the overall vote in the U.K. which was for Brexit.   As a result many people in Northern Ireland, including a good number of unionists, feel cheated.

They are unhappy because they are being forced down a perilous path they did not choose, one that could severely impact their standard of living.  And because of that, the theory goes, they might be open to a previously unthinkable move.

When Brexit turns into a lame duck -- and it will -- the Democratic Unionist Party (DUP) unionists who voted to leave will soon realize they made an enormous mistake. When they wake up after Brexit and smell the coffee south of the border they will see that life down there (because the Republic is in the EU) is much better.  And at that point, the theory suggests, they will come to their senses.

Like the pragmatic people they are, the unionists who voted for Brexit will come to the conclusion pretty quickly that they need to get back into the EU.  The only realistic way they will be able to do that is as part of a united Ireland.  Helpfully, the EU has already said that the North can rejoin after Brexit without any delay if it decides to be part of a united Ireland.

The theory has some credibility.  Apart from all the other major benefits for the North of being in the EU, there are the EU payments and grants that provide over 80 percent of income for farmers there, including all the unionist farmers.  Can the U.K. be relied on to replace that after Brexit?

Then there are all the complex problems of having a border again between North and south after Brexit, which will hit both agriculture and industry -- plus there will be smuggling, security issues, etc.  Obviously, there would be no border in a United Ireland.  No border, no problems.

So staying in the EU by joining a united Ireland makes perfect sense, according to the theory.  It's almost convincing.

Except that we all know there is not a snowball's chance in hell of unionists deciding to join a united Ireland.  It contravenes everything they stand for, everything they are.  It would require unimaginably extreme circumstances before they would even consider it.

And the reality is that those circumstances are unlikely to come about even if things do go a bit pear-shaped in the U.K. after Brexit.

The reason is it's unlikely to get that bad in the North thanks to the deal the DUP has done with British Prime Minister Theresa May as the price of keeping her in power. The £1 billion deal the DUP has already done with her is just the start of it -- there will be lots more where that came from in the next few years.  So the unionists are in a very strong position, and the abhorrent idea of joining a united Ireland will be the last thing on their minds.

Of course if the Brexit fallout theory is not going to work, then there is always the numbers game beloved of Sinn Fein.  As you may know, we are now close to the tipping point in the North where Catholics will outnumber Protestants.  In fact we may have already passed it.

In the last census in 2011 the split was 48 percent Protestant to 45 percent Catholic and the gap had narrowed by a few points since the previous census in 2001.  If that trend continues -- and the last elections in the North showed that it is continuing -- there is no doubt that the next census in 2021 will show that Catholics are a clear majority.

As we said, that may already be the case. But to jump to the conclusion that those numbers, even with the added fallout from Brexit, mean that there would be a majority in the North to join a united Ireland would be foolish.

The 2016 Life and Times Survey (an annual survey conducted by universities in the North), which was taken after the Brexit result, showed that a four to one majority of people in the North wanted to remain in the U.K.  Significantly, it showed that even among Catholics in the North there was a two to one majority in favor of staying in the U.K.  They might never vote for a unionist party, but that does not mean they would vote to join a united Ireland.

Why?  The short answer is we don't know, but the likely reason is that they know which side of the bread they have with their Ulster Fry is buttered on.

They are skeptical of the ability of the Republic to absorb the enormous cost of supporting living standards in the North, including the huge benefits and welfare bills there, the cost of the health service, education and so on.

Like the majority of people in the south, they are unconvinced by any tame economist produced by Sinn Fein predicting huge economic benefits from unification, giving Germany as a template.  The reality is there is no comparison between the German and Irish economies and situations (they didn't have a potential unionist backlash problem, for example).

But even if one assumes an economic bonus from unification a decade down the line, there is an immediate and massive problem – the £10 to £12 billion transfer every year from the U.K. exchequer to support the North.

There is some argument about this amount, since it includes the North's share of overall U.K. costs (like embassies around the world etc).  But even if you strip that out, there is general agreement that the North gets at least £7 or £8 billion a year in direct funding spent locally.

If we were to raise taxes people would want it spent here on failings in housing, health and so on, challenges that will be even greater as our economy adjusts to life after Brexit.

Of course various polls in the past have shown a significant level of support for a united Ireland among people in the south. But it is largely theoretical and superficial.

When follow-up questions are asked about how much extra tax people here would be prepared to pay to fund unification that support begins to disappear.  And no one believes that Britain would continue to pay the bill for the North after unification, apart from an initial token contribution.

Despite all this, the Brexit mess and its implications for the North, plus the emergence of a Catholic/Nationalist majority there, have led to renewed calls from some in Sinn Fein for a border poll here in the near future.  Their belief seems to be that they can get a majority vote in the North for a united Ireland, although whether that turns out to be true is doubtful, as outlined above.

But it's not just a question of getting a majority in the North.  Under the Belfast Agreement, separate polls have to be held north and south and a majority in both jurisdictions would be needed for unification to happen.  And as the issues involved are fully explained to people in the south -- as well as the enormous costs -- that is likely to be very difficult to achieve.

What happens, for example, if there is a majority in the North in favor of unification but a sizable rump of angry unionists who bitterly oppose it?  Any forced reunification might see the emergence of The Troubles Mark 2, this time with loyalist paramilitaries attacking Dublin.

Even if the majority of unionists could be persuaded to join a new federal Ireland and were given seats in the Dail as well as their own local parliament in the North and all kinds of guaranteed rights in the new united Ireland, what about the hard men who would disagree?

Would people in the south really be prepared to vote for a united Ireland if they thought there was a chance that shootings and bombings could be back again, this time in Dublin instead of Belfast?

Even without considering such dire possibilities, there is anecdotal evidence here that some people in the south are less than enamored at the prospect of joining with the North.  On radio phone-in shows one frequently hears negative comments about Northerners, about how they are always whinging and moaning, blaming everyone else for problems, demanding endless state handouts, are hopelessly divided and bigoted, stuck in the past, etc. etc.

The supposition that everyone in the south looks forward to the day all of Ireland will be a nation once again may be a misreading of what the real attitudes here are, at least among some people.

The bottom line on all this is that Brexit does not mean that a united Ireland is any nearer. On a simplistic level it might appear to be an opportunity since a majority in the North voted to remain in the EU.  But it's far more complicated than that.