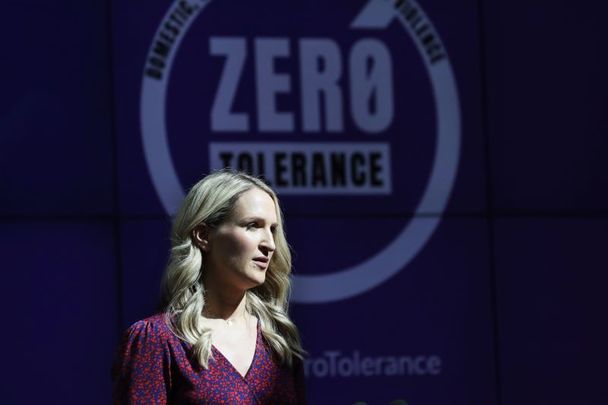 June 28, 2022: Minister for Justice Helen McEntee speaking at the launch of the Zero Tolerance strategy and accompanying action plan to tackle domestic, sexual, and gender-based violence. in the Department of Justice. RollingNews.ie

Criminal penalties for domestic abusers, including gender and sexual-based violence, will double under the Irish government’s new €360 million plan.

The maximum sentence for assault causing harm, one of the most common offenses in domestic abuse cases, will double from five to 10 years.

Additionally, a five-year strategy will see a doubling of the number of refugee spaces nationally from 141 to a least 280.

Included in the plan’s 144 actions will be an increased focus on hearing the experiences of children living with domestic violence.

Coming amid surges in cases of abuse to helplines and the courts since the pandemic, the plan will be overseen by a new statutory agency with “real teeth, timelines and funding,” to be fully operating by January 1, 2024.

A dearth of refuge spaces – including none in nine counties – led to 62 percent of requests for refuge being turned down last year. Women’s Aid, the lead non-statutory organization responding to domestic violence, last year recorded 10 percent more disclosures (33,831) compared with the previous year (29,717).

On her way into Cabinet to present the strategy on Tuesday, Justice Minister Helen McEntee, said the plan will have zero tolerance for violence against women. She described the strategy as the “most ambitious” plan to date.

McEntee told RTÉ, “It means not turning a blind eye when abuse happens, just because it’s behind closed doors or in a relationship. It means not laughing off inappropriate comments or touching, whether it’s in person or WhatsApp group, but it also means getting right back to teaching younger people what a healthy relationship is.”

McEntee told The Irish Times that projects to increase awareness, and “change the widespread attitudes which underpin domestic, sexual and gender-based violence” would be rolled out, beginning with national school-age children, through the education system, and in wider society.

While past plans had made progress, there was a moment now, since Covid and particularly since the killing of schoolteacher Ashling Murphy in January, when people’s minds were “really focused,” she said.

The strategy is viewed as ambitious because of the level of support McEntee has secured from numerous departments, state-funded organizations and non-government organizations.

Chief Executive of Women’s Aid Sarah Benson said her organization “applauds the ambition” of the plan. She praised McEntee, who along with her colleagues, had done “incredible hard work to get it to where it is now.”

Anne Clarke, a board member of Safe Ireland, said that doubling the maximum sentence for assault causing harm was hugely significant and she hoped the planned changes would prove to be a game changer for domestic abuse victims.