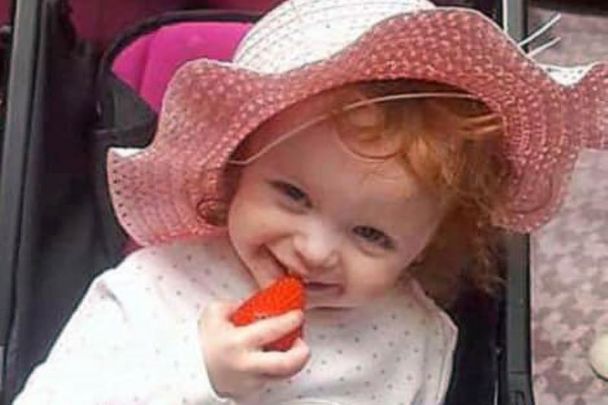 All of Ireland weeps this week for baby Santina Cawley as her killer, her father’s girlfriend Karen Harrington, starts a life prison sentence.

Photographs of two-year-old Santina, with a pink-trimmed hat atop her beautiful curly hair, prompted tears for many parents as they read trial details of her awful murder by 38-year-old Harrington.

Santina’s mother Bridget O’Donoghue, who was separated from the child’s father Michael Cawley, delivered a heartbreaking victim impact statement to Judge Michel McGrath and the jury at the Central Criminal Court in Cork.

O’Donoghue, left haunted by questions about her daughter’s death, said, “I wonder was she looking for me in those last moments.”

Harrington started her life sentence on Monday evening at the end of her four-week trial for murdering the toddler at an apartment on Boreenmanna Road, Cork City.

Judge Michael MacGrath, imposing the mandatory life sentence, said, “The murder of Santina Cawley, a defenseless two-year-old child, is truly shocking. It goes against nature for parents to bury a child but to lose a child in these circumstances is beyond description.”

He said the torment was worsened by the knowledge of the terror that Santina was subjected to and the “brutal nature of her death.”

The court heard the toddler died from traumatic brain damage and a severe spinal cord injury after suffering a total of 53 different injuries in Harrington’s flat in the early hours of July 5, 2019.

Harrington, who had been trusted with the child while her father walked into Cork city center for two hours at 3 am following a dispute after an alcohol and drug-fueled night, remained expressionless as she was convicted.

The court heard how she was in a relationship with Cawley, who was separated from the mother of his five children. During a night on the town, after several hours of drinking and smoking cannabis, Harrington had gone home in tears after being called “a prostitute” by Cawley.

He also returned later and, before again going back out alone in the early hours, he left Santina with Harrington, whom he trusted to care for her. The jury earlier heard how Cawley often cared for Santina.

The prosecution said the evidence showed Harrington was alone in the apartment with the little girl from 3:10 am to 5:11 am. Harrington’s DNA was on a blood spatter found on Santina’s pink T-shirt, and Santina’s DNA was found on a blood stain recovered from a pair of adult female leggings discovered in a back bedroom.

Clumps of Santina’s hair, torn from her head, were found on the floor and couch while one of her earrings was on the ground. The child was found naked and blood-spattered.

He added, “This was a particularly emotive case for the members that attended the scene and the investigation team, many having children of a similar age. Santina was always in our thoughts.”

Harrington gave sworn evidence in her own defense, insisting she had not harmed Santina. However, she was unable to explain how the child suffered critical injuries as well as bruises to almost every part of her body at a time when she was the only person with her in the apartment.

There was no visible reaction from Harrington when the guilty verdict was handed down. Her counsel Brendan Grehan said he had no instructions to say anything on her behalf.