"I can’t tell you how good it is to be back.  I’ve missed my family and friends here so much." 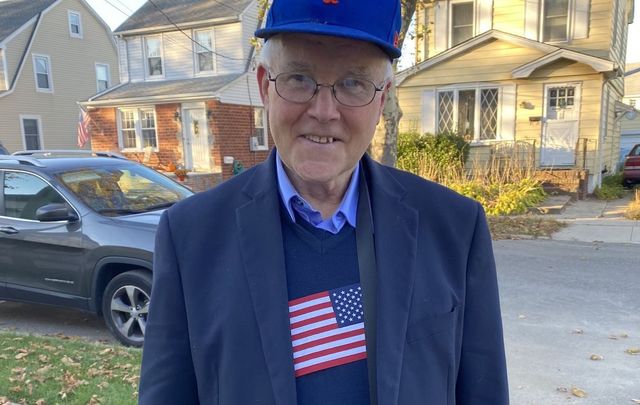 The Covid-19 U.S. travel ban on most foreign visitors was lifted on Monday and Irish citizens are coming to America in their droves, eager to reunite with family and friends.

Father John Egan, a native of Thurles, Co. Tipperary, has been to America more than 50 times since his maiden voyage in 1968, he estimates. But his return to New York on Monday aboard Aer Lingus flight EI 105 from Dublin, the first to carry so-called “non-essential” visitors since the U.S. implemented a Covid-19 travel ban in March of 2020, is his sweetest journey yet.

“I can’t tell you how good it is to be back. I’ve missed my family and friends here so much. Spending weeks in New York during the summer has been my routine for a long time, but November is great too,” Egan told the Irish Voice from his brother Pat’s home in Williston Park, Long Island.

His sister-in-law Peggy collected him from a jammed JFK Airport full of excited family members and friends waiting for loved ones they had not seen for nearly two years or more.

The calendar says Christmas is on December 25, but for so many, the holiday came early when the Aer Lingus passengers finally touched the JFK runway at 1:50 p.m., 35 minutes ahead of schedule and not a moment too soon on the day when the Biden administration lifted the pandemic ban on travel to the U.S. from a host of countries including Ireland.

There wasn’t an empty seat on the 105, and the pre-departure atmosphere at Dublin Airport was electric, Egan says.

“I got to Dublin at 8:30 in the morning for the 11:30 flight time. The airport was packed. I’ve never seen anything like it. I usually fly from Shannon but the planes aren’t leaving from there yet. I’ve flown from Dublin before but this was like a party,” he added.

Passengers and staffers were in a buoyant mood, with mini American flags in abundance and the anticipation of the Big Apple after all these months palpable.

Given that so many planes bound for the U.S. during the travel ban have flown at less than capacity – and in the early months of the pandemic, almost empty – Egan thought the Aer Lingus ground staff in Dublin might be overwhelmed. In fact, it was the opposite. 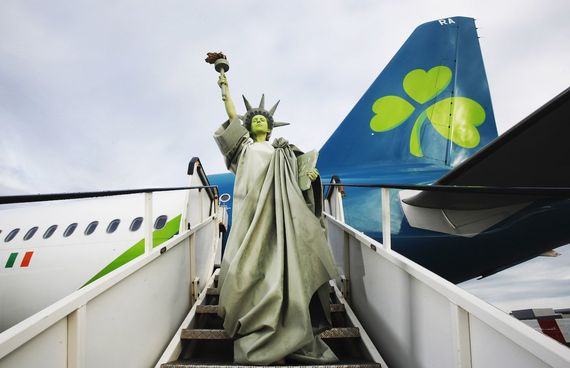 Aer Lingus rejoice as flights to the United States from Ireland are relaunched.

“It was very easy to get from A to B. I had all my documents uploaded and approved on the VeriFLY app before I got to the airport so there was no paper needed,” says Egan, referring to the application that verifies Covid-19 travel documents before a passenger’s departure and facilitates easier check-in.

For those who didn’t have VeriFLY, Aer Lingus had old-school lines for check-in, Egan noted. All non-citizen travelers to the U.S. must provide a negative Covid-19 test 72 hours prior to departure and also proof that they are fully vaccinated.

U.S. Customs and Border Patrol in Dublin, which clears passengers for entry to America, was also ready for capacity planes, Egan said.

“I was surprised that U.S. immigration was so easy. Everything was organized and moved pretty quickly. I didn’t see anyone having any problems.”

The flight itself couldn’t have been smoother. The captain welcomed all aboard the historic journey, and JFK’s ground crew was waiting with American flags to greet the arrivals.

Given the pent-up demand to fly to the U.S., how did Egan get so lucky to snag a seat on the Monday morning flight?

When the Biden administration finally announced on September 20 that it would allow November entry to the U.S. for many fully vaccinated foreign visitors, including those from Ireland, Egan opened his iPad and immediately booked a flight to depart Dublin on November 8, even though it took weeks for the U.S. to confirm that the 8th would be the first date for approved travel.

It was pure luck and a bit of common sense, Egan says, that resulted in his booking on day one of permitted travel.

“I thought it might be November 1 that the Irish could finally go, and I figured the rush wouldn’t be so bad by the 8th so I’d wait until then.  I got a great airfare, €400 return with a checked bag because Aer Lingus had a sale, so I’m happy,” Egan added.

“Lots of people on board were saying that they paid more but they didn’t care. All they wanted was to get back to America.” 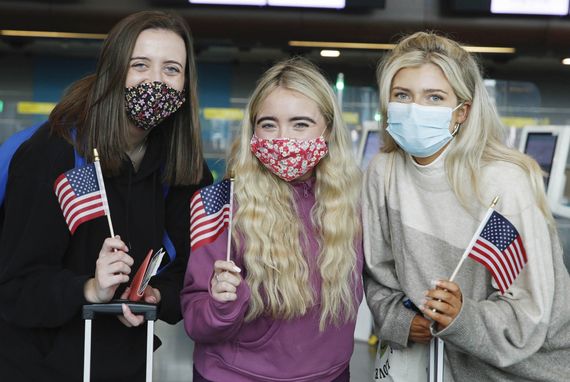 Read to get back! US opens its doors to Irish travelers once again.

Egan, who served the parish in Lattin, Co. Tipperary for decades, has lots of catching up to do in New York. He has a new grand-nephew, Emmett, who he will christen in a couple of weeks, and a grand-niece, Finola, who received the sacrament when it was thought that Father John wouldn’t make it to America for quite some time.

But he’s back and here until December 1. And he couldn’t be happier to celebrate his first Thanksgiving in New York.

“Covid has taken a toll on all of us. So to have some normality back is special, and there’s no place better than here in New York,” he said.

Flights from Dublin to Boston, Chicago, Washington, D.C., and New York are virtually sold out for the coming days, Aer Lingus said in a Monday press release.

“Today marks a very important moment for Aer Lingus, the travel and tourism sector and the whole Irish economy. Aer Lingus will reconnect friends and family, businesses and colleagues on both sides of the Atlantic. After 20 long months, we are re-establishing Dublin Airport as the most efficient connecting hub between the U.S. and Europe,” said Aer Lingus CEO Lynne Embleton.

Dublin is the only Irish airport currently being serviced by Aer Lingus’ trans-Atlantic routes. The airline will resume Shannon Airport flights to and from the U.S. next March.