A local priest has granted a special place in heaven for Trump brothers Eric and Donald Junior after their pub crawl in Doonbeg on Wednesday night. 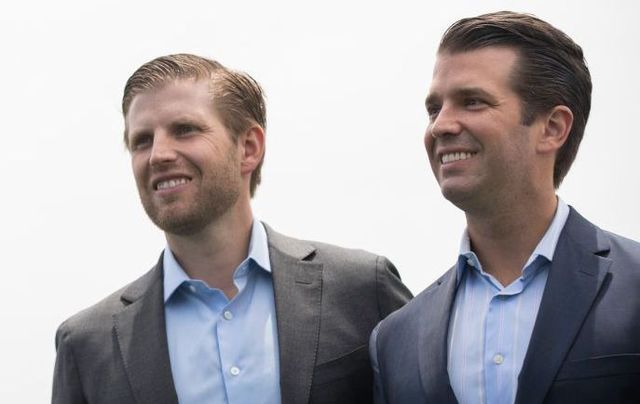 A local priest has granted a special place in heaven for Trump brothers Eric and Donald Junior after their pub crawl in Doonbeg on Wednesday night.

An Irish priest has said he is saving ‘a special place in heaven’ for Donald Trump’s sons Eric and Donald Junior after the two brothers visited a multitude of local pubs in Doonbeg on Wednesday night.

Doonbeg parish priest Joe Haugh had previously pledged a place in heaven for President Trump but has now extended that pledge to include his two sons and their families.

The priest gave Trump’s sons a portrait of a local 16th-century castle, adding that it was “testament to the work and strength” of the people of Clare.

The portrait was presented to the Trump brothers in Igoe’s Bar in Doonbeg as the pair embarked on their village pub crawl.

Explaining the meaning behind the gift, Fr Haugh remarked: “I wanted to give them a gift to thank them very much for all they do for the area.

“They provide around 300 jobs here, no one else is doing that for us.

“The vegetables they use, the meat, the fish for the restaurant, that all comes from local suppliers, the area needs the Trump hotel."

The Trump family is exceedingly popular in the West Clare village, with one-quarter of the population relying on the Trump international golf and hotel resort for employment and the rest of the village benefit from the heavy footfall from the hotel’s guests.

During the presentation of the portrait, Fr Haugh promised the two Trumps the same special place in heaven as he had promised their father, and explained how popular they were in Doonbeg.

Read more: In Trump era anti-Catholicism is still a thing

“Look at the crowds that came out to the streets and the pubs to welcome them to the village, they were so happy to see them and have them back in Clare,” Haugh added.

“They are very welcome here.”