US Senator Chuck Schumer has lent his support to the ongoing campaign to name a ship in honor of Irish Vietnam war hero, Bob Gallagher. 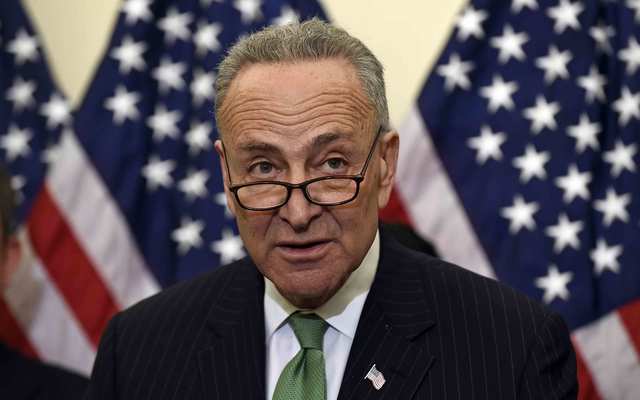 US Senator Chuck Schumer has lent his support to the ongoing campaign to name a ship in honor of Irish Vietnam war hero, Bob Gallagher.

As first reported in this week’s print edition of the Irish Echo, U.S. Senator Charles E. Schumer has urged the U.S. Navy to posthumously honor USMC Corporal Patrick “Bob” Gallagher by naming a ship in his honor.

“There is a powerful and growing chorus of supporters from Ballyhaunis to Brooklyn who are for naming a United States Navy destroyer after the Vietnam war hero from County Mayo, Corporal Patrick ‘Bob’ Gallagher, and I am proud today to add my voice to this very worthy cause,” Schumer said in a statement.

In a letter to the Secretary of the Navy, Richard Spencer, Schumer asked that the next available destroyer ship is named for Corporal Gallagher.

A newspaper report of Bob Gallagher's heroism in Vietnam.

“The courage and bravery of our fallen soldiers, including those immigrants who have made the ultimate sacrifice even before they have received citizenship, is the American dream manifest,” he said.

And he continued: “Corporal Gallagher’s breathtaking bravery and courage deserve to be memorialized and naming a Navy ship after the Corporal Gallagher would be the perfect tribute to recognize this Irish-American hero on behalf of a people who have contributed so mightily to the greatness of our nation.

“It would also duly recognize the deep love so many immigrants from every corner of the world have for America, and serve as an appropriate memorial for the countless newcomers to this nation who love America so much they are willing to serve this nation in our Armed Forces – and even to die for it.”

Schumer said there was precedence for honoring immigrant soldiers who have made the ultimate sacrifice and that the naming of a United States Navy destroyer was a fitting way to pay tribute to Corporal Gallagher’s sacrifice, to his willingness to serve his adopted nation, and that it would serve as a permanent reminder to all of his bravery, selflessness, and patriotism.

Senator Schumer also pointed out that, recently, a Navy destroyer was named after fallen USMC hero Rafael Peralta, also a recipient of the Navy Cross, for heroic actions that very closely paralleled those of Gallagher.

Schumer, the Senate Minority Leader, said that the naming of a destroyer for Gallagher was consistent with the Navy’s policy of naming destroyers for “distinguished heroes who are deceased members of the Navy, Marine Corps, and Coast Guard.”

The senator, according to a release from his office, has long supported honoring new Americans for their service. For instance, he introduced the Posthumous Citizenship Act, granting citizenship to brave soldiers and sailors like Corporal Patrick Gallagher who died fighting for their adopted homeland.

What follows is from the text of the letter from Senator Schumer to Secretary Spencer.

“As a result of Corporal Gallagher’s extraordinarily valiant and patriotic service in the Vietnam War, in 1967, he was awarded a Navy Cross in 1967, our nation’s second highest military award.

“After emigrating to America in 1962 from his home in Ballyhaunis, a town in, County Mayo, in Ireland, Patrick Gallagher moved to Long Island, New York, where he lived, worked, and studied with the American Dream in his heart. He enlisted into military service in 1966 and readily answered the call of his new nation. He was assigned to “H” Company, 2nd Battalion, 4th Marine Regiment, 3rd Marine Division. His unit was assigned to Vietnam and soon saw action in Operation Hastings.

“On July 18, 1966, while under enemy fire, Corporal Patrick Gallagher showed his extraordinary heroism and inspiring valor in the face of mortal threat.

“During the night, enemy fighters infiltrated the area occupied by his unit and threw grenades into their position.

“Corporal Gallagher kicked a grenade out of the area before it exploded, and then, according to his official citation, ‘another grenade followed and landed in a position between two of his comrades. Without hesitation, in a valiant act of self-sacrifice, Corporal Gallagher threw himself upon the deadly grenade in order to absorb its explosion and save the lives of his comrades.’

“As further grenades exploded in the position, Corporal Gallagher threw the grenade he was still lying on away from the position, where it exploded. Amazingly, no injuries were sustained in the attack.

“Corporal Gallagher saved his comrades from catastrophic injury and possible loss of life. His courageous actions were in the highest traditions of the United States Marine Corps and the United States Naval Service and he was justly awarded the prestigious Navy Cross for his deeds.

“Tragically, Corporal Gallagher was killed in action in DaLoc near Da Nang - along with several of his comrades - on March 30, 1967, just several days before his tour of duty was to have ended. Not yet a citizen, Corporal Patrick Gallagher had made the ultimate sacrifice for his adopted nation.

“His story and legacy remain alive and deeply impactful on all who hear it. Fifty years after being killed in action his sacrifice is still being honored in both America and Ireland.

“A well-supported petition campaign is under way, and, on March 30th of this year an event in remembrance of his life was conducted in his home town, which drew many hundreds of participants, significant media coverage on both sides of the Atlantic and a full honor guard of United States Marines from the American embassy.

“The naming of a United States Navy destroyer is a fitting way to pay tribute to Corporal Gallagher’s sacrifice, to his willingness to serve his adopted nation and will serve as a permanent reminder to all of his bravery, selflessness, and patriotism.

“The naming of a destroyer for Corporal Gallagher is consistent with the Navy’s policy of naming destroyers for ‘distinguished heroes who are deceased members of the Navy, Marine Corps, and Coast Guard.’

“Moreover, it is consistent with precedent; recently a Navy destroyer was named after fallen USMC hero Rafael Peralta, also a recipient of the Navy Cross for heroic actions that very closely parallel those of Corporal Patrick Gallagher’s.

“It will also remind all those many new Americans that are willing to serve this nation that America honors those who serve her. As the effort to name a ship in his honor has articulated, ‘This recognizes the many contributions of foreign nationals in U.S. Navy, U.S Marines & Armed Forces throughout our history, voluntarily serving with loyalty, honor, and commitment to their adopted country.

‘A U.S. Navy ship afloat with this heritage would be a welcome reminder to those at home that their loved one's service and perhaps ultimate sacrifice, were remembered by us, the citizens, members of our Armed Forces and the government of the United States of America.’

“I have long been a strong supporter of the United States Armed Forces, the Navy and the Marine Corps. I have also long been committed to honoring those new Americans who awe me with their willingness to serve their new nation.

“In 2003, after many years of working with committed advocates like the late John Leahy (and then General of the United States Marine Corps John Kelly) and the late Senator Edward Kennedy, I was extremely proud that the Congress passed the Posthumous Citizenship Bill to provide citizenship to those in our Armed Forces killed in action before they could achieve full citizenship.

“That day, 23 families of young Irishmen who served in the Korean War were granted citizenship. It was a moving day. Since then the bill has provided a way to honor other families – from many different nations – who have lost their loved ones in the recent conflicts in Iraq, Afghanistan and elsewhere.

“Remembering sacrifice and honoring our heroes matters. I can think of no better way for the United States Navy and the Marine Corps to eternalize and publicize the best of what America and our armed force stand for than to name a destroyer for Corporal Patrick Gallagher. Please contact me on this matters and others if I can be of any assistance.”