The campaign to have the name of Vietnam War hero and Mayo native Patrick “Bob” Gallagher affixed to the hull of a U.S. Navy destroyer is about to enter a new phase 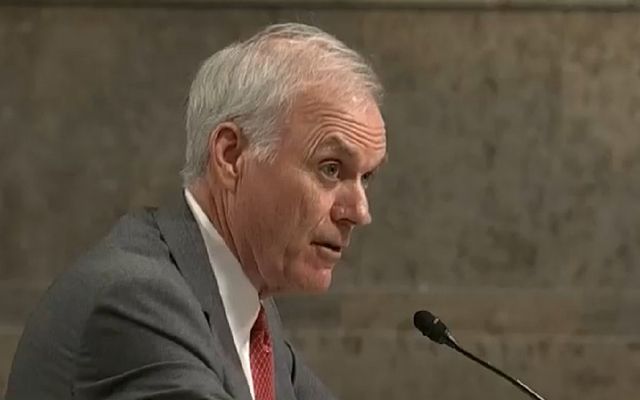 The campaign to have the name of Vietnam War hero and Mayo native Patrick “Bob” Gallagher affixed to the hull of a U.S. Navy destroyer is about to enter a new phase

And this new phase is not directly linked to the petition supporting the idea of the USS Patrick Gallagher.

Rather, it is focused on the likely new Secretary of the Navy, Richard V. Spencer.

The Senate Armed Services Committee has given Spencer the green light to take the top post in the Navy Department.

Spencer, an investment banker, was approved in a voice vote and now his nomination goes before the full Senate for a vote.

Senate approval is expected as Spencer has bipartisan support. He will replace former Secretary of the Navy, Ray Mabus.

Should he become Navy Secretary, Spencer will have it within his power to name an Arleigh Burke class destroyer (designation “DDG”) after Gallagher.

The petition backing such an outcome was aiming to secure 10,000 signatures by the end of this year.

Then the deadline was pulled back to September as signatures were being accumulated quickly and the 10,000 mark was being fast approached.

That mark was passed in recent days and signatures are still being gathered.

Gallagher, a native of Ballyhaunis, County Mayo, was about to depart Vietnam and the war when his life ended on what would have been his last patrol.

His hometown held Patrick Gallagher Memorial Day on March 30 of this year in memory of the Navy Cross and Purple Heart recipient.

Representatives of the U.S. Marine Corps and the Irish Defence Forces took part in that day’s commemorative events.

The Gallagher petition requests that the Secretary of the Navy consider naming a destroyer in Gallagher’s honor.

Gallagher, from Derintogher, Ballyhaunis, won the Navy Cross for heroism in Vietnam, but was shot dead while on Patrol in Da Nang on what would have been his final day “in country.”

The petition effort has been led by Martin Durkan, a Mayo native now living in California, and Dallas, Texas-based Dublin native, Marius Donnelly.

The aim is to have Gallagher’s name assigned to an Arleigh Burke ship.

The current list of such ships reaches the 126 mark (the first have been DDG-51, the USS Arleigh Burke, which entered service in 1989).

The Gallagher petition supporters and sponsors are hoping that the Mayo man’s name be given to DDG-127.

Lucas won the Congressional Medal of Honor at age seventeen for heroism above and beyond the call of duty while serving as a Private First Class in the Marine Corps during the Battle for Iwo Jima in World War II.

The story of Lucas’s heroism is astonishingly similar to Gallagher’s.

During a close firefight in two trenches between Lucas and three fellow Marines with eleven Japanese soldiers, Lucas saved the lives of the three Marines from two enemy hand grenades that were thrown into their trench by placing himself atop one grenade, while in the next instant pulling the other grenade under him.

The grenade he covered with his body exploded but only wounded him; the other grenade did not explode. Lucas was the youngest Marine and the youngest serviceman in World War II to be awarded the nation’s highest military decoration for valor.

Lucas survived the war and died in June 2008.

In July, 1966, while other members of his patrol slept, Gallagher’s unit was attacked at Cam Lo, not far from the border with North Vietnam.

Gallagher kicked a grenade away before it exploded and, as the citation for the Navy Cross he was later awarded read, “another enemy grenade followed and landed in the position between two of his comrades. Without hesitation, in a valiant act of self-sacrifice, Corporal Gallagher threw himself upon the deadly grenade in order to absorb the explosion and save the lives of his comrades.”

As the three other marines ran to safety, two further grenades landed in the position and exploded, “miraculously injuring nobody.”

Also miraculously, the grenade under Gallagher had not exploded.

His squad leader ordered him to throw the grenade into a nearby river.

It blew up on hitting the water.

Two very similar stories but only one of them has, to date, resulted in the naming of a ship.

The future and more advanced Arleigh Burke destroyers will be a variant on the original design and are designated as “Flight III” ships.

Plans are – though they are always subject to change – that at least 22 Flight III ships will be constructed between now and 2031, thus opening up multiple opportunities for a USS Gallagher.

One hopeful outcome in the confirming of Spencer as Navy Secretary is that he, like Patrick Gallagher, served in the United States Marine Corps.

Spencer was a Marine pilot.

More on the petition at www.patrickgallagherusmc.info