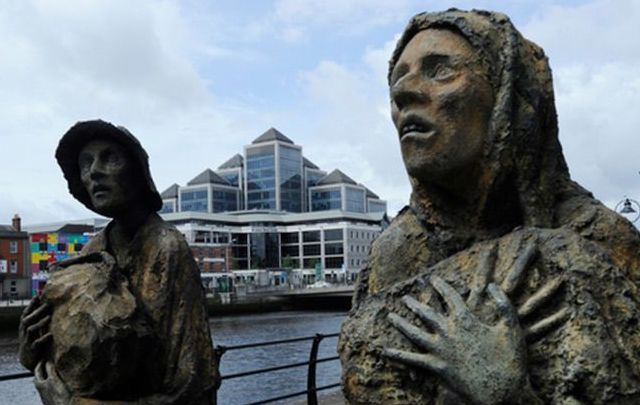 The Famine had a profound influence on Catholicism in Ireland according to RTE’s new documentary ‘Rome V Republic,’ which premieres in Ireland on Thursday.

The Independent reports that the documentary,  ‘Rome V Republic,’ which is presented by former Justice Minister Michael McDowell, finds that Irish people in the late 1700s and early 1800s had a much more lax attitude towards mass-going.

Dr. Sarah Roddy from the University of Manchester said: “We know people wouldn’t have gone to mass every Sunday but this is not to say they weren’t religious in their own way.”

“But I suppose the church might have seen as a kind of unorthodox religion which combined going to mass every now and then but also doing things which had ancient pagan roots as well.”

Read More: It seems many in DUP hate Catholics more than saving Brexit

In the early 19th century, Daniel O’Connell’s nationwide campaign for Catholic emancipation in Ireland energized Irish Catholics, but it was the mid-century Great Hunger that granted an unexpected opening for the Catholic Church.

Professor Mary Daly from UCD correlates Ireland's dramatic population change as a result of the Great Hunger and the Catholic Church’s influence in Ireland.

“The reality about religion pre-famine, it’s not like the place was full of atheists, it’s just that in many areas there aren’t enough priests,” says Professor Daly.

“Basically the Catholic Church in 1841 did not have the manpower to really look after the six million-odd Catholics in Ireland at the time.”

“A lot of the population loss occurred in the poor and very poor people who were not regular Sunday mass goers, who would have practiced a different form of Catholicism based around a good mixture of superstition and folk belief with Catholicism.”

“They are removed from the scene,” says Professor Daly.

“The people who really come through are the farmers.”

“They are not the dominant group, publicly, socially, the church is very heavily dependent on a rising middle class, shop keepers, merchants in town.”

“They were the people who would have educated their children, they would be God-fearing, respectable is the word worth using. Many would have aspired in time to send a son into the priesthood, so the Catholic Church is in a stronger position, absolutely.”

DCU’s Dr. Daithí Ó’ Corráin said the Catholic Church’s huge numbers of vocations fell dramatically as soon as free secondary school education came about in 1967: “After that, vocations literally fall off a cliff.”