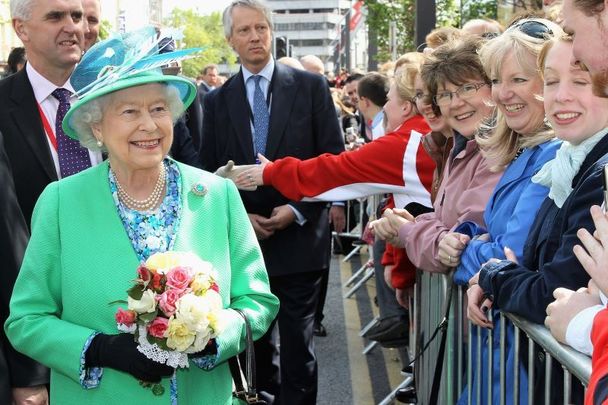 May 20, 2011: Queen Elizabeth II is greeted by well-wishers during a historic first walk-about as she meets members of the public after visiting the English Market in Cork, Ireland. The Duke and Queen's visit to Ireland was the first by a monarch since 1911. Getty Images

“Many of us in Ireland, too, have been greatly saddened by her passing,” Ireland's Minister for Foreign Affairs Simon Coveney said on Monday of Queen Elizabeth II's death.

Coveney was speaking from Co Cork to CNN's Christiane Amanpour on Monday, the day Queen Elizabeth II’s funeral was held in London.

“We know [in Ireland] the significance of what she achieved as head of state.

“She chose to come to Ireland in 2011 which was the first visit of a monarch since Irish independence. That was a significant gesture, she wanted to do it, we know that.

“And Ireland was nervous about that visit; we weren’t quite sure about how Irish people would respond.

“But from the very moment she stepped off the plane, dressed in green, full of smiles, and the generosity and respect with which she addressed the complexity of British - Irish history, with pain and trauma at different times, I think won over a nation next door, here in Ireland.

“And ever since then, I think people in Ireland have held her in great affection.”

Coveney said he accompanied the Queen and her husband Prince Philip during their 2011 visit to Ireland and recalled warmly how in Cork City, the Queen met with members of the public despite concerns about safety.

“It was a moment really in Irish history when a lot of the tension of the past was put to rest,” Coveney said, who went on to say that the Queen’s son, the new King Charles III, has come to Ireland virtually event since the historic 2011 visit and that he’s pledged to visit every county in Ireland.

Coveney continued: “The royal family sees it as part of their duty to sustain and protect the relationship between Britain and Ireland, which is a very close one, but of course a very complex one in the context of history as well.”

Coveney went on to say that Queen Elizabeth II represented a thinking of "generosity and respect, and one of equality, which is what I think meant so much to Irish people.”

During her state visit to Ireland in 2011, Queen Elizabeth II was accompanied for much of the time by now Foreign Minister @simoncoveney – who tells me of a moment when the Queen dismissed security concerns when she decided to meet the people who’d come to see her visit. pic.twitter.com/qvJYbBBZPh

While Coveney was in Ireland on the day of Queen Elizabeth II's funeral on September 19, several Irish dignitaries were in attendance, including President of Ireland Michael D. Higgins and Taoiseach Micheál Martin.