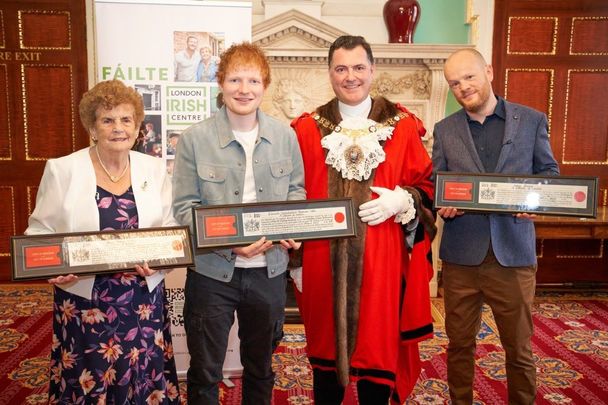 Ed Sheeran, one of the most successful singer-songwriters of his generation, has been awarded the Freedom of the City of London. Sheeran was honored as a Patron of the London Irish Centre in Camden, a charity that has worked with Irish people in London since 1948.

The London Irish Centre has evolved from a bed-and-board charity to becoming one of the most important cultural and helpful resources for Irish people and those of Irish heritage in London. In 2021 alone, they provided more than 12,000 information and advice sessions and welcomed over 250,000 attendees to both in-person and virtual concerts, classes, and social occasions.

Receiving the honor on Sunday, Sheeran said "I think everybody knows how much I love London, and how much it’s been a part of my musical journey so, to receive the Freedom of the City today is something truly special."

He added, “Given my family's Irish heritage, to receive the award from London’s first Irish Lord Mayor, Vincent Keaveny, and alongside London Irish Centre friends, is a bonus."

Thank you, Ed, for your endless support for London Irish Centre! 🇮🇪 pic.twitter.com/h0auIlJYY9

Keaveny said: “Ed Sheeran is one of our most remarkable and best-loved musical talents, and I am delighted to be acknowledging his contribution to the UK by supporting his Freedom of the City of London.

“As the first Irish National Lord Mayor, it also means so much to me to pay tribute to Gary Dunne and Maeve Heath, because their work with London Irish Centre – alongside their other impressive achievements – underlines the warm friendship and cultural exchange between the capital and Ireland.”

I was also so pleased to recognise the hard work of the @LDNIrishCentre's Creative Director, @GaryDunne & Maeve Heath, who has volunteered at the Centre since 1977. Along with Ed, they recieved their Freedoms of the City at Mansion House. pic.twitter.com/XjsDqCDQRJ

Joining Ed Sheeran in being admitted into the Freedom was Dublin-born Maeve Heath, 83, who has volunteered at the London Irish Centre since 1977, and Gary Dunne, the Centre’s Creative Director.

Heath said “It is a great honor to get awarded for doing something that I love! The London Irish Centre has been a part of my life for nearly 45 years. I could never do without it.

“It’s great to see the younger generation coming into the Centre and bringing all their new ideas. That’s the future, and it’s wonderful to see."

Maeve’s journey at the Centre began over 40 years ago and she’s an inspiration for generations to come. Thank you for all that you do for Irish culture and community, Maeve! pic.twitter.com/MwYE55NhQk

Gary Dunne, 42, said: “Like many Irish people, this city has played a central role in my family’s life for generations, so I am honoured and humbled to receive the Freedom of the City of London. To do so with people I know and love makes it even more special.

“Míle buíochas to the Lord Mayor, my friends and family, and the countless Irish people who have helped to make this city what it is.”

Our Creative Director @GaryDunne is a figurehead for Irish culture and creativity in London.

After moving from Dublin to London, he started volunteer work at London Irish Centre in 2006. We’re thrilled to see him receive a Freedom Award today. pic.twitter.com/HGv79EgsVx

The Freedom of the City of London ceremony, which was held at the Lord Mayor’s official residence The Mansion House, was unique in the City’s history in inviting the recipients to respond “I so declare” in the Irish language, by way of acceptance of the Declaration of a Freeman, which was read aloud by the Clerk of the Chamberlain’s Court.