Boston-based U.S. Immigration and Customs Enforcement agents have arrested a former Irish Republican Army fighter and are holding him for deportation. 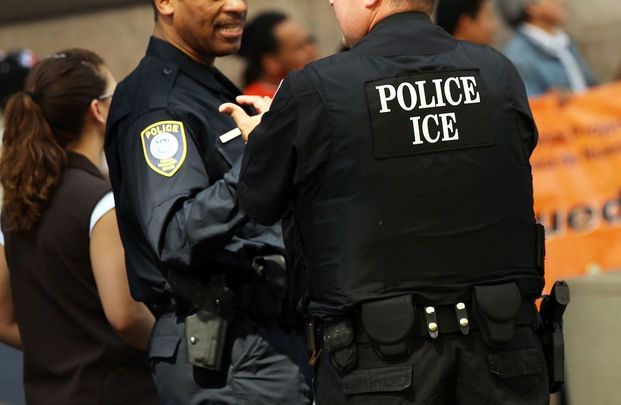 Boston-based U.S. Immigration and Customs Enforcement agents have arrested a former Irish Republican Army fighter and are holding him for deportation.

McMenamin was arrested after Boston police picked him up for leasing a vehicle using fraudulent means and driving with a suspended license. Police handed him over to U.S. Immigration and Customs Enforcement (ICE) once his connections to the car theft were discovered.

Members of the Irish Republican Army turn out at a recent funeral.

“We arrested McMenamin and he is in ICE custody,” a law enforcement official said late Friday.

McMenamin had retained contacts on Irish issues in Boston and had spoken at a Rhode Island Irish history event, in November 2016, hosted by the Sons and Daughters of Erin.

“He talked about growing up in Ireland and how hard it was as a kid,” said a source, who asked to remain anonymous.

“That’s the last time I saw him. It was about three years ago and he was invited to speak to us,” a local Irish American activist told the Boston Herald newspaper.

The bomb that destroyed the police station in 1993 marked the end of the Christmas truce that year. The IRA commenced a prolonged ceasefire in August of the following year.

The blast damaged the police station in Fintona, a small town 40 miles west of Belfast, according to United Press International.

The two innocent bystanders injured, a man and a woman in their 20s, “suffered shock and minor cuts,” the UPI reported.

The two IRA men were arrested. The London Independent reported that “Darcey Gearoid McMenamin, 18, and Dominic Pearse Darcy, 21, both of Omagh, Co Tyrone, appeared at Belfast magistrates' court charged with bombing the RUC station in Fintona 16 minutes after the end of the IRA's Christmas ceasefire. Both were remanded in custody until 28 January.”

McMenamin was later jailed for eight years but paroled as part of a “compassionate release” program tied to the Good Friday Agreement. He then moved to Boston where he lived as an undocumented immigrant until his arrest on Nov 2, 2019.