Father Joseph O’Hare, Fordham University’s longest-serving president and a respected civic leader in New York for decades, died on March 29 at the age of 89. The Jesuit priest served Fordham for 19 years. 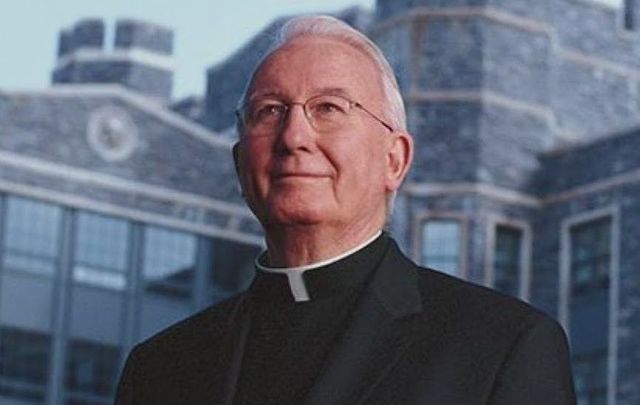 Father Joseph O’Hare, Fordham University’s longest-serving president and a respected civic leader in New York for decades, died on March 29 at the age of 89. The Jesuit priest served Fordham for 19 years.

O’Hare, the grandson of immigrants from Co. Tipperary, was also a founding chair of the Campaign Finance Board in New York City, appointed by Mayor Ed Koch in 1988.

"He was scrupulously honest, fiercely independent and never afraid to speak his mind, even when it rubbed elected officials the wrong way," Bloomberg said in a statement. "In a city of legendary Irish pols, one of the very best never ran for office — but he left a mark on politics like no other."

Supreme Court Justice Sonia Sotomayor also paid tribute to O’Hare: “Father Joseph A. O’Hare was one of my heroes,” she said.

“Brilliant, witty, kind, gentle but firm, Father O’Hare lived his life caring and giving to so many. The nation, the City of New York and the Bronx have lost a great man.  I have lost a friend I greatly admired but whose principles continue to guide my life.”

O’Hare decided that he wanted to become a Jesuit at the age of 17.  After he graduated from the all-boys Regis High School in Manhattan in 1948, a Jesuit institution that still stands as one of the city’s finest, he immediately set out to pursue his goal.

Back then, though, entering the priesthood was far more common than it is now. O’Hare recalled in a 2011 interview with the Irish Voice, sister publication to IrishCentral, that out of his senior class of 100, about 10 of the young men he graduated with also chose the same path.

“It was a different time. And we were very young. I definitely have no regrets. I’ve led a happy life and an interesting one, but if I had a nephew today who told me that he wanted to join the Jesuits out of high school, I would tell him to go to college first. I think it’s much better to have that kind of experience now,” he said.

For several years O’Hare also served as the editor of America magazine, a national bi-weekly published by the Jesuits. He also spent 10 years as a student and teacher in the Philippines, an experience he called one of the most enriching of his life.

O’Hare’s father was a mounted New York City police officer, and civil service was important to him mainly because it provided job security and a pension.  His mother was an extremely accomplished woman especially for the times she lived in – a Phi Beta Kappa graduate of Hunter College in 1921, she went on to teach in the city’s public school system, and gave birth to three children.

“In the generation of my parents, civil service was everything,” O’Hare told the Irish Voice. “They weren’t into the corporate world or finance. They just wanted to be secure.”

O’Hare recalls a childhood steeped in tradition, especially Irish ones. His O’Hare grandparents were from Nenagh, Co. Tipperary, and he remembered several funny stories about how they interacted with one another.

“It was only when I grew up that I realized that she was about 10 years older than he was. She had come here from Ireland first and then sent for him,” he said.

“He was quite the funny one. He would always get up and dance and be the life of the party, but I remember that my grandmother would sit in a corner and kind of frown at all of that!”

Fordham beckoned after a trip to China in the early eighties. O’Hare had received a doctorate in philosophy from Fordham in 1968 and was ordained a priest at Fordham University Church in 1961.  But he had never taught there, and thus was somewhat of an outsider when it came time to choosing a successor to Father James Finlay, who was set to retire as the university’s president.

“Jim Finlay was on the trip to China, and he put my name forward,” said O’Hare, who was editor of America magazine at the time.

O’Hare assumed his new office at Fordham in 1984. “It was a big learning experience for me at first,” he acknowledged, “especially in learning how to deal with the faculty. We had some bumps and bruises along the way, but it all worked out in the end.”

During O’Hare’s 19 years at the helm of Fordham, the university underwent significant reform of undergraduate education and the extensive development of facilities on both Fordham's Rose Hill campus in the Bronx and its Lincoln Center campus in Manhattan. The increase in Fordham's applicant pool from 4,500 in 1995 to more than 11,000 in 2002 is traced, in part, to this strengthening of the undergraduate experience at Fordham.

“I started when I was 53 so it was time. I remember people asking me why I didn’t make it an even 20 years. I told them that I didn’t want to be a conformist,” he laughed.

O’Hare has received numerous honors throughout his memorable career – one of his proudest moments was being awarded the gold medal by the American Irish Historical Society in 1987 by his close friend Dr. Kevin Cahill, the society’s president general – and a host of honorary doctorate degrees.

“A visionary leader, a peerless raconteur, a born diplomat and a compassionate pastor, (O’Hare) led the university with great heart during a period that had more than its share of challenges,” Father Joseph M. McShane, Fordham’s current president said.