Students and parents are "appalled" after female students at Presentation College Carlow were reportedly told that they should "have more respect for themselves." 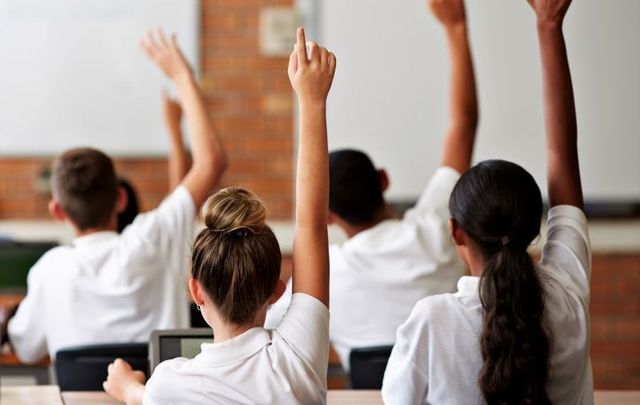 An online petition has been launched following the assemblies at Presentation College Carlow. Getty Images

Female students at Presentation College Carlow, a secondary school, were reportedly told on November 20 that they are no longer permitted to wear tight-fitting clothes as it is distracting to staff. The action has caused “uproar” amongst students and their parents who are “appalled.”

Newstalk reporter Kacey O'Riordan said on Tuesday: "Last Friday, female students were gathered in their year groups by their year heads and spoken to about what they're wearing to PE.

"They were told they can't be wearing tracksuit bottoms or tops that are tight-fitting or showing off the female anatomy was another thing that was said, and they were told that it's distracting to male teachers and that they should have more respect for themselves."

O'Riordan further said: "This school has a PE uniform, but it's the PE uniform as well that they're flagging as an issue.

"If their polo shirt is too tight - one parent even posted on Facebook that in their child's talk they had, they said that if they're a more developed woman that they couldn't be taking off their PE jumper because they're exposing their tight-fitting top."

O'Riordan said there were different talks with different year groups, "so different students got, I suppose, different lines of communication."

"It seems that the older students in the more senior classes, the 5th and 6th years, the 'distraction to male teachers' was mentioned.

"The parents that I spoke to, it almost sounded like they were accusing students and that they said that students were purposely trying to distract the teachers, the male teachers, but the younger groups got a more PG, vague talk it seems."

One parent told Newstalk: "My 12 year old said 'no ankles, no knees, no collarbones, we're not allowed to show any skin ever, basically'.

"[She said] 'we're to remain covered at all times'.

"The older girl, she's 16, they were told they should have more respect for themselves.

"To be showing off their bodies, basically they were using their bodies to distract the male teachers."

Newstalk shared a photo of a typed letter that was posted at the secondary school in the days after the assembly which reads: “Stop teaching women how to dress. Instead, teach men how to respect women.

“In Presentation College Carlow, an assembly was held on 20th of November 2020 in which girls from every year were called out to be told that they could no longer wear any form of tight tracksuits bottoms / leggings.

“In every other instance where there is a change in school policy, all students are informed regardless of gender. In this situation, it was deemed unnecessary.

“The school failed to consider how this would make the female students feel and it has caused uproar across social media platforms. Many influencers have got word of the assemblies and have made it clear that they are appalled at the disrespect shown to female students. Parents and students alike are disgusted, shocked and ashamed.

“A survey was held asking students how they felt during and after the assembly, over 50 students responded from different year groups. Not one of the responses were positive.

“The students all over the school from 1st to 6th year have made it clear that they will not conform to these degrading rules. We feel we deserve an explanation for how the situation was handled.”

A petition entitled "Sexism against female students in school by the staff and students" has since been launched online and has garnered more than 5,600 signatures at the time of publication on Tuesday.

The petition, which was launched by someone who chose to remain anonymous, says: “Today all the girls from each year in Presentation College Carlow were called out by their Year Head/ Dean of discipline and were told that they were not allowed to wear leggings or tight bottoms for PE as they cannot show off the “female anatomy” as it is distracting to the female and male staff of the school- not the students. THE STAFF.

“This is appalling, majority of students are 12-18 years old and should not feel sexualised by their teachers who they are meant to feel safe around. The male students were not aware of the situation going on and did not receive a talk about wearing tight clothes that show off the “male anatomy” which is probably more of a problem, the male students tend to wear tighter bottoms than the female students and nothing is being said to them.

“Why should female students feel oppressed over a body part that everyone has?

On Tuesday afternoon, Kacey O’Riordan of Newstalk shared this statement on Twitter that was provided by Presentation College Carlow: “The rules concerning the correct wearing of our school uniform have not changed since previous years, other than the introduction of a half-zip top for First Year students this year.

Statement re School - PE Uniform Regulations
The rules concerning the correct wearing of our school uniform have not changed since previous years, other than the introduction of a half-zip top for First Year students this year.

“Students are regularly reminded of school rules and regulations at Assembly.

“The school continues to look after the pastoral care needs of all students through its excellent Pastoral Care/Student Support systems in the school.

“Any queries in relation to the above from parents or students will be dealt with in the normal way through the usual school channels.”