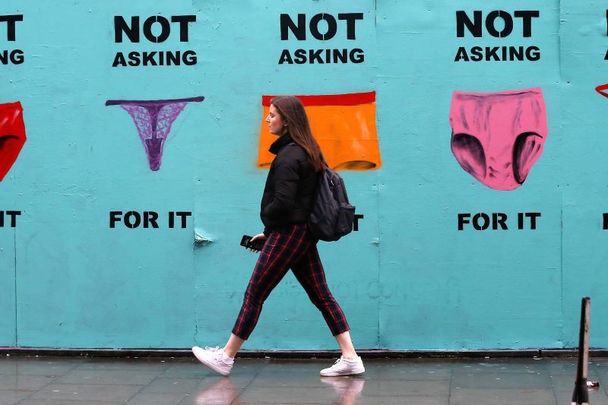 November 2018: A mural installed beside the Bernard Shaw in Dublin in support of the teenage victim whose underwear was discussed in a Cork rape trial. RollingNews.ie

Protests against victim-blaming have broken out around Ireland following comments made in a recent Co Cork rape trial.

During the trial where a 27-year-old man was accused of raping a 17-year-old girl, the teenager’s underwear was brought up in closing arguments.

Read more: Fury as man acquitted of raping teenage girl, her underwear used against her in trial

Senior counsel Elizabeth O’Connell said to the jury: "Does the evidence out rule the possibility that she was attracted to the defendant and was open to meeting someone and being with someone?”

"You have to look at the way she was dressed. She was wearing a thong with a lace front."

The defendant - who maintained the relationship with the teenager was consensual - was ultimately proven not guilty. Now, protesters are slamming what they consider to be victim-blaming in the course of the trial.

After the verdict, ‘I Believe Her - Ireland’ tweeted that they wanted users to share pictures of their underwear with the hashtag #ThisIsNotConsent to highlight that a woman’s choice of underwear does not indicate her willingness to engage in sexual activity or not.

Counsel for man acquitted of rape suggested jurors should reflect on underwear worn by the 17yo complainant. Following this wholly unacceptable comment, we are calling on our followers to post a picture of their thongs/knickers to support her with the hashtag #ThisIsNotConsent pic.twitter.com/ZkVU0GVAIN

At the forefront of the protest is TD Ruth Coppinger who held up a pair of thong underwear while speaking in the Dail this week following the verdict.

I hear cameras cut away from me when I displayed this underwear in #Dáil. In courts victims can have their underwear passed around as evidence and it's within the rules, hence need to display in Dáil. Join protests tomorrow. In Dublin it's at Spire, 1pm.#dubw #ThisIsNotConsent pic.twitter.com/DvtaJL61qR

In the Dail, TD Coppinger said: “Why is nothing yet being done to stop the routine use of rape myths in trials, and how concerned is this Government about the chilling effect this is having on victims coming forward?"

"Nobody who is a victim of sexual violence or rape is ever to blame for the crime committed on them and I believe any defense on those lines is absolutely reprehensible," he said.

Protesters stepped out in both Dublin and Cork echoing TD Coppinger’s statements. Online, people are tweeting pictures of their underwear with the hashtag #ThisIsNotConsent.

Fiona Corcoran from 96FM in Co Cork shared a video of protesters marching through Cork City:

Hundreds march through #Cork city to the courthouse where a 17-year old’s underwear was used by the defence barrister when addressing the jury in a rape trial #thisisnotconsent pic.twitter.com/4yqGcW6XPG

In Dublin, It Stops Now posted a video of protesters chanting “clothes are not consent”:

Crowd is chanting that 'clothes are not #consent': the sense of solidarity, belief and conviction for change is palpable. #ThisIsNotConsent pic.twitter.com/HFNs1C3c2V

Cork Councillor Fiona Ryan tweeted how “proud” she was of the protesters who stepped out:

Deeply proud of Cork today, who came out with fury & demands for change to the rallying call of "Whatever you wear, wherever you go, Yes means yes and no means no!" #ThisIsNotConsent pic.twitter.com/sjKAAC5NVl

One Twitter user asked what kind of underwear girls are allowed to wear:

So what underwear are we allowed to wear? Apparently the cheap penney’s lace fronts that we all own are now a no go. Could we get a list of approved underwear types from Elizabeth O’Connell as apparently she knows which ones do/don’t equal consent? #CorkTrial #ThisIsNotConsent

The Independent reports that “a full review of the legal area involved is now underway by Professor Tom O'Malley, one of Ireland's top legal experts.”

Do you agree or disagree with protesters? Share in the comments