After rape trial verdict, Ireland has its own #MeToo movement - #IBelieveHer 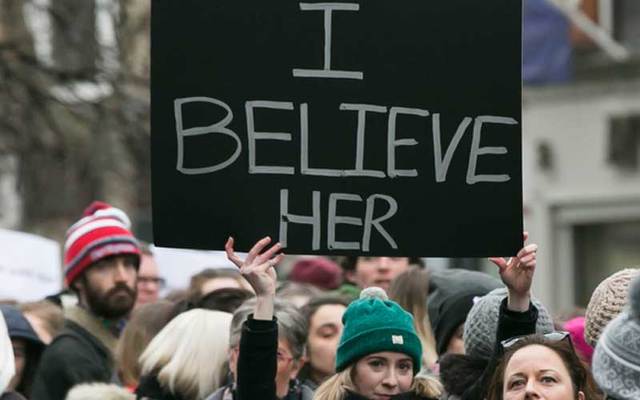 Woman holds up #IBelieveHer sign during a rally in Dublin on Thursday protesting the verdict of the Belfast rugby rape case. Rollingnews.ie

Thousands of people are expected to attend a “We Stand With Her March” at 2pm in Dublin today. Demonstrators will meet at Dublin City Hall and march to the Department of Justice on St Stephen’s Green.

#IBelieveHer started trending worldwide following the Paddy Jackson and Stuart Olding rape trial verdict in support of the woman involved in the case and for other women who are victims of rape.

Paddy Jackson and Stuart Olding, rugby players with Ulster and Ireland, were acquitted of rape on Wednesday by a jury of eight men and three women following a high-profile nine-week trial in the Belfast Crown Court. Two others, Blane McIlroy and Rory Harrison, were also found not guilty in the trial.

She spent 8 days on the stand; the defendants each spent half to a day....
*WHO WAS REALLY ON TRIAL HERE?!?!*#IBelieveHer #IStillBelieveHer pic.twitter.com/GzLMJPihji

Jackson, 26, and Olding, 25, were standing trial for the alleged rape of the same woman in Jackson’s bedroom in his home in south Belfast on June 28, 2016. Blane McIlroy was accused of exposure while Rory Harrison was charged with perverting the course of justice and withholding information. The four defendants were cleared of all charges relating to the alleged incident.

After the verdict, hundreds of people in Belfast, Dublin, Cork, Galway, Limerick and Waterford took to the streets on Thursday to protest the way in which rape is tried in Ireland. The rallies were organized to show solidarity with victims of sexual crime and what many women are made to endure during a rape trial. Thousands of people are expected to attend rallies across Ireland again today.

Paddy Jackson is suing Labour senator Aodhán Ó Riordáin over an allegedly defamatory tweet posted following Jackson’s acquittal. The tweet was sent to a number of people “before it was eventually taken down,” according to a statement issued by KRW Law.

Senior Associate Marie Hans said: "I can confirm we have issued pre-action libel correspondence against a named Senator in the Republic of Ireland. The legal action relates to a tweet sent to a number of other persons before it was eventually taken down."

Ms Hans added: "We will not hesitate to repeat similar legal action against anyone, who deliberately or otherwise, sees fit to attack our client.

"We are examining carefully every item of social media commentary which seeks to challenge the integrity of the jury's full endorsement of our client's innocence. High Court proceedings will issue shortly in both Belfast and Dublin.''

Juror could face contempt of court charge for online comments

A member of the jury from the Belfast rape trial could face a contempt of court charge over comments made online.

The comments made online by the juror have been referred to the office of the Northern Ireland Attorney General by the Lord Chief Justice , and it will now consider whether the comments made amount to a contempt of court, TheJournal.ie reports.

The juror got involved in an online discussion about the trial several hours after the verdicts were delivered, according to RTÉ. The remarks were made in the comments section of an article about the trial acquittals on Broadsheet.ie.

The juror defended her comments, which she has since deleted after instructed to do so by the Lord Chief Justice’s office. The juror claimed her comments did not breach the trial judge’s order not to discuss the jury’s deliberations.

Two people have been questioned by police in Northern Ireland for allegedly naming the complainant in the case online, TheJournal.ie reports.

It is an offense to publish the names of complainants in rape trials in the UK and Ireland. During the Belfast rugby rape trial, the name of the woman involved was allegedly mentioned several times on social media and photos said to be of the woman were distributed online.

A police investigation into the matter is ongoing.