Many people find the west of Ireland to be a place of healing and recovery, but none more so than Queens, NY native Sonia “Sunny” Jacobs and Dublin-born Peter Pringle. 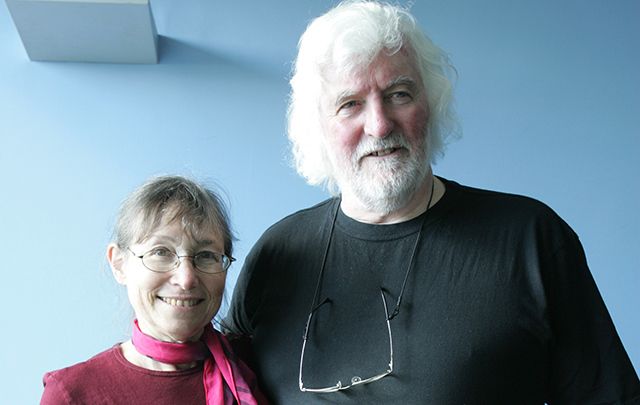 Many people find the west of Ireland to be a place of healing and recovery, but none more so than Queens, NY native Sonia “Sunny” Jacobs and Dublin-born Peter Pringle, both previously sentenced to death for crimes in which they vehemently protested their innocence.

Along with her second husband Jesse Tafero, Sunny, now aged 69, was found guilty of the murder of two policemen in Florida in February 1976. The conviction tore her away from her nine-year old son and ten-month old daughter. She was placed in solitary confinement in Browell Correctional Institution while awaiting her execution by electric chair for the murders she maintained she did not commit.

Accepting a ride from Tafero’s friend Walter Norman Rhodes Jnr. (whom her former husband became acquainted with during a previous prison stint), Jacobs and her two children were in the back of the car when a routine stop by a state trooper and a Canadian constable ended in gunfire and the death of the two officers. Jacobs contended that Rhodes alone was responsible for the gunfire and for keeping her family hostage while he made his escape. Nonetheless Jacobs was charged with murder, her case damaged by a cellmate who claimed to have overheard her confession.

Four years later and thousands of miles away, 41-year-old father-of-four Peter Pringle was suffering with severe alcoholism and recovering from a divorce when he was arrested in a friend’s house for the deaths of two police officers murdered during a bank robbery in Ballaghaderreen in Co. Roscommon.

Pringle, now aged 78, was identified as one of the three men seen in a getaway vehicle fleeing the scene of the robbery. He was convicted and sentenced to be hanged for the crime. Killing a police officer in Ireland was a capital crime at the time, although the death penalty has since been abolished.

The two others arrested for the murders were taken into custody just days after the event. A number of weeks later gardai (Irish police) arrested Pringle, who claims to have been on a 12-day alcohol binge on the day that the robbery took place. The third person has never been caught and the two jailed killers continue to refuse to name their accomplice.

Pringle also claims his case was tarnished by his own previous Republican activity. He was interned at the Curragh as a young man and some believe he should never have been released. He had some peripheral connection with the Republican paramilitary organization the Irish National Liberation Army some years earlier and was arrested at 18 for going on night exercise with that organization.

By 1981, Jacobs had had her death sentence overturned on appeal, but she still had to spend the next 17 years separated from her children. She was still in prison when her husband was executed by electric chair on May 4, 1990, in a botched execution where witnesses claimed to have seen fire coming from Tafero’s head. Jacobs was eventually released when Rhodes admitted his crime after Tafero’s death.

Read more: 62 years ago today the last man was executed in Ireland

Her parents died in the crash of the Pan Am flight 759 in Kenner, LA, in 1982. Jacobs’ children were then sent into the foster system. When she emerged from prison in 1992 she had no family support.

Pringle was also to spend 15 years in prison, appealing his own innocence. The President of Ireland commuted the Dublin man's sentence to 40 years in prison without parole just a few weeks before his scheduled execution.

Peter acted as his own legal counsel from then on until he eventually proved his conviction was illegal as the supposed confession taken by an interrogating officer had been written down before any interrogation had even taken place.

In May, 1995, he cleansed himself of his prison shackles in the waters of Galway Bay, just three years before he would bring Jacobs along to the waters on the west coast to embrace her freedom in the same way.

After her release, Jacobs became a vocal anti-death penalty campaigner, using her own story of wrongful conviction and imprisonment as an example of the dangers of capital punishment. In 1998 she was invited to speak at an Amnesty International event in Galway, and was encouraged by “Galway Girl” singer Steve Earle to get in touch with Peter Pringle. Earle drew comparisons between their two stories.

Although keen to avoid the spotlight after his release, Pringle went to see Jacobs speak in Galway and was moved by her story. He offered to drive her to her next speaking engagement in Cork, but first he suggested a swim in the Atlantic, where he revealed to her his own painful experience.

Jacobs returned to L.A., but six months later she returned to Ireland again, this time to attend a local concert organized by Pringle.

“During that visit, we fell in love,” she told the New York Times in 2011, on the occasion of their marriage in Manhattan.

“We met and became friends and then the friendship grew to more than friendship. We had a sort of a long term relationship for three years. Then, after 9/11 we decided that we would try to live together,” Pringle told the Irish Independent.

“So we gave it a shot and Sunny reversed what her ancestors had done. She packed two big bags and came over to Ireland and has been with me since 2001. About five years ago we got married.”

Hoping to share the healing they both found in Galway, Jacobs and Pringle have since opened their home as a charity center, known as the Sunny Center, a 'safe space' for those who have been wrongfully convicted where they can begin on their reintroduction to society.

To date, nine exonerees from around the world have stayed with the couple and their multitude of pets in what Jacobs describes as a “seaside cottage at the end of the road, by the sea, where we grow our own vegetables.”

L to R. Sunny Jacobs and actor Aidan Quinn at a photocall for the Exonerated, a play based on the true stories of six innocent survivors of Death Row in America.

Jacobs has also become one of the central characters of “The Exonerated,” which made its off-Broadway debut in 2002, with her story being portrayed 29 actresses in total through the years, including Mia Farrow and Susan Sarandon.

More information on the Sunny Center can be found at http://www.thesunnycenter.com/.