Eamonn Harrison, a native of Northern Ireland and a suspect in the October 2019 UK lorry tragedy, has allegedly been involved in other trafficking incidents. 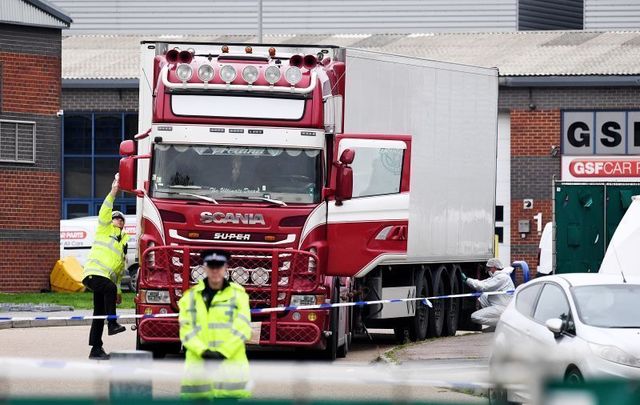 On October 23, 2019, 39 bodies were discovered in the back of a lorry that had arrived in the UK. Some of the suspects are from Northern Ireland. Getty Images

Eamonn Harrison from Co Down is facing extradition to the UK where he is charged with 39 counts of manslaughter.

Eamonn Harrison, one of the suspects named in the UK lorry tragedy that saw 39 immigrants die in the back of a refrigerated lorry, has allegedly been involved in other human trafficking incidents.

23-year-old Harrison, a native of Co Down, appeared at Dublin’s High Court on January 24 where, according to Essex Police, it was agreed that he would be extradited to the UK under the terms of a European Arrest Warrant (EAW). The extradition, however, was granted a stay by presiding Justice Donald Binchy to allow Harrison's legal team to consider an appeal.

In the UK, Harrison faces 39 charges of manslaughter, conspiracy to traffic people, and conspiracy to assist unlawful immigration.

It is alleged that Harrison drove the trailer unit in which the deceased were being transported to Zeebrugge on October 22, 2019, arriving at 1:54 pm with the cargo recorded as “biscuits.” The 39 bodies were discovered in the early hours of October 23 after the lorry docked in the Waterglade Industrial Park, Eastern Avenue, Grays in the UK.

The driver of the lorry, 25-year-old Maurice 'Mo' Robinson who is also from Northern Ireland, was arrested at the scene.

Read More: Man from Northern Ireland to be extradited over 39 counts of manslaughter human trafficking horror

On February 4, Harrison again appeared at Dublin’s High Court where his lawyer, Siobhan Stack SC, requested an appeal against his extradition order. Harrison was ultimately remanded to custody with his next court date set for February 12 as Judge Donald Binchy considers the appeal.

As part of his initial judgment he offered on January 24, Judge Binchy said that Harrison is additionally believed to have been involved in the “transportation of illegal migrants from Zeebrugge Port to Purfleet Port on 10th/11th October 2019, and again on 17th/18th October 2019.

"On the latter occasion, the same trailer as that used to transport the deceased migrants on 22nd/23rd October 2019 was used. The respondent [Mr. Harrison] was identified as being the driver".

Justice Binchy added: “It is stated that on 9th May 2018, the respondent [Mr. Harrison] was stopped at Coquelles, France, driving a trailer unit in which 18 Vietnamese migrants were discovered."

Justice Binchy described the October 23 tragedy: “When paramedics arrived at the scene [in Essex], they found 39 bodies in the back of the trailer and all were dead. Mr [Maurice] Robinson was arrested on suspicion of murder. After Mr. Robinson’s arrest, on the same day, [another named man] made a number of phone calls to the respondent [Eamon Harrison]. It is stated in the additional information that [this man] recruited Mr. Robinson and the respondent in his haulage business.

“While the results of post-mortem examinations are awaited, early indications are that all of the deceased died from hypoxia (starvation of oxygen). Hyperthermia may also have been a factor in their deaths. The refrigeration unit in the trailer was not switched on. The temperature records in the trailer indicate that from 10:35 am hours on Tuesday 22nd October, the temperature in the unit rose consistently until 10:55 pm on that day when it reached its highest level of 38.5 degrees. Thereafter it steadily reduced."