Northern Irish man Eamon Harrison will be extradited to the United Kingdom to stand trial for manslaughter for his role in the deaths of 39 Vietnamese migrants last October. 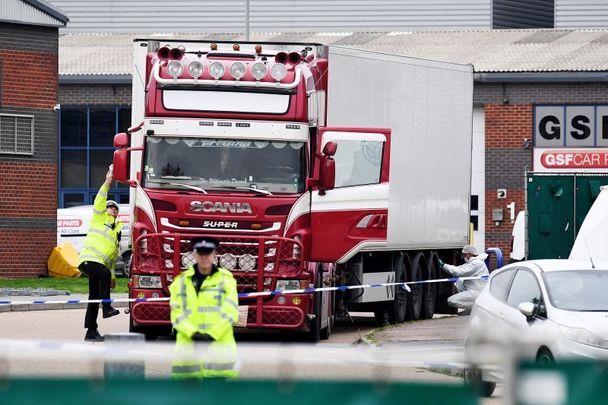 39 Vietnamese migrants were found dead in the back of this truck, in Essex, near London. Getty

A 23-year-old man from County Down will be extradited to the United Kingdom to stand trial for manslaughter for his role in the deaths of 39 Vietnamese migrants last October.

Eamonn Harrison, 23, from County Down, stands accused of transporting a refrigerated container that was found in Essex with the bodies of 39 migrants inside.

The Irish High Court approved the extradition on Friday morning after months of deliberation.

Harrison was arrested in Dublin Port a few days after the bodies were discovered in Essex on Oct. 23, 2019.

Police believe that he brought the container into a port in Belgium before it was transported to England.

Maurice Robinson, 25, from Northern Ireland, already pleaded guilty to assisting illegal immigration at the Old Bailey in London last November and is alleged to have collected the truck from Belgium and transported it to London.

Siobhan Stack, Harrison's barrister, argued against the extradition warrant and claimed that there was no evidence to prove that any migrants were on the truck while her client was driving it. Furthermore, she argues that there is no proof that he was ever aware that there were people in the container.

She also argued in the extradition hearing that there was nothing to say the 39 deceased migrants died while they were in the UK.

The court heard that Harrison brought the container into Belgium through the port of Zeebrugge. He was identified by surveillance footage as having done so and also signed the shipping notice for the same container.

However, lawyers for Eamonn Harrison raised the question as to why the UK was seeking his extradition if the alleged offense took place in Belgium.

Mr. Justice Donald Binchy, who delivered the verdict, agreed not to make the extradition order today in order to allow Harrison's counsel an opportunity to lodge an appeal. He will appear again in the High Court on Tuesday, Feb. 4.