Eamon Harrison of Mayobridge in Co Down, Northern Ireland was arrested in Dublin on Friday and is the second person to be formally charged in relation to the UK lorry tragedy. 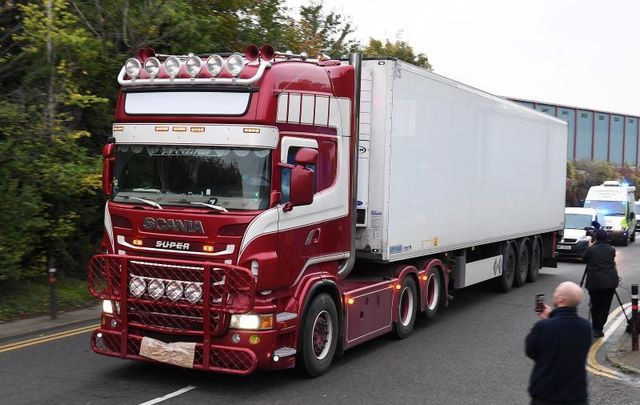 Eamon Harrison of Mayobridge in Co Down Northern Ireland is the second person to be formally charged in relation to the UK lorry tragedy. Getty Images

Eamon Harrison, 23, was arrested in Dublin on Friday as Essex Police renew their appeal for Christopher and Ronan Hughes to come forward

Eamon Harrison of Co Down was arrested in Dublin on Friday, November 1, as he faces charges in relation to the UK lorry tragedy. Harrison is now the second person after Maurice Robinson, also from Northern Ireland, formally facing charges.

Essex Police, who is managing the investigation into the tragedy, issued two new updates on Friday, November 1.

In their latest update, the police force said: “A European Arrest Warrant has been executed in Dublin today, Friday 1 November, in connection with the Essex Police investigation into the deaths of 39 people who were found in a lorry trailer in Grays last week.

“Eamon Harrison, 23, of Mayobridge, [Co Down] Northern Ireland, is charged with 39 offenses of manslaughter, as well as human trafficking and immigration offenses.

“He has appeared before the High Court, Criminal Courts of Justice, Dublin, and remanded in custody.”

Essex Police has started extradition proceedings to bring him to the UK.

The Irish Examiner reports at the Criminal Courts of Justice in Dublin on Friday, Sergeant Jim Kirwan said the arrest warrant for Harrison read: “The case against Eamon Harrison relates to the trafficking and subsequent deaths of 39 people within an arctic trailer unit.

“At 1:38 am on Wednesday, 23rd of October 2019, Essex Police received a call from the East of England Ambulance Service stating they were getting reports of 25 illegal immigrants not breathing within a lorry in the area of Eastern Avenue, Waterglade Industrial, West Thurrock, Essex.

“Police attended the scene. The driver of the lorry was standing at the back of the trailer. He was later identified as Maurice Robinson.

“Inside the trailer was a total of 39 people, 8 females and 31 males who were all deceased.

“Enquiries revealed that the trailer unit had been delivered by a lorry to Zeebrugge, Belgium before being transported to the UK where it was collected by Maurice Robinson from the Port of Purfleet, Essex.

“On October 22, 2019, Eamon Harrison had been identified as the driver of the lorry which was used to deliver the trailer unit to the port in Zeebrugge.

“CCTV, taken several hours before at a truck stop in Veurne, Belgium, shows Eamon Harrison to be the driver of the lorry.

“That lorry deposited the trailer unit at Zeebrugge for its onward transmission to Purfleet, Essex.

“A shipping notice provided at Zeebrugge when the tractor unit arrived at the gate was signed in the name ‘Eamon Harrison’.

“Eamon Harrison traveled back to Ireland in the lorry via a ferry from Cherbourg, France.”

An earlier update on November 1 saw Essex Police renew their appeal for brother Ronan and Christopher Hughes, both from Co Armagh in Northern Ireland, to come forward for questioning.

Christopher and Ronan Hughes, both from Co Armagh, are wanted by Essex Police for questioning (Essex Police)

Essex Police said: “Detectives have urged Ronan and Christopher Hughes to come forward and hand themselves in to police in Northern Ireland.

“Ronan Hughes, 40 and his brother Christopher Hughes, 34 from Armagh, Northern Ireland, are wanted on suspicion of manslaughter and human trafficking in connection with the deaths of 39 people, whose bodies were found in a container in Grays last week.

Speaking in a press conference at Police Service of Northern Ireland Headquarters on November 1 in Belfast, Senior Investigating Officer Detective Chief Inspector Daniel Stoten said: "Today I want to make a direct appeal. Ronan and Christopher hand yourself in to police. We need you both to come forward and assist us with this investigation.

"Finding Ronan and Christopher Hughes is crucial to our investigation and the sooner we can make this happen, the sooner we can get on with our enquires and bring those responsible for these tragic deaths to justice.

“The pair are known to have links to Northern Ireland and Ireland, as well as the road haulage and shipping industries and detectives urge anyone who has been in contact with them or has any information about where they are to get in contact with us.”