One of three men arrested following the deaths of 39 people who had been smuggled has received serious death threats, in County Down, since the story broke. 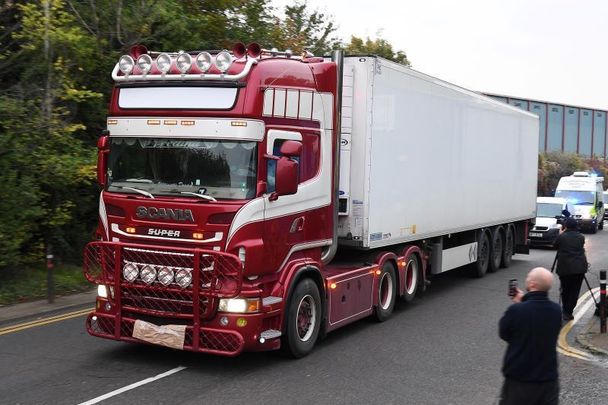 Armagh man, Mo Robinson's truck, while pulled the container containing 39 Vietnamese all of whom died. Getty.

One of three men arrested following the deaths of 39 people who had been smuggled has received serious death threats, in County Down, since the story broke. Meanwhile, eight people have been arrested in Vietnam over the crimes.

A 22-year-old County Down man, Eamon Harrison, facing 39 charges of manslaughter over the 39 people found dead in a truck container in Essex has been receiving "serious" "death threats", along with his family, since the tragic news broke.

Thirty-nine people, all believed to be Vietnamese, were found dead in the back of the refrigerated truck. The temperatures are believed to have been as low as -25C.

Harrison appeared in court in Dublin last week to face charges of 39 counts of manslaughter and conspiracy to commit human trafficking and assist unlawful immigration.

The young man from County Down is said to have driven the refrigerated container, inside which 39 people died, to Zeebrugge, in Belgium before it was shipped to Purfleet, in Essex, England.

Harrison has been told by the police that his life is in serious danger, according to the Daily Mail. A family member told the newspaper "We are talking about serious death threats.

"This has been going on since the story broke over a week ago and it has now escalated since the first arrests were made."

Proceedings have been initiated by UK police to have Harrison extradited so he can face these charges in the coming weeks.

Mo Robinson, the 25-year-old truck driver, from County Armagh, who picked up the container from Purfleet, has been charged with the same charges.

Mo Robinson in a picture from May 2015 (Mo Robinson, Facebook)

Another 48-year-old unnamed man from Northern Ireland was also arrested at Stansted Aiport, in London. Police said he had been arrested on suspicion of conspiracy to traffic people and suspicion of manslaughter.

A Warrington couple, Joanna (38) and Thomas (38) were held on suspicion of conspiracy to traffic people and on suspicion of 39 counts of manslaughter. They have been bailed until next month. The couple told the press that they had previously owned the container in questions but had sold it.

Police are continuing to search for County Fermanagh brothers, Ronan (40) and Christopher (34) Hughes in relation to the crimes.

Vietnam police and the victims

Reuters relayed that the local press agency Vietnam News Agency (VNA) reported this news on Monday. A province police chief Nguyen Huu Cau “Based on what we learn from the suspects, we will actively launch investigations to fight and eradicate these rings which bring people illegally to Britain.

“The best thing to do now is to deal with the consequences of the incident and help family members receive the bodies."

Police in Vietnam are treating the deaths as a smuggling incident rather than that of human trafficking.

According to Reuters "Most of the victims were from the Nghe An and the neighboring province of Ha Tinh, in north-central Vietnam, where poor job prospects, encouragement by authorities, smuggling gangs and environmental disaster all fuel migration."

A spokeswoman for Vietnam's Ministry of Foreign Affairs called the incident a "serious humanitarian tragedy".