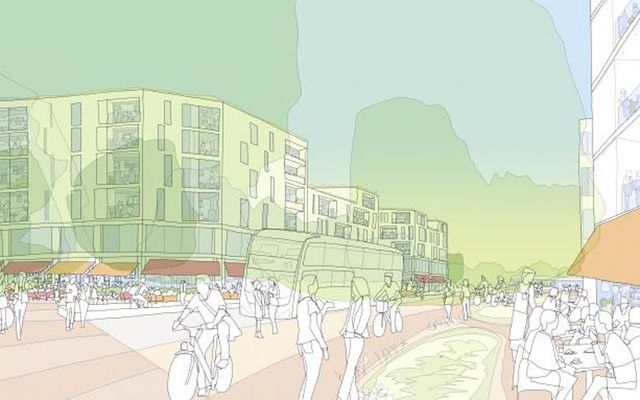 Plans have been announced for the City Edge Project, a "car-free" town to be built at the western edge of Dublin City.

The town would accommodate a population of 85,000 people. In addition, the plan has the potential to create 75,000 new jobs, with €13 billion a year being contributed to the economy, Joe.ie reports.

The project, one of the largest regeneration schemes in Europe, aims to create "a new liveable, sustainable and climate resilient urban quarter at the western edge of Dublin City."

The town will be comprised of five new neighborhoods based around the "15-minute city principle," which means residents would rely primarily on walking, cycling or using public transportation.

According to DublinCity.ie, the City Edge Strategic Framework is a non-statutory plan that "sets out a long-term, high-level vision and strategy for the regeneration of the area" over the next 50 years.

"Following on from detailed analysis of the area and public consultation between September and October of 2021, the City Edge Strategic Framework has been formulated and comprises a non-statutory plan that sets out a long-term, high-level vision and strategy for the regeneration of the area over a 50-year timescale," reads the joint statement.

According to the plans, the longer-term vision for the area is to create a "car-free residential development."

"It is acknowledged that the full realization of the City Edge vision will take a number of years to achieve as land use and infrastructure will be delivered on a phased basis," it states.

"In this transition period, there will still be a level of demand for private transport as key services may not be available."

You can learn more about Dublin's City Edge Project here.