WATCH: This Pride video from Dublin Bus about senior LGBTQ+ people is a tearjerker

'The Long Road to Pride,' a new video from Dublin Bus, tells the heartwarming stories of senior Irish LGBTQ+ traveling to their first ever Pride event. 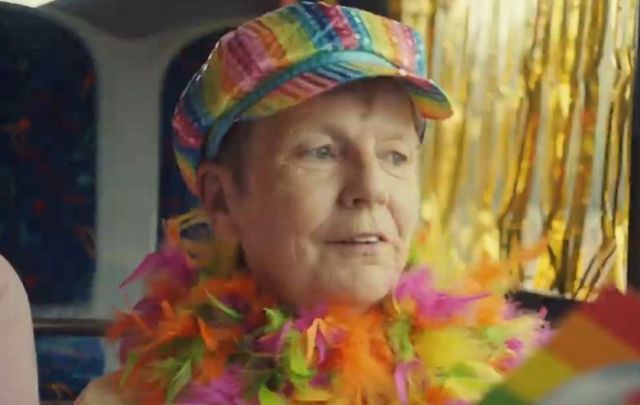 Dublin Bus has shared a heartwarming video about senior Irish LGBTQ+ people who took part in Dublin's Pride celebrations for their first time ever.

The video sees each Irish person recount growing up in Ireland and their individual struggles with coming out in a country that by and large did not welcome them. In Ireland, homosexuality was not decriminalized until 1993. In 2015, however, the legalized same-sex marriage by referendum vote, making it the first country in the world to do so by popular vote.

Dublin Bus shared the tearjerker of a video on Twitter on July 1:

For many, the road to Pride is a long one. This year, we were lucky enough to give some older members of Ireland’s LGBTQ+ the Pride they never had. We hope you enjoy it as much as we enjoyed being a part of it. #TheLongRoadToPride #DBPride pic.twitter.com/0UrZBhS0Tp

Antidote Films, who produced the video, said they were "delighted and proud" to be involved:

We are delighted and proud to share this new film by Ken Wardrop for @dublinbusnews & @Rothco , produced by @AntidoteFilms. We want to give an enormous thank you to the people who shared their stories and experiences to create this film. #TheLongRoadToPride #DublinPride2019 https://t.co/j1ICnKnF5I

Rothco, the advertising agency behind the project, said the video helped highlight the importance of Pride:

As the glitter settles on the proudest month of all, the older generation of the LGBTQ+ community remind us just how important Pride is. Join Dublin Bus on #TheLongRoadToPride https://t.co/PXPsTXTABD

Of the video's premise, Rotcho wrote: "Of the 60,000 attendees at Dublin Pride 2018, less than 1% were over the age of 65. Despite their crucial role in the queer liberation movement, they are often forgotten and are more likely to have become disconnected from the community. So, although they’ve never needed it more, they can’t find a way in, even at Pride."

As a response,  "Dublin Bus decided to rectify this and give them the Pride they never had. They created a special route to bring them into the community. "

Read More: Having a gay auld time - how times have changed for the better

Signaling a dramatic sign of the times, the responses to the Dublin Bus video on Twitter were largely supportive:

Sitting in the US watching this & so happy for everyone represented here. (Tears flowing, of course!) Last year I returned to Ireland for 1st time in years. My traveling with my wife and kids was never an issue anywhere we went, including visiting relatives. Happy happy Pride!

Its such a shame that so many people had to endure years of suffering in silence.
Now I understand why it means so much to march for #Pride 

Well, thanks so much for making me bawl!  I wish every Pride celebration had the 'get the elders out' contingent - This is just so great - Yay for the elders! ️‍️‍️‍️‍️‍

In 2018, Dublin Bus created a similar video for Pride entitled ‘Proud Dads,’ which showed Irish fathers surprising their LGBTQ+ children by accompanying them to Pride:

What do you think of 'The Long Road to Pride'? Let us know in the comments!