Creeslough prepares to remember the 10 people killed in Oct when an apartment building, above the local shop, exploded. 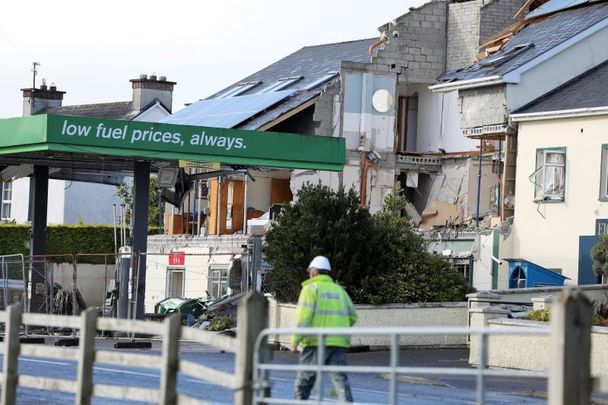 The aftermath of the explosion in Creeslough, County Donegal. RollingNews

Creeslough families prepare for a series of heart-rending month’s mind Masses following the tragedy which claimed 10 lives in the County Donegal village on October 7. The month’s mind is a requiem Mass celebrated by Catholics in memory of the deceased a month after a person’s death.

As Creeslough prepares for the sorrowful reminder, one family which lost two members in the tragedy has thanked children’s author, comic and TV personality David Walliams for his special message of support to the local national school, Scoil Mhuire.

Walliams, whose children’s books have sold over 26 million copies worldwide, sent a video to Scoil Mhuire in which he said, “Like everyone else in the world I heard about the tragic accident in the village of Creeslough. And I wanted to send all my love to everyone affected by it, particularly you guys at the local school, Scoil Mhuire, and I’m sending some books to the school.

“I hope they will cheer you up. I want you to know, you’re not alone, you’re in my thoughts the whole time and I’m sending all my love to you.”

Scoil Mhuire, which posted Walliams’ video on Facebook, said they were “humbled and honored” to have received this message of support for their pupils and community from the popular children’s book author.

Aine Flanagan, the mother of five-year-old Shauna Flanagan-Garwe and the wife of 50-year-old Robert Garwe, who both died in the tragedy and were found with their arms wrapped around each other beneath the rubble, posted a message of thanks to Walliams following his gesture of support.

The grieving mum said, “David, thank you. I lost my husband Robert and my beautiful daughter Shauna in the tragedy in Creeslough. My nephews and nieces have all read your wonderful books. Pray for our injured.”

Ten lives were claimed and there were eight injuries in a village of 396 population when an explosion destroyed a block of apartments and the adjoining Applegreen filling station.

Gardai say they are following over 500 lines of inquiry into the tragedy. An extension to preserve the scene of investigation to November 27 was granted by the High Court last week.

A garda statement said, “We understand and appreciate the impact on the community and the ongoing inconvenience and disruption caused due to the continuing scene preservation which is necessary to assist the investigation.

“A careful and systematic approach is being taken to the forensic examination of the scene due to the structural instability of the building which is being closely monitored by personnel on site.”

The statement added that the current road closure on the N56 through Creeslough will remain in place.