Father and daughter killed in Creeslough explosion laid to rest

Shauna Flanagan Garwe, 5, and her father Robert Garwe, 50, were laid to rest in a joint service on Saturday. They were the last of the 10 victims of the tragic explosion to be laid to rest. 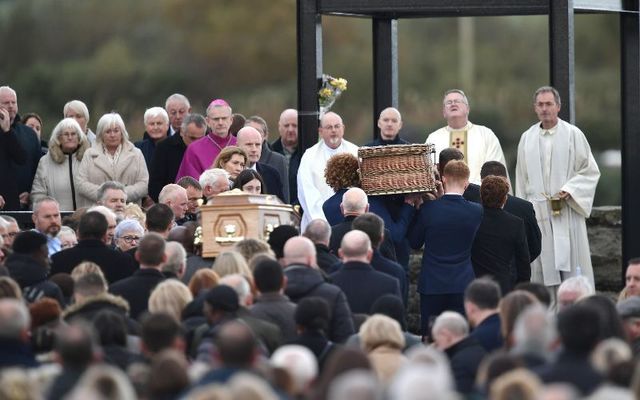 The five-year-old girl and her father who were both killed in an explosion at a gas station in County Donegal last week have been laid to rest following a joint funeral service on Saturday.

Shauna Flanagan Garwe and her father Robert Garwe, 50, were both killed following an explosion at the Applegreen service station in Creeslough, County Donegal, on Friday, October 7.

Robert had taken his daughter to buy a birthday cake for her mother at the time of the explosion.

President of Ireland Michael D. Higgins was among the mourners to pay their respects to Robert and Shauna at Saturday's service at St. Michael's Church in Creeslough.

Creeslough residents lined the main street of the village to pay their respects ahead of Saturday's service as two hearses arrived at St. Michael's Church side by side.

A number of photographs of Shauna were placed on the church's altar, alongside bouquets of flowers and 10 candles - one for each of the victims who perished in the tragedy.

Creeslough parish priest Fr. John Joe Duffy began the service by offering his condolences to Robert's partner and Shauna's mother Áine and welcomed family members who had traveled to the service from Robert's native Zimbabwe.

Fr. Duffy told mourners that Robert worked in construction and could often be seen traveling through the village on his scooter.

Mourners also heard that Shauna had started school at Scoil Mhuire National School in the village just weeks ago.

Shauna, who was the youngest victim to die in the explosion, was someone who "loved to entertain", Fr. Duffy said.

"Shauna could always be heard with a giggle, and when sitting down she sure did like to wiggle," he said.

"On her pink scooter she would come to the gate, with Kylo in tow, her little dog mate. So chatty and bubbly she just loved to play and have fun with her friends each and every day."

Fr. Duffy also described Shauna's love for animals and art, adding that she would have gone on to become a "great vet".

The priest said he would remember Robert for his "friendliness" and for his "beautiful love for little Shauna".

President Michael D. Higgins, who has attended the funerals of most of the Creeslough victims, told the Irish Times that it has been an "extraordinary week" in Donegal.

"First of all the great loss that this community has suffered has in many ways resonated not just to our country but to the Irish people abroad, and the messages that have come have been very important to the community," Higgins said.

All 10 of the Creeslough victims have now been laid to rest.

The funerals of Martin McGill, 49, and fashion student Jessica Gallagher, 24, took place on Tuesday, while the funeral of Sydney native James O'Flaherty, 48, took place in Derrybeg on Wednesday. A joint funeral mass for Catherine O'Donnell, 39, and her 13-year-old son James Monaghan also took place on Wednesday.

Martina Martin, 49, a mother-of-four who worked at the Applegreen service station, was laid to rest on Thursday, while 14-year-old Leona Harper, who went to the shop to buy ice cream, was laid to rest following a service in nearby Ramelton.

The funeral of Hugh Kenny, 59, the oldest victim to die in the tragedy, took place at St. Michael's Church on Friday.