Irish police said in an update that the Creeslough explosion scene will be preserved through November 27 as its "extensive investigation" continues. 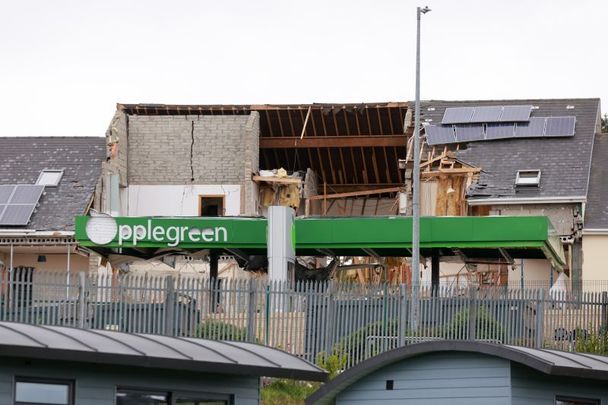 October 13, 2022: The Applegreen petrol station scene at the site of the explosion in Creeslough, Co Donegal. RollingNews.ie

An Garda Síochána said in an update today, October 27, that they are continuing “to investigate all of the circumstances into cause of a fatal explosion at a building complex in Creeslough, County Donegal” that occurred on Friday, October 7.

An Garda Síochána thanked the local community in Creeslough, Co Donegal and the general public for their ongoing assistance in the investigation of this explosion.

The current road closure on the N56 through Creeslough will remain in place, An Garda Síochána said on Thursday while also thanking the community for their patience and support regarding traffic diversions.

An Garda Síochána said that it has made a further application before the High Court to extend the period of the preservation of the scene, under Section 5, Criminal Justice Act, 2006. This extension has been granted to November 27, 2022. The purpose for the preservation of the scene is to ‘preserve, search for and collect evidence’ to facilitate the ongoing investigation.

This investigation is being coordinated from Milford Garda station where an Incident Room has been established under the direction of a Garda Senior Investigating Officer. The investigation is being assisted by, amongst other Garda sections, the Garda National Bureau of Criminal Investigation (GNBCI), Garda Analysis Service, Garda Technical Bureau, Garda National Traffic Bureau (GNTB) and Garda Air Support Unit (GASU) together with enquiry teams are made up of Gardaí attached to Local, Divisional, Regional and National units.

A Memorandum of Understanding has been agreed upon and signed between An Garda Síochána, the Health and Safety Authority, and the Commission for the Regulation of Utilities to facilitate the sharing of information and resources between the agencies.

DNV – Det Norske Veritas – a global company specialising in the investigation and testing of energy systems, remain on site.

An Garda Síochána said a "careful and systematic approach" is being taken to the forensic examination of the scene due to the structural instability of the building, which is being closely monitored by personnel on site. Structural engineers are in attendance at the site to assist in this investigation and to ensure as safe a working environment as possible.

This is an extensive investigation. To date: