A team of international experts in blast analysis has joined the investigation to determine the cause of the fatal explosion that occurred in Creeslough, Co Donegal. 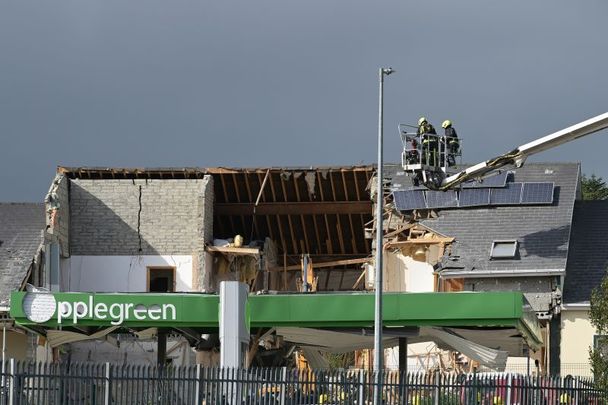 October 8, 2022: Emergency services attend the scene following an explosion that occurred on October 7, 2022 at a petrol station in Creeslough, Co Donegal. Getty Images

An explosion at a gas station/apartment complex in Creeslough, Co Donegal last Friday killed 10 people and shocked all of Ireland. An investigation into the cause of the explosion is underway, as locals in the town of Creeslough struggle to make sense of what happened.

Although examination of the cause of the explosion in Creeslough will continue for several more days, the initial suspicion is it was due to a gas blast in an apartment complex adjoining the Applegreen service station.

A team of international experts in blast analysis has joined the investigation.

CCTV footage taken by investigators from a nearby building shows the blast that cost 10 lives most likely occurred in the apartment complex that toppled onto the Applegreen station on Friday, October 7.

Garda sources say the footage shows the windows of an apartment on an upper floor being blown out. The block appears to have collapsed on top of the station’s forecourt seconds later.

Investigators suspect that the tragedy was caused by an accidental leak linked to a large container outside the complex that supplied gas to the apartments inside. RTÉ reported that there is no piped gas in the location.

It also reported that, in the hours following the explosion, petrol and diesel in tanks underground that supplied distributor pumps were drained away as a safety precaution for the recovery and investigation operation.

(As clarification for US readers, gas in Ireland usually refers to an air-like substance that burns easily for cooking and heating. The fuel that fills motor vehicles from forecourt pumps is called petrol and diesel, not gas).

Such was the horror of the deaths and eight injuries in a tiny village with a population of 396 according to the most recent census, that local priest Father John Joe Duffy said “the heart of this village has been broken by a tsunami of grief.”

A message of condolence from Pope Francis was delivered by Bishop Alan McGuckian who visited the scene and officiated at a Mass for the grieving community.

McGuckian said the Pope was “saddened to learn of the loss of life and destruction caused by the explosion in Creeslough” and expressed “his spiritual closeness to all those suffering in the aftermath of this tragedy.”

UK Prime Minister Liz Truss was moved and sent deepest sympathies “to the families and friends who have lost loved ones, and to the entire community of Creeslough as they come together in their moment of grief.”

We thanked them for their incredible work responding to the terrible tragedy at Creeslough.

Their dedicated work and service is an inspiration to all. pic.twitter.com/wXaxzr5Ka0

Daylight and candlelight vigils took place across the north-west and in many parts of Ireland to reflect the nation’s sorrow over the Creeslough tragedy.

A massive fund-raising operation set up by Applegreen and An Post raised more than €300,000 in 24 hours, including £10,000 sterling from Celtic Football Club in Glasgow, Scotland, which has a large Donegal following.