Did you know Ireland has an Amish community?

The Amish-Mennonite community of 75 people in Dunmore East, Co. Waterford was founded by an Irish American in 1992. 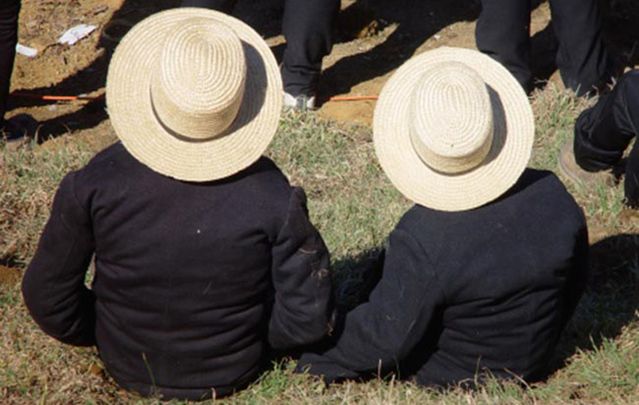 The Amish-Mennonite community of 75 people in Dunmore East, Co. Waterford, founded by an Irish American, is largely made up of immigrants. Thinkstock

Did you know that Ireland has an Amish population? The Christian Fellowship of Dunmore East, Co. Waterford, Ireland’s only Amish-Mennonite community, is about 75 people strong.

It was founded in 1992 by William McGrath, an Irish American who converted to the Mennonite branch of Christianity after fighting in WWII and went on to establish Mennonite churches around the world, including in the homeland of his ancestors.

The community, which runs a popular grocery, bakery, wood furniture shop and bookstore called Jaybee’s, is made up mostly of immigrants to Ireland. Its leading pastor, Daniel Yoder, and his wife Barbara, who have been there since the beginning, came to Ireland from Apple Creek, Maryland, the Amish stronghold where they grew up.

The Amish presence in Ireland has steadily increased since then, with arrivals from the US, Poland, Ukraine, South America, and even a family of converts from Wales. While still small, the community is especially notable when you consider that the Amish are one of the fastest-growing populations in the world and potentially the fastest growing religious group in the US, projected to reach 1 million by 2050.

In a 2014 article for the University Times, a student newspaper at Trinity College Dublin, Rachel Lavin spent a Sunday with the Amish of Dunmore East and shared her insights into their way of life, beliefs, and customs that challenge many assumptions about the Amish today.

To start, they use iPads.

The Dunmore East congregation is part of the Beachy Amish Mennonite faction, which emerged in 1927 and is known for being more open and adaptable than other Amish groups. Where some, such as the Old Order Amish, completely eschew modern technology from electricity right through to the internet, the Beachy Amish drive cars, live in modest contemporary homes and use phones and the internet.

“Their use of these modern appliances is done with a studied carefulness,” Lavin explains, “limited to their role in their spiritual goals.”

"'With each new technology coming out we question if we need it or not if it furthers our cause and adheres to our morals,' says Barbara Yoder, the pastor’s wife. Phones and the internet (the congregation has its own website) keep them in touch with other like-minded Amish around the world. Newspapers let them stay aware of current events. At one point during Lavin’s visit, an iPad is passed around to show children a photo during story time."

Access is still subject to guidelines and personal judgment, though. “The Waterford Amish shun TV and radio but will watch selected films or play C.D.’s. This is because, as [Pastor] Dan explains, "this way you choose what you are exposed to.’ What they are avoiding is modern popular culture, something they consider full of sinful distractions and unnecessary frivolities.”

This balance is best summed up by one of the community’s young girls, who knows who Enda Kenny and Barack Obama are but thinks the name Kim Kardashian might come from an Irish legend.

With their traditional modest attire – shirts and pants for the men; long dresses or skirts and white cloth head coverings for the women – the Waterford Amish do stand out from the local Irish community. There have been some instances of tension over the years, including robberies at their shops. This presents a tricky situation for the Amish, who are pacifists and normally deal with any crime or trouble internally. In cases like this, Pastor Dan explains, “we go to the local Gardai but we see these crimes as a moral or spiritual problem. Even with outsiders, we don’t involve the law in trying to put them in jail or for legal justice, but more to help that person… We would not press charges and, failing that, we would let the law take its course but seek restorative justice.”

Though they remain separate from the local community, the Amish are liked and respected. Their handmade furniture and baked goods make their shop especially popular. They welcome members of the public to join their weekly services and note that church members include local Irish people as well as resident immigrants from a variety of countries.

They quietly go above and beyond when a nearby family has suffered a loss – showing up to wash windows and tend to the property completely unasked and refusing any compensation.

Working with Ireland’s Health Services Executive and social services, they have also founded Camp Comeragh, a wilderness program for troubled youths that combines counseling with survival skills and lessons in independence and responsibility.

So why Ireland? In addition to the special connection for the community’s founder, the website for the Dunmore East Christian Fellowship notes that “Since the Amish and Mennonites had their beginnings in Europe, we feel a special attraction in returning to the lands of our ancestors, continuing the faith and practice of faithful believers over the centuries.” The Amish church began in Switzerland in 1693 with a schism among the Swiss Anabaptists.

Above all, they say, “It is our desire to be good neighbors and to be of service to the people in our community. In addition, we want to maintain a fellowship of believers where anyone can feel welcome to worship the Lord with us.

“Our purpose is to glorify God by living for Him, and showing by example that the Christian life is a joyful, productive life, that Jesus is the Answer to every person’s deepest needs, and that the Bible is the Foundation on which we can safely build our lives.”