Blinded at the age of ten, by a rubber bullet, this Irishman and the soldier who shot him have become close friends. 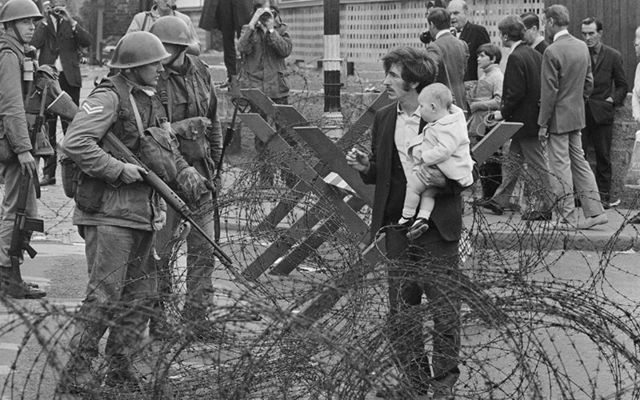 British soldiers and civilians photographed in Northern Ireland, during the Troubles, in 1969. Getty

In 1972, this Derry man's sight was taken from him by a rubber bullet, the gun fired by a Royal Artillery soldier. Their friendship has been hailed by the Dalai Lama.

Richard Moore was ten-years-old he was shot at and lost his sight. The young boy was walking home from school past a military checkpoint in Derry, in 1972. The man responsible was former British soldier Charles Inness. In 2006 the men met for a BBC documentary in 2006 and have been in contact ever since.

In a Sunday Times interview, More admitted that Inness (78), originally from Whitsome, in the Scottish Borders, had apologized.

Moore (59) is a father of two and the Founder of the charity Children in Crossfire. He told the Sunday Times "They say sorry is the hardest word and for years Charles had his own logic for not doing so but he has [said it] now.

“Charles was of the opinion that when you say ‘sorry’, it means that you didn’t mean to fire the bullet. He’d say, ‘I meant to fire the bullet but I never meant to cause the damage’. But the more I talked with Charles and the more we got to know each other, I always felt that he was sorry. He just couldn’t bring himself to say it.

“And then, years after we first met, we were talking one night and he said to me: ‘Richard, I am sorry.’ When it came, it was really moving. I didn’t need it, I didn’t ask for it.”

Inness, a former captain in the Royal Artillery, said: “I’m sorry that the bloody Troubles in Ireland ever occurred. I’m sorry that so many people died on both sides. It was a ghastly situation where I ended up blinding Richard but many years later, the whole thing changed.

“I can’t explain why but we both felt we’d known each other all our lives.”

He added: “The most remarkable thing is that Richard invited me to do a talk to 150 people at the old police station, where this incident occurred. It is now a community center in an area that still has certain sympathies towards the IRA. I could detect an atmosphere of, not unnaturally, hostility towards me as a former British soldier, but by the time we finished our talk there were a lot of people in tears and virtually everybody there came up to thank me for coming.”

Speaking to the Irish Examiner Inness said "I was 30 at the time; 1972 was the most unpleasant year of the Troubles, the violence was unbelievable, almost on a daily basis a soldier, a police officer or a prison officer was killed or seriously injured.

“The intention of firing the rubber bullet was to get youths who were in the process of throwing stones and generally causing mayhem around a post, which was an RUC [Royal Ulster Constabulary] station.

“We were there to protect it, and I fired a rubber bullet, one of thousands fired that year, the vast majority of which gave little more than a bruise, and unfortunately the one I fired horrifically nearly killed poor Richard.

“Years later, when we met, we immediately got on exceptionally well, we had a bond and have formed a great friendship.

“At some stage, I certainly said to Richard ‘I am awfully sorry this happened’. As I say to other people, the intention of the rubber bullet was no more than to get the people who were causing the problem to go away.

“That was the sole intention; the idea I had intended to damn nearly kill a 10-year-old child was never there.

“I had children of a similar age myself, and the last thing in the world I wanted to do was damage a child. But the only means we had of trying to disperse people being violent was a rubber bullet gun.

"The great regret remained with me for a long time."

Moore has never let his blindness slow him down. He garnered a university degree and has run the New York marathon.

Recently his charity, Children In Crossfire, which has raised millions to help youngsters worldwide, was awarded a £250,000 grant through the Department for International Development. This will help provide 100,000 children in the Dodoma region of Tanzania with an education.

“Through supporting projects like this, over the past year, the UK Government has helped to build more than 3,000 primary classrooms in Tanzania, helped train almost 54,000 teachers in over 5,000 schools, and set up almost 1,900 community pre-schools.”