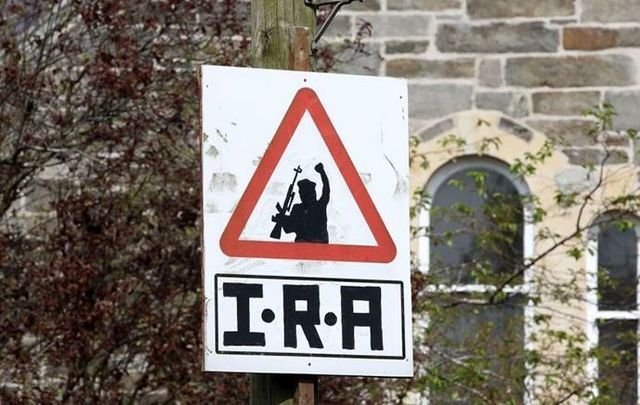 A sign in Derry supporting the IRA, photographed in 2019 after the murder of journalist Lyra McKee at the hands of the New IRA. Getty Images

Ten people have been charged in recent days as part of Operation Arbacia, which is targeting the New IRA, the largest dissident republican group.

“This is an ongoing and coordinated investigation into the activities of the New IRA and involves partners such as MI5, Police Scotland, An Garda Siochana, and the Metropolitan Police Service.

“Eight people have now been charged with a total of 34 terrorist offences.  All have been remanded in custody.

“And I can now confirm a ninth person has been charged with four terrorist offences."

Gray added in her statement: “This investigation did not start last week and it will not end this week. Today what I want to discuss is the broader focus of Arbacia going forward.

“It is a longer term investigation that will look into every aspect of the activities of the New IRA in its entirety.

“Keeping the public safe is at the heart of this operation."

Gray continued: “It’s really disappointing that decades on from the Good Friday Agreement there are still groups who are using and hiding bombs and bullets in residential areas and putting their own agendas above the rights of the community who want to live and thrive in peace.

“Communities are key and have shown their power in coming together to protect each other during a global pandemic. Now is the time to continue that effort

“Policing with the community is at the heart of what we do, we are committed to working with communities, towards meaningful change.”

The New IRA claimed responsibility for the death of Lyra McKee who was shot while observing a riot in Derry on April 18, 2019.

Read more: A detailed look at the IRA escape from Maze Prison in 1983